In February 2018, Craig Wright, who called himself "Zhong Ben Cong", was sued by Dave Kleiman's brother Ira Kleiman for stealing about $5 billion in bitcoin from business partners.

(The deceased Dave Kleiman is a partner of Ao Bencong. It is rumored that the two had shared the pseudonym "Zhong Ben Cong". After the death of Dave Kleiman, Oban was accused of embezzling Dave 1.1 million bitcoins.

After a year of tug-of-war, the lawsuit between Kleiman and CSW finally made some progress.

After CW sworn in, the plaintiff believed that CSW categorically refused to answer questions about his bitcoin address and marriage and needed to reassess. But the legal team at CSW said that he has done everything he can to comply with the court’s order.

The first 70 blocks and the so-called " Blind Trust "

Kleiman’s lawsuit against CSW has begun to heat up. The plaintiff hopes to claim more evidence from the CSW who claims to be Nakamoto. Kleiman Heritage Management represents David Kleiman, a security researcher who has died. Some people think that Kleiman may be a member of a pseudonym organization operated by Nakamoto. According to Ira Kleiman, the legacy of his brother David was manipulated in years of cooperation with the Australian CSW.

CSW refused to answer questions about his current and former wife, as well as certain questions about his alleged bitcoin address. CSW claims that it owns the addresses of the top 70 blocks mined in the Bitcoin blockchain and provides some information about the Blind Trust .

But Bitcoin security expert Wizsec studied the addresses and said that the CW's proprietary statement is still meaningless.

In addition, one of the addresses used in the case (CSW claims that the address was forged) was signed by the real owner on May 16, 2019. The legal owner of the address refers to the CSW as a scammer in the signature information.

A court document dated June 11 described in great detail the reasons why CSW may not be able to disclose certain information related to the so-called trust. CSW’s lawyers stressed to the court that “the conduct of court documents is wrong.” CW’s lawyer said: “CSW is the person who best explains how bitcoin is being mined and stored in trust funds.” Describe the complexity of the Blind Trust

According to court documents, CSW designed a unique algorithm after mining the top 70 bitcoins.

The algorithm automates the key generation process so that after the 70th block is mined, subsequent blocks are assigned to different public addresses.

This means that after the implementation of the program, these tokens were directly mined into the Blind Trust .

The document also stated that all mining equipment used by CSW to process Bitcoin blocks during 2009 and 2010 was disposed of. “It did not retain any list of bitcoin-related public addresses that he had mined after the first 70 blocks,” the file explained. "CSW stopped mining at the end of 2010, when the value of Bitcoin fluctuated between $0.06 and $0.29.

The defense document continues to write:

The private key required to access the encrypted file contains the data needed to retrieve information about the bitcoin. The CSW mined after block 70 has been split into multiple key shares via the "Shamir's Secret Sharing Algorithm" version. An algorithm created by Adi Shamir to divide a secret (such as a private encryption key) into multiple parts. After using Shamir's secret sharing algorithm, CSW insisted on assigning keys to multiple people included in the Blind Trust . The system used by CSW and his partners allows no single participant to extract information. CSW itself does not have the ability to access encrypted files. "CSW does not know the public address of the bitcoin held by the trust company (ie, from 2009 to 2010, CSW mined bitcoin after the first 70 blocks. "This document seems to indicate that due to the complexity of the secret trust and the key being transferred In a confidential trust with multiple owners, CSW does not have enough information to claim ownership. 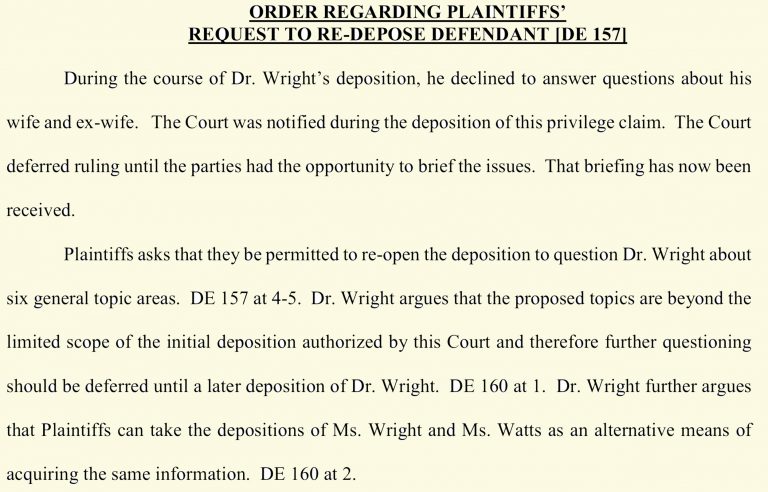 The plaintiff does not buy the account , the encrypted community continues to verify the facts.

It is reported that the plaintiff still hopes to obtain a complete public address list of all bitcoins mined before December 2013. An order signed by the judge showed that CSW must submit the list by June 17, 2019, and if he could not comply, the court could hold a justified evidence hearing. The defense believes that Kleiman's request for CSW to certify every document related to the trust is obviously a cumbersome and unreasonable job. ”

Subsequently, the CW litigation team pointed out on June 11 that CSW produced hundreds of documents related to the trust, including documents that he did not sign or prepare.

The documents of the Kleiman and CSW lawsuits in the past few weeks have opened more doors for this seemingly endless “rabbit hole”. The motion to apply for a protection order in Document No. 187, recently filed by CSW, has been extensively revised due to fears of retaliation by criminals. And this information opens another "rabbit hole."

Many cryptocurrency fans who watched the case from abroad have been questioning some of CSW’s statements to date. For example, Vin Armani of Cointext and Dustin Dreifuerst of the podcast Didyouknowcrypto.com (DYKC) asked how the token of the 1-70 block would become a confidential trust if he signed the first private key in front of Gavin Andresen.

Bitcoin Foundation member Jon Matonis revealed in a blog post on May 2, 2016 that he also witnessed the use of message signatures and verifications from the first and ninth private keys. Encryption enthusiasts further pointed out that the tokens in the 1-70 block have never been moved. The story of a confidential trust sounds very far-fetched.

As the lawsuit continues in Florida, many onlookers still believe that certain details are true or fabricated, and will rely on more information to uncover some of the mysteries behind the case.