On March 28th, The Economist published an article entitled " Flaws in Bitcoin make a lasting revival unlikely" (the flaw in Bitcoin makes it unlikely to usher in a lasting recovery). The anonymous author of the article is based on the three main problems facing the current cryptocurrency such as Bitcoin. Let's first take a look at the main content of the article: The recent cryptocurrency boom and bust are reminiscent of past financial fanaticism. 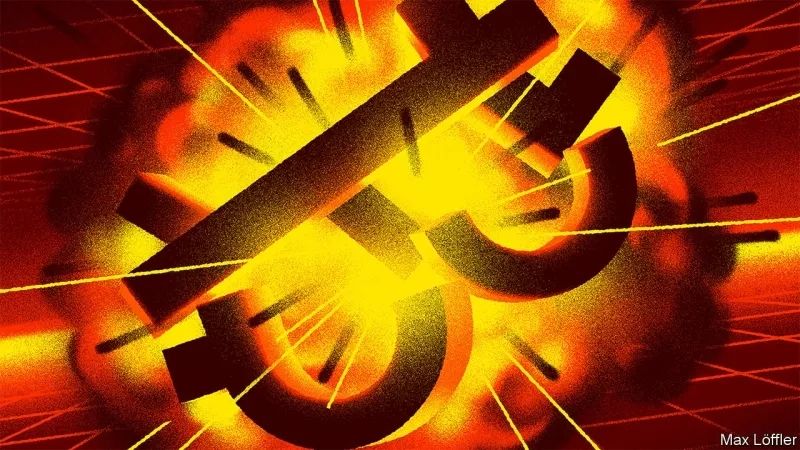 In July 2018, an advertisement for the purchase of Bitcoin by the cryptocurrency exchange CoinCorner appeared on the London Underground. The poster said “BE MORE BRENDA; Brenda bought bitcoin in under 10 minutes (Brenda bought it in 10 minutes) Bitcoin). The protagonist in the poster is a retired grandmother, Brenda, who is dressed in a rich and happy way. She bought Bitcoin in ten minutes. At the time of this ad launch, the price of Bitcoin had fallen to $7,000, and the price of bitcoin six months ago was close to $20,000. But the current bitcoin price is around $4,000. 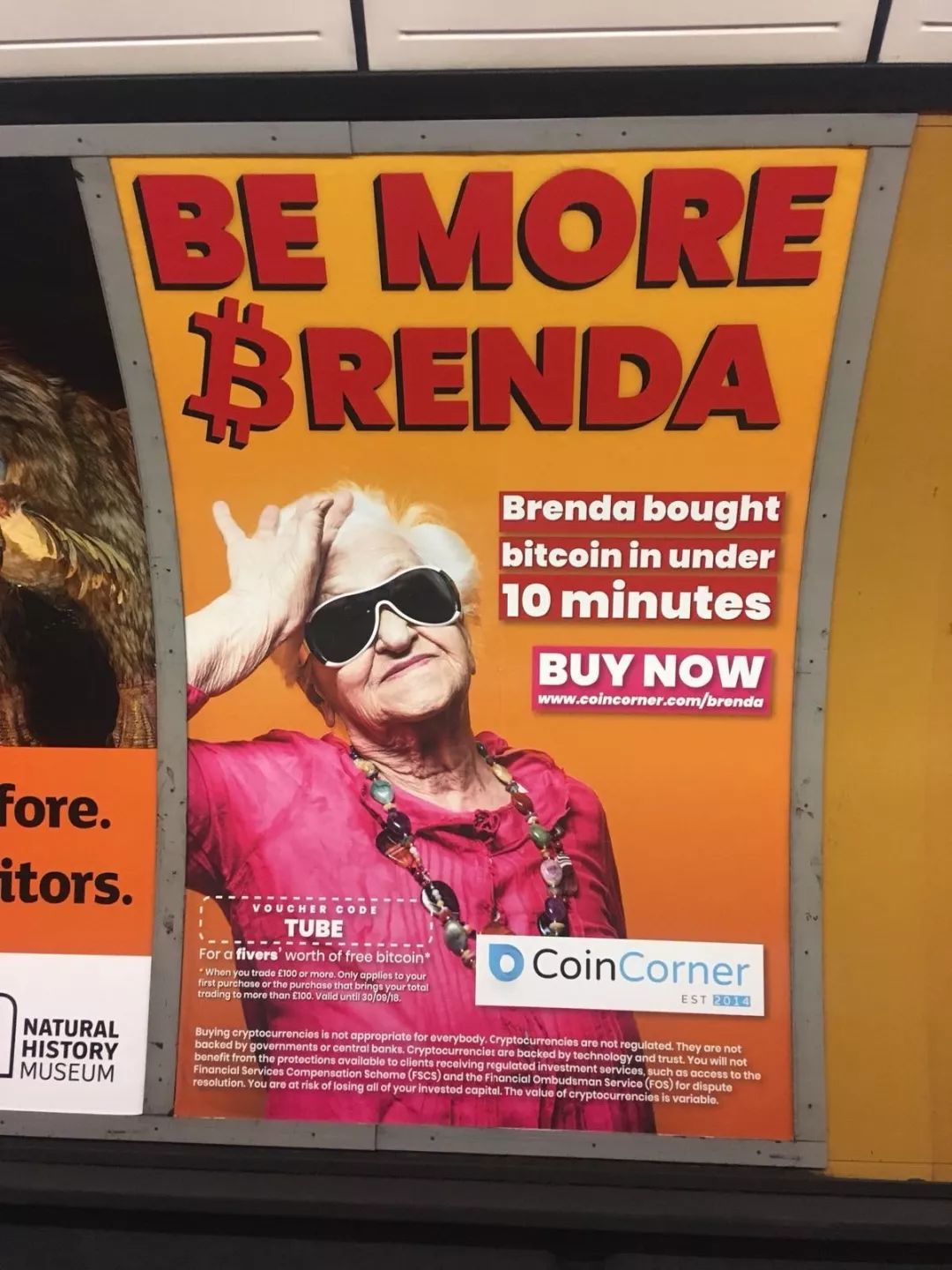 CoinCorner's advertisement on the London Underground
In the past, when bitcoin prices soared, large financial institutions such as Barclays and Goldman Sachs had considered opening cryptocurrency trading desks; brokers were also excited to send e-mails to customers; The Chicago Board Options Exchange (CBOE), one of the derivatives exchanges, also launched a bitcoin futures contract. Hundreds of cottage cryptocurrencies have also grown substantially, and some of them have far more performance than Bitcoin itself, such as Ripple's 36,000% increase in 2017. Correspondingly, the post-depression period is also quite cruel. Those who bought crypto assets near the high price experienced the worst asset performance in the world. Many cryptocurrency start-up companies have dismissed employees, and banks have shelved their cryptocurrency products. On March 14, 2019, the Chicago Board Options Exchange (CBOE) said it would soon stop offering bitcoin futures. Recently, Bitcoin miner Bitmain's IPO application plan has also failed due to failure. (Miners use a large number of specialized computers to maintain a chain of cryptocurrency blocks – a distributed transaction database, and in this way to mint new coins to get paid).

Bitcoin price trend chart
The speed of the bitcoin price bubble has exploded from swell to rupture, making it comparable to past financial enthusiasm, such as the Dutch tulip boom from 1636 to 1637 and the rise and fall of the South Sea Company in London in 1720. The enthusiasm of cryptocurrencies likes to compare it with the Internet bubble of the 1990s, which is a more complimenting comparison. They believe that despite the existence of a bubble, there are still some viable companies out of that period. But the fiasco of the cryptocurrency exposed three deep-seated related issues: the extent of real cryptocurrency activity was seriously exaggerated; the technology was not sufficiently scalable; fraud also occurred from time to time. First, let's talk about the exaggeration of cryptocurrency activities. Today, 10 years after the invention of cryptocurrency, the use of cryptocurrencies to pay for goods and services remains a small group of pastimes. Bitcoin is the original but cryptocurrency and is still the most popular cryptocurrency. In January, cryptocurrency company Satoshi Capital Research announced that bitcoin transactions totaled $3.3 trillion in 2018, more than six times the PayPal transaction volume. However, Kim Grauer, senior economist at bitcoin blockchain analysis firm Chainalysis, said the data contained a lot of double-counting, mainly related to the way Bitcoin handles redemption.

Grauer estimates that only a small percentage of Bitcoin is used for shopping. About $2.4 billion of Bitcoin has flowed to commercial service providers that provide payment services to businesses. Compared to the two payment applications in China, Alipay and WeChat Pay, the transaction volume reached $15 trillion in 2017. This figure is negligible. of. The "dark net" market, which sells stolen credit card information, entertainment drugs, cheap drugs, etc., has a bitcoin transaction volume of $605 million and a gaming site size of $857 million. Most of the rest of the transaction volume is related to bitcoin speculation.

Even for bitcoin speculators, the field doesn't look so prosperous. "Wash trading" is a ubiquitous form of trading in which traders buy and sell (or buy or sell themselves) to create the illusion of trading volume. On March 20, 2019, bitcoin fund management company Bitwise Asset Management analyzed 81 cryptocurrency exchanges in a report submitted to the US financial regulator SEC (Securities and Exchange Commission). The company estimates that 95% of Bitcoin trading volume may be artificial. Currently, the US Department of Justice is investigating allegations of bitcoin price manipulation.

Satoshi Nakamoto, an anonymous creator of Bitcoin, wants Bitcoin to resist the control of authoritarian governments and banks. Therefore, transaction records are not stored centrally, but are broadcast to all users. On average, a new batch of bitcoin is issued every ten minutes. This limits the Bitcoin network to only process about 7 transactions per second (compared to Visa, which can handle tens of thousands of transactions per second). In 2017, as the cryptocurrency bubble expanded, the network became blocked. In order to ensure the smooth progress of the transaction, at some point, the user has to pay $50 for each transaction to the miners.

In addition, Bitcoin is designed to create only 21 million bitcoins, which makes Bitcoin inherently deflationary. Mining is essentially a self-adjusting lottery, where participants buy lottery tickets through competition. In the heyday of the bitcoin mining industry, its power consumption was thought to be comparable to that of Ireland's annual electricity consumption (today, Bitcoin mining consumes only as much electricity as Romania).

The last issue is fraud. Encrypted currency trading is irreversible, which is a good thing for scammers. Ponzi schemes are common in this area. Cryptographic exchanges often fail or be hacked. In February of this year, the Canadian stock exchange Quadrigacx filed for bankruptcy. When the application filed that its founder, Gerard Cotton, died, the company lost $165 million in deposits because only Gerard knew the encryption key to protect Quadrigacx deposits. But on March 1, Ernst & Young, who was responsible for the bankruptcy, said the deposit addresses appeared to have been empty for at least eight months before the date of Gerard's death.

When did it rise to afford Lamborghini?

People are currently trying to solve these problems. Some Bitcoin enthusiasts are testing an extension called Lightning Network, which attempts to speed up transactions by moving many transactions from the Bitcoin blockchain to the chain. Price Stabilization of a certain asset's stable currency is considered a way to circumvent speculative risk, but promises once again does not match reality: March 14, 2019, Tether (USDT), the most popular stable currency (in circulation) USDT value reached $2 billion) Recognizing that USDT is not entirely supported by the US dollar.

Most fans just want the cryptocurrency price to start rising again. In 2017, John McAfee, a cryptocurrency enthusiast who previously made money through anti-virus software, publicly stated that if Bitcoin was worth less than $1 million in 2020, he would live on TV to eat some part of his body. On March 20, 2019, he said on Twitter that losing the gamble "is mathematically impossible." Twitter founder Jack Dorsey said last year that he believes Bitcoin will become the world's "single currency" within a decade. Currently, Facebook is working on some kind of cryptocurrency project. Some market analysts and authorities have given optimistic assurance that cryptocurrency prices will rise soon.

Nicholas Weaver, a computer scientist at the University of California at Berkeley, is skeptical that it is unlikely to rise at least in the short term. He said that the very obvious boom and bust experienced in the cryptocurrency sector, as well as the more attention of regulators, may have reduced the number of participants in this field.

The above is the main content of the article "The Defects of Bitcoin Make It Less Probable to Usher in a Lasting Recovery" published by The Economist. The anonymous author of the article points out some problems existing in the current cryptocurrency such as Bitcoin with an identity outside the field of cryptocurrency. He believes that there are three main problems in the existence of Bitcoin (the actual transaction volume is exaggerated and the technology expansion is insufficient, The problem of fraud, and thus the conclusion that Bitcoin's flaws make it unlikely to usher in a lasting recovery.

The issue of scalability has been widely discussed and criticized in the blockchain and cryptocurrency fields, and the Economist article also captures this issue. Although the article mentions the lightning network's bitcoin chain expansion technology, but it has been understated, and did not explore the progress and future potential of the technology, but quickly access the next topic – stable currency . It should be noted that although the current bitcoin network is far from being able to compete with traditional financial systems such as Visa, how many people thought that Alipay and WeChat payment could reach the current scale? As for the inherent deflation of Bitcoin, in fact, Nakamoto had already thought of this problem at the beginning of its creation, that is, each bitcoin can be divided into a minimum of 0.00000001 BTC.

Let's talk about fraud and crazy speculation. The article mentions that people tend to analogize the cryptocurrency bubble with the Internet bubble of the 1990s, but the authors of the article consider this a "complimentary" comparison. We know that Internet technology in the 1990s triggered a stock market bubble. At that time, any ".com" company was able to attract a lot of investment, which is very similar to the previous 1CO bubble. Fraud and crazy speculation are accompanied by emerging The phenomenon brought about by the emergence of revolutionary technology is also an inevitable period of technological development. If the comparison between the cryptocurrency bubble and the Internet bubble is regarded as "commendation," there seems to be a suspicion of "afterwards."

What is the solution to the blockchain incremental market dilemma?