On June 11, a number of media reported in detail the "Three Measures for Accelerating the Development of Blockchain Industry" issued by Fuzhou in May. Mutual chain pulse observation, Fuzhou is the seventh city in the special support policy for blockchains issued in China. Before Fuzhou, there were 6 cities including Hangzhou, Guangzhou, Guiyang, Changsha, Suzhou and Shanghai with special support policies for blockchain.

At present, the development of blockchain is still in its infancy. The introduction of such a special support policy in a city indicates an attitude: the city is supportive and friendly to the blockchain, and it is “better and effective”.

The inter-chain pulse combs the special support policies of these 7 cities, which are reflected in the multi-dimensional subsidies (site, research and development, management, talents) of enterprises; the support of the application of blockchain; the support of financial policies; and the matching of other supporting measures. aspect. By comparison, you can give some reference to the blockchain company and team to be settled, and answer the question "Where do I go?"

From time to time, in May 2017, the Financial Office of the People's Government of Xihu District of Hangzhou issued the “Policy Opinions on Building the Blockchain Industrial Park in Xixi Valley”, which became the first blockchain project in the country produced by the administrative department. Support documents. However, the drop point is only in the Xixi Valley Industrial Park, not the whole area.

After a lapse of one month, Guiyang took the lead in promulgating the “Some Policy Measures to Support the Development and Application of Blockchain (Trial)” in June 2017. The issuing unit is the General Office of the Guiyang Municipal People's Government. It is the first special blockchain policy promulgated by the provincial capital city people's government. Considering that the blockchain was still in the early stage of the last round of bubble, the popularity was not high, which shows that Guiyang has a deep understanding of blockchain technology. At the number of fairs held in Guiyang in the following sessions, the local organizers set up a blockchain sub-forum, supported by the government officials of Guiyang City.

In 2018, the blockchain support policies promulgated by the district-level people's government were in September of that year, and the Yangpu District of Shanghai promoted the development of blockchain industry in Yangpu District. The policies issued by the development zone included the Changsha in June of that year. The Policy of Changsha Economic and Technological Development Zone on Supporting the Development of Blockchain Industry (Trial) promulgated by the District Management Committee.

Until May of this year, Fuzhou issued the "Fu San", which became the special policy of the blockchain issued by the second provincial-level city people's government after Guiyang.

Comparison of the main body of the blockchain special policy 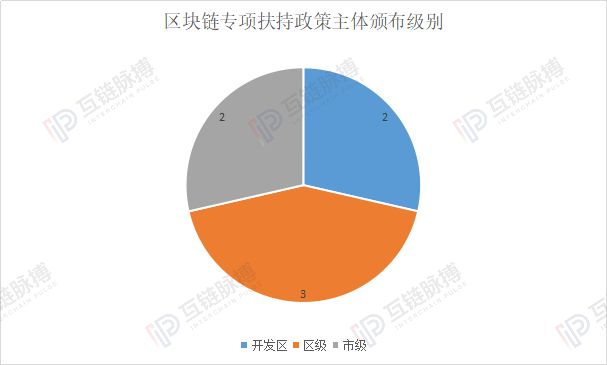 It is worth noting that the seven cities that have introduced special support policies for blockchain are all southern cities in the geographical sense, and the northern cities are collectively absent. As early as June 2017, Qingdao North District issued a blockchain planning document “Qingdao issued opinions on accelerating the development of blockchain industry”, but this document is a framework-oriented guidance plan with few specific measures. Its content is not very comparable to the documents of several other cities. In this planning document, it is proposed to study and formulate the two special documents of the “Management Measures for Block Chain Industry in Shibei District” and the “Measures for the Management of Special Funds for Block Chains in Shibei District”, but currently in the website of Qingdao North District Government Not found on it.

In addition, some blockchain enterprises or cities with more applications have no special policies, such as Beijing, Shenzhen, and Xiong'an.

The local government supports the blockchain, which is expected to bring new economic growth points to the local area, and therefore will limit the supporting enterprises or institutions. There are usually three restrictions: the scope of registration, the registered capital, and the number of years of registration in the country.

The scope of registration is well understood, and no local government can subsidize any blockchain enterprise. Among the 7 cities, Fuzhou, Guangzhou, Hangzhou, Suzhou, and Changsha 5 cities explicitly require enterprises to be registered in a certain park. Guiyang and Shanghai do not explicitly designate a certain park. In the jurisdiction, the space for enterprises to choose their own office is relatively large. However, Guiyang has encouraged enterprises to enter the blockchain innovation and development base of the Greater Data Comprehensive Experimental Zone in Guizhou.

In addition, there are some special restrictions. For example, Shanghai clearly requires that it can enjoy the support policy. “The blockchain technology innovation and entrepreneurship that is recognized to be engaged in non-coin-based circles, and the development and application of blockchains in non-coin-operated circles. The scenario is implemented by the enterprise."

Comparison of the qualification conditions of blockchain enterprises

In fact, after 9.4, even if the document is not clearly decoupled from the “coin”, in practice, the government function will be alert to the “coin” company.

On the whole, Guiyang and Shanghai have fewer restrictions and are relatively friendly to small and medium-sized companies and startups. Can participate in the support policy application with a lower threshold.

Corporate subsidies: Who is the biggest party?

After satisfying the qualifications, the company is most concerned about subsidies.

The special support policies for blockchains in different regions have different subsidies for enterprises. For example, Guiyang focuses on the identification of enterprises by third parties, and Hangzhou focuses on the contribution of local fiscal and taxation. But in combination, the company's subsidies can be divided into five aspects: site, operation, R&D, talent, and technology. There are also some localities that have special provisions for subsidies to enterprises. They can pay attention to the pulse of the chain and respond to the “support policy”.

In terms of site subsidies, Fuzhou, Guangzhou, Suzhou, and Changsha have a surprisingly capped 600,000 yuan/year, usually subsidized for 3 years, and Shanghai has a maximum of 1 million/year. The earliest policy of Hangzhou capped in 500,000 yuan / year, and the largest party belongs to Guiyang, if you work in the designated blockchain development base, free! For the office buildings invested and built by the government, the two lines of revenue and expenditure shall be managed. If the leased area is less than 300 square meters, the full rent subsidy will also be granted.

Hangzhou's restrictions on operating subsidies are to achieve a financial income of 500,000 yuan. After the fall, 30% to 60% of the fiscal revenue will be returned. For the software type of blockchain industry, in most cases, achieving this condition is more demanding than earning $5 million in revenue.

Shanghai's subsidies for operations have no revenue or tax restrictions. However, in terms of operating subsidies, it only targets “aggregation carriers”, such as industrial parks. The document states: “The operation and management of the agglomeration carrier is determined to be subsidized according to its actual operating expenses, mainly for holding various activities and roadshows. , talent training, etc., the subsidy period is 3 years, the maximum annual subsidy amount does not exceed 1 million yuan." Guiyang requires some recognition, such as enterprises are innovative enterprises, according to different levels of 200,000 yuan, 400,000 yuan two subsidies.

R&D subsidies for companies are concentrated on patent applications and high-tech recognition. Shanghai and Changsha are subsidies as long as they apply for blockchain patents; Guiyang's patent subsidies have a condition: they are rated as excellent patents. Guangzhou's policy is to give subsidies of 100,000-300,000 yuan to blockchain companies that have obtained high-tech enterprises' warehousing and certification, and Guiyang gives subsidies of 200,000 yuan to high-tech enterprises. In addition, Shanghai directly subsidizes 10% of the company's research and development costs, up to 5 million yuan, which is not available in other regions.

Among the 7 cities, the special policy of blockchain in Fuzhou and Hangzhou does not have specific financial support. The other 5 cities have it.

Guangzhou, Changsha, and Shanghai all have clear financing subsidies, which are subsidies for interest generated by bank loans. Shanghai is more diverse, in addition to bank loans, it also gives 50% interest subsidy on bond financing.

In addition, in the direct financing package, Suzhou, Guangzhou and Changsha clearly have more than 1 billion yuan of industrial funds to provide financing support.

Supporting support: the laboratory is the focus

The high-level laboratory can be the top talent in the Julong industry. When the company chooses to settle down, it can learn more about the construction of the laboratory. In addition to laboratories, some local special policies have subsidized industry organizations and incubators. For example, Changsha will give 1 million yuan, 500,000 yuan and 200,000 yuan respectively to the newly approved national, provincial and municipal level creation space (incubator) or industrial technology innovation strategic alliance or innovation and entrepreneurship base. The award, the introduction of more than 5 identified blockchain enterprises (institutions), according to each introduction of one to give 50,000 yuan reward; Guangzhou on the provincial level above identified blockchain trading center, testing center, data center, storage If the center and other public platforms obtain relevant qualifications, they will be rewarded with 1 million yuan.

In addition, Fuzhou, Guangzhou and Hangzhou also subsidized the blockchain theme conferences and activities in the park. Guangzhou has reached a maximum of 1 million yuan. Such a conference event allows companies in the park to show themselves, win more business opportunities and learn relevant knowledge.

In addition to the general subsidies, there are some unique skills in the 7-city special policy. For example, Guangzhou has set up a “cultivation reward”. For newly established certified blockchain enterprises or institutions, if the registered capital is over 2 million yuan, 10% of the registered capital will be cultivated within 3 years from the date of registration. Reward, each company or institution has a maximum reward of 1 million yuan.

The unique skills of Suzhou are the most used, and 50 application scenarios are open in the local area. Shanghai is more focused on attracting institutions to open industrial parks, which can give a reward of 5 million yuan.

In summary, the current 7-city blockchain special policy is still relatively small. For blockchain enterprises, in the early stage of industrial development, when the future is not clear, expert technical support, business model guidance, and scenario practice may be more practical than revenue and patent subsidies.

It is expected that there will be special policy support for the blockchain in the city, and the chain pulse will continue to pay attention.

Paper invoices that are disappearing: from 10,000 to 20, blockchain technology blesses electronic invoice reform