This article is an excerpt from the report "DApp "AARRR": ETH/EOS/TRON three public chain DApp user portrait study" (below).

The main problem facing the development of DApp today is not unmanned development, but how to operate to make DApp “live” for a long time and “live” better.

1. EOS's gaming class DApp has a total monthly revenue of 269 million US dollars, and 42.85% of monthly gaming users can make a profit. TRON last month averaged 25.94% of gaming users to make a profit, with the lowest proportion of profitable users.

3. The class of DApp with the highest average net user value of financial and financial categories on ETH reaches 709.3 US dollars per person per day.

Gaming class is the most profitable

The actual meaning of "conversion" is how many users of DApp operators or communities have converted and how much money they have earned. The deeper point behind this is whether DApp has a profit model. 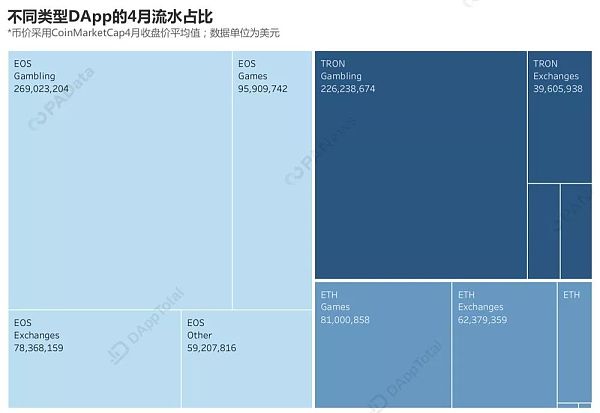 If you look at the micro level inside the different types of DApps in different public chains, you can see that the profitability of each DApp within each DApp also shows a significant differentiation phenomenon. The DApps with the heads with strong revenues “beautify” the entire category. The revenue performance of DApp's overall revenue is largely debatable.

For example, the most profitable gambling DApp on EOS, the internal DApp profitability differentiation is obvious. The average daily average of a single DApp is more than 350,000 US dollars, and the median value is only 90,000 US dollars. It can be seen only in the gaming DApp. Individual DApps have superior profitability, and most other gaming DApps have more profitability. Similarly, the game class DApp on ETH also showed a similar situation. 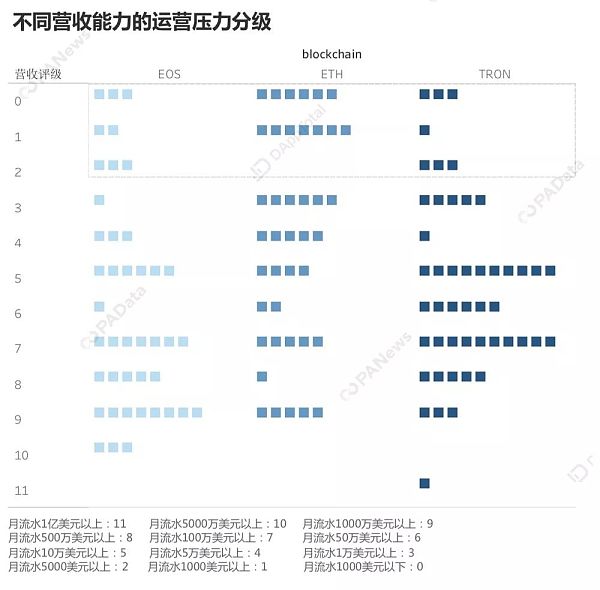 “Local Casino Players” means users who have bet more than $1 million per month in the Gaming DApp. The EOS gambling DApp has the largest number of “local players”. The highest proportion in the first four months of this year reached 0.21%, with an average of 0.120%, which is equivalent to one of the average 833 users “local tyrants” . However, these "local players" on EOS have a tendency to lose, and the proportion of "local players" has a downward trend. 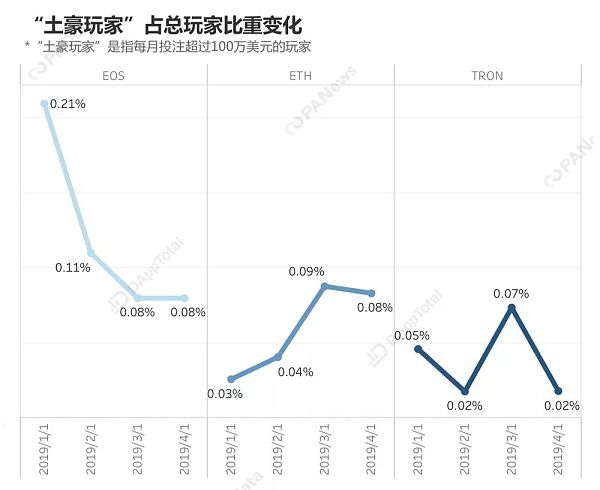 Taking the first four months of this year as the observation window, we can see that the average 42.85% of the gambling DApps on EOS can be profitable. It is the most balanced relationship between the “banker-player” relationship in the three popular gambling DApps. The proportion of profitable users of GT on the gambling DApp has jumped from about 30% in the previous two months to about 63% in the past two months. Although there are more players making money, the relationship between “banker-player” is always at Unbalanced state. The proportion of profitable users of TRON's gaming-based DApp continued to fall, from 32.04% in January to 7.11% in April, with an average monthly decline of 25.94%. The relationship between “banker-player” is not always in an unbalanced state, and it is accelerating imbalance. status. This means that the possibility that the gaming DApp on TRON may face bankruptcy due to the lack of continuous inflows is increasing. 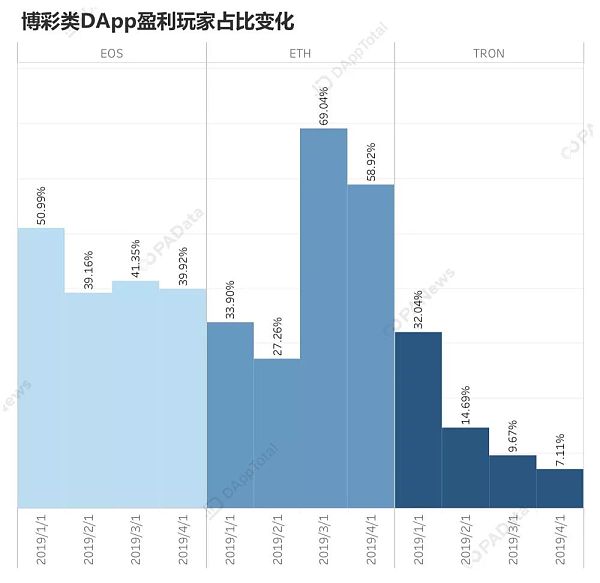 The exchange has the highest average user net worth

Although there are “local players” in the gambling DApp, the net value of the gambling DApp (user's single transaction amount) is not high. The average user net worth for EOS betting is only $89.7, TRON is only $31.5, and ETH is as low as $13.5.

It is worth noting that on the EOS and TRON, the exchanges are the average (median) average daily average customer price unit of the same type of DApp, reaching a per capita daily transaction amount of 934.8 US dollars and 83.8 US dollars. And from the revenue rating, no exchange is in the operating pressure zone of 0-2.

In addition, the net value of users of the gambling, games and high-risk DApps, which are dominant in the three public chains, are not high. If these three types of DApps want to get more users to maintain or improve their operational status, they will face more intense competition in the new and activated links. 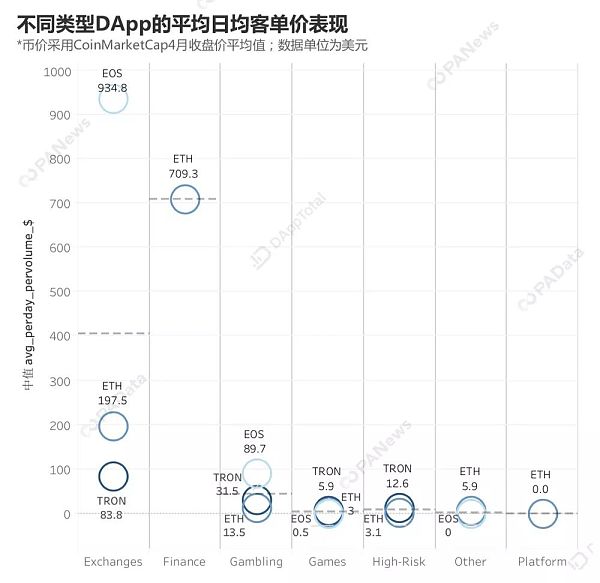 On the other hand, user net worth can also be used as a red line to measure DApp's operating costs. If the average customer cost is higher than the average user net worth, DApp's capital chain will face greater pressure. From this perspective, financial and financial exchanges and exchanges are the two types of DApps that can best withstand the pressure of operating costs, or can be understood as the two most powerful types of DApps that are “burning money”.

Social network efficiency has not yet formed

From the available public information, some DApps use the “referral” marketing approach. For example, some exchanges or games have been invited to reward bonus activities in the early days. Old users invite new users to register to receive certain token rewards.

However, the current "referral" method used by most DApps is profit-driven, and its essence is that compound interest makes both parties involved in the fission mutually beneficial. This has spawned new problems, such as increased direct costs and reduced profit margins. The bigger problem is that cashback is easy to attract some non-precise users who only come back for cash. This is also an important incentive for brushing.

Experts predict: by 2140, the Bitcoin block reward will be only 1 Cong

Reflections on the Chain Block Week of Hangzhou in 2019