Bakkt may be the biggest benefit of the year. (although everyone said so last year)

People always underestimate some short-term benefits that have not caused the impact of “huge” currency prices, such as the one I wrote earlier, “Let some Fidelity advance the field” because I didn’t see many people talking about Fidelity’s preparations during that time. The field is so important, so I think it is necessary to talk.

This time is the same, I don't seem to see how many people are talking about the big benefits of bakkt. It is estimated that they have been bothered for the past two years.

Indeed, if bakkt is the most impressive thing, it is estimated that the pigeons will be kept on, from last year's pigeons to this year.

However, there was a good news a few days ago. That is what Bakkt said before, "Try to go online in July." This time, I finally confirmed the specific date, which is July 22.

In the official statement, I gave a brief introduction on why it was July 22, because this is the 50th anniversary of Armstrong's landing on the moon, the next two days. 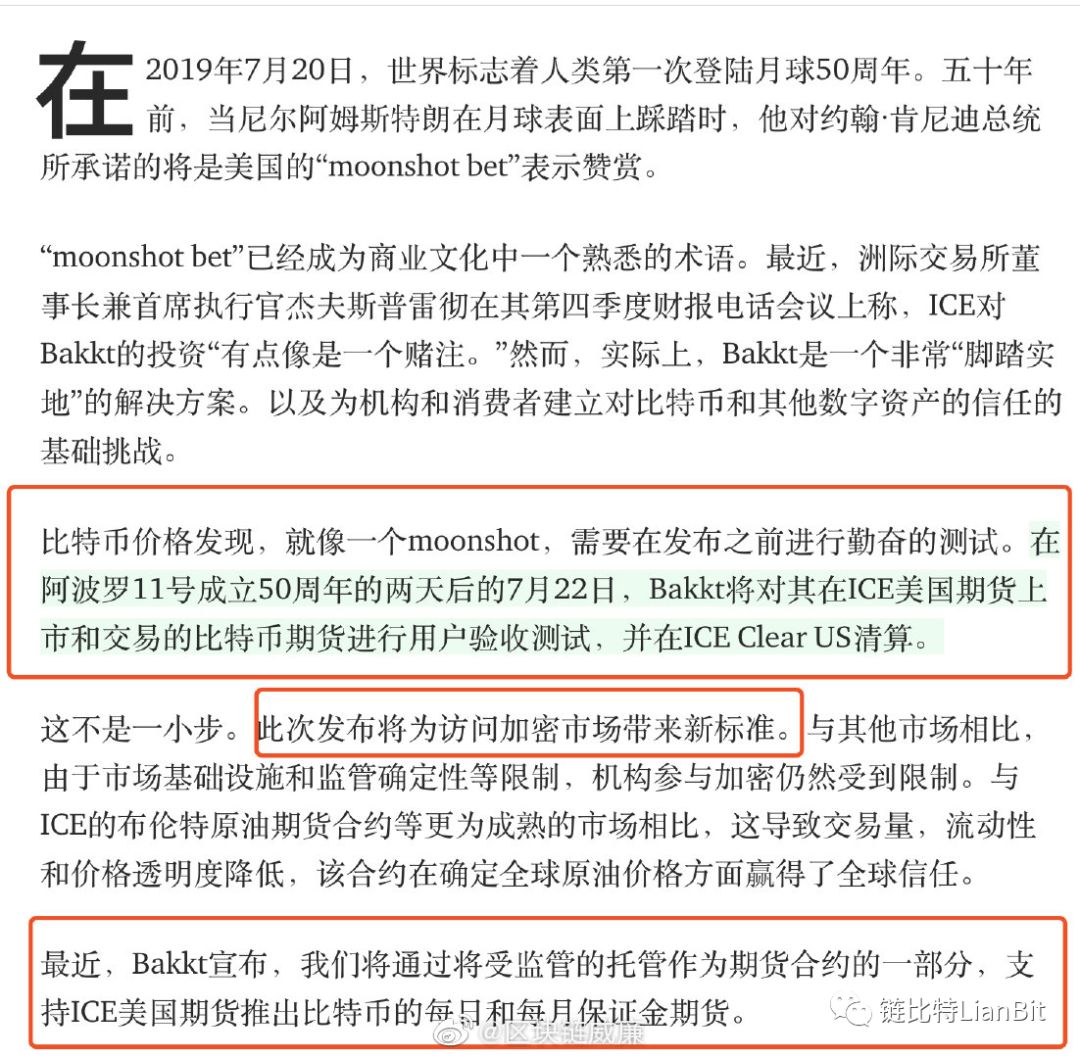 Landing on the moon coincides with Bitcoin's most classic slogan "TO DA MOON".

In addition, the announcement of Bakkt clearly found that one of the biggest problems in the current bitcoin market is that it cannot be invested without being understood by traditional financial institutions.

Bakkt can be said to be “completely” out of the currency circle, which is a major attempt by traditional financial institutions to join the bitcoin market.

In fact, Bakkt has nothing to do with the currency circle. It can be seen from one thing that Bakkt is financing in January of this year. What is the situation in January this year? Should everyone still remember it?

When a large number of companies in the currency circle were unable to survive, bakkt easily obtained nearly $200 million in financing, valued at more than a billion dollars.

Even Li Lin (the boss of the fire coin) expressed his envy in the interview. A bitcoin exchange that has not yet been online can be valued at more than one billion dollars, making the exchanges that started with "grassroots" envious.

Bakkt can get such a high valuation when the product has not come out for two reasons, one is compliance and the other is significant.

Every one of them, you will find out when you look up: "Brother, it is a bull."

Although the cryptocurrency is to subvert the financial system, it is only necessary to help the large institutions as the "investment target". Otherwise, if the most basic security of the investment is not guaranteed, the large-scale funds are very Difficult to come in.

I wrote this in the article of Liao Fuda:

“Why do we think that the “Fudas” started to enter the market, we think this is a big benefit? The reason is above, they represent a lot of investors behind them, they are waiting to see the cryptocurrency market, they are in a hurry They are FOMO, but they don't dare to enter the market, because the result of rushing into the market seems to be not very good. So they hope that the big players they have been trusting can bring them into the game, give them some assurance, let them It can also ensure the safety of funds while sharing a piece of cake.

I believe that this is not a linear growth. When some big players come in and discover that this market is really a good market, other players of the same level will also flock. ”

So why is Bakkt important? The first and most important reason is compliance, official, and strong background.

The second reason is real delivery.

Physical delivery means that regardless of the short position, when the delivery is closed, the physical BTC must be used for delivery.

So why is this important? Here are some expressions of the "white-speaking blockchain":

"Without physical delivery, Xiao Ming can go to various trading platforms to short the bitcoin. The number of short bitcoins can theoretically be unlimited. When the futures expires, the delivery will be as short as possible. The difference can be settled.

If you have to deliver in kind, the situation will be very different. In this case, Xiao Ming would not dare to short the bitcoin, and the amount of shorting would be extremely cautious.

In addition, Bakkt will provide a one-day physical settlement bitcoin futures contract. So, if you open a long position in the Bakkt trading futures contract, then you will get real bitcoin on the second day of delivery, it is still very interesting. .

This is a futures approach to real delivery, and the bitcoin leveraged futures contracts we are familiar with today are not real delivery. And because there is no need for real delivery, you don't actually need Bitcoin to participate in the contract. No big trading volume can have a positive impact on the market. It will only become a game for Lao Zhuang.

In addition to the above two, bakkt will bring a much larger significance to the larger derivatives market than the current market.

In fact, the fluctuation of bitcoin price has greatly hindered the entry of “conservative investors”. The largest funds and investors in this market are just conservative, and the investors with risk preference are a minority.

So under what circumstances will bitcoin prices start to stabilize?

The answer is when the amount of money on the spot is huge.

The derivatives market will be the most important "reservoir".

In fact, some traditional financial institutions, including bakkt, are also entering the market through the derivatives market. Because doing this is a matter of pure financial field. You don’t understand cryptography, don’t understand blockchain, don’t understand decentralization. It doesn't matter, just as you do not need to understand agriculture and planting soybean futures, the gameplay is just as good.

When a big player enters the market and the trading volume of the derivatives market is huge, how much money do you think can be pulled?

Everything is handed over to the market, and the market will naturally give you a wonderful balance.

In fact, not only do we need funds from the traditional financial industry, they also need the bitcoin market.

From the first round of Bakkt's financing, it can be seen that traditional financial institutions and big capitals need a trustworthy exchange to enter Bitcoin.

After waiting for several years, they did not dare to come in and they finally saw an official background exchange. It's no wonder that big institutions and big players are flocking to give a valuation of more than a billion dollars on a bitcoin exchange that has not yet been launched.

I can't think of it in the Internet industry. The last company that got a valuation of more than one billion US dollars even before the product was launched, and it is still the first round (can be understood as an angel round), even the A round has not yet To. In contrast, the exchange with the highest valuation of the currency is recognized as the most senior and oldest Coinbase, currently valued at $8 billion.

It can be expected that soon after the successful launch of Bakkt, a new round of financing will be ushered in, and the valuation may be close to 10 billion US dollars.

Such a terrible unicorn can not be supported by the money of the currency. It is behind the big institutions, big capital and big companies that are eyeing the big cake in the bitcoin market.

We always say that the currency circle is still too small, now big players have to come in, are we ready?

This article does not make any investment advice. Rejected without permission.

Market analysis: The resistance above BTC is large, waiting patiently for admission

Research: 64% of cryptocurrency transactions are fraudulent, but the “false rate” has been reduced by 35.7%.

What did the agreement war of 40 years ago have on the blockchain?