However, just last Friday, the price of Bitcoin was still around $8,200. How could it be less than three days, and one bitcoin rose by a maximum of $1,000.

Some time ago, the currency circle was hit by the two sides of the currency, and the skyrocketing of these days made the bitcoin holders a lot of exuberance. Then, what factors in this round are driving Bitcoin to reach a new high in 2019?

Last week, the Wall Street Journal issued a document saying that Facebook's cryptocurrency will be managed by dozens of institutions, including the exchange's Coinbase, payment industry's MasterCard, Visa, Paypal, e-commerce Ebay, car platform Uber, etc. In short, Everyone is not small. The giant is really a giant, and there are a lot of consortiums behind it. Since the beginning of this year, Facebook has earned the eyes of the people of the currency. One day, on June 18th, this high-profile cryptocurrency will be officially unveiled.

As mentioned in the previous article, Facebook is a social giant, with 2 billion users all over the world. The scope and number of people can't be achieved by ten coins.

In the face of investors who are pursuing profits, Facebook's currency is a stable currency that anchors a basket of currencies. It does not have a higher investment value than other altcoins.

On June 13, Bakkt Chief Operating Officer announced in his blog: "On July 22, Bakkt will start the Bitcoin futures test." After waiting for a year on the Bitcoin Futures Exchange, there was finally a finale.

The biggest highlight of the Bakkt platform is its strong background. It was created by the New York Stock Exchange's parent company, the Intercontinental Exchange (ICE). In the bear market, it won 12 well-known companies such as Boston Consulting Group, Microsoft Venture Capital, and Victoria Harbour Investment. Investment institutions have $182 million in financing, and have reached cooperation with large companies such as Microsoft and Starbucks.

From the investment and cooperation institutions, it is not difficult to find that Bakkt has high hopes in both the circle and the circle. Once the Bakkt is officially approved by the regulatory body CFTC, it will attract more traditional financial institutions to enter, attracting numerous investors to enter the market. transaction.

Unlike CME and the upcoming CBOE futures contract, Bakkt uses bitcoin to deliver in real terms . After the contract expires, users must use Bitcoin instead of US dollars to complete the delivery. This change will directly increase the demand for Bitcoin. And liquidity, greatly reducing the speculative and manipulating space of the futures market.

US regulatory tightening: the impact of the altcoin

On Friday, the company announced that it will stop providing services to US users from September 12. More than 20% of the currency 's traffic comes from the United States, and at least 30 million US users are affected by this news. BNB fell 10% within 24 hours.

Although the subsequent announcement of the currency is not a complete exit from the US market, it will launch BinanceUS, a trading platform designed for the United States in the future, but it still cannot stop users from being angry at the withdrawal of the currency, and the liquidity of some altcoins is also affected. influences.

There are user statistics, cryptocurrencies such as AE, HOT, LINK, NANO, ONE, VET and WTC are still unable to provide trading channels for US users , and some altcoins ARK, BTT, IOTA, PIVX and ZIL, etc., will only be available in one Compliance with US exchange trading. 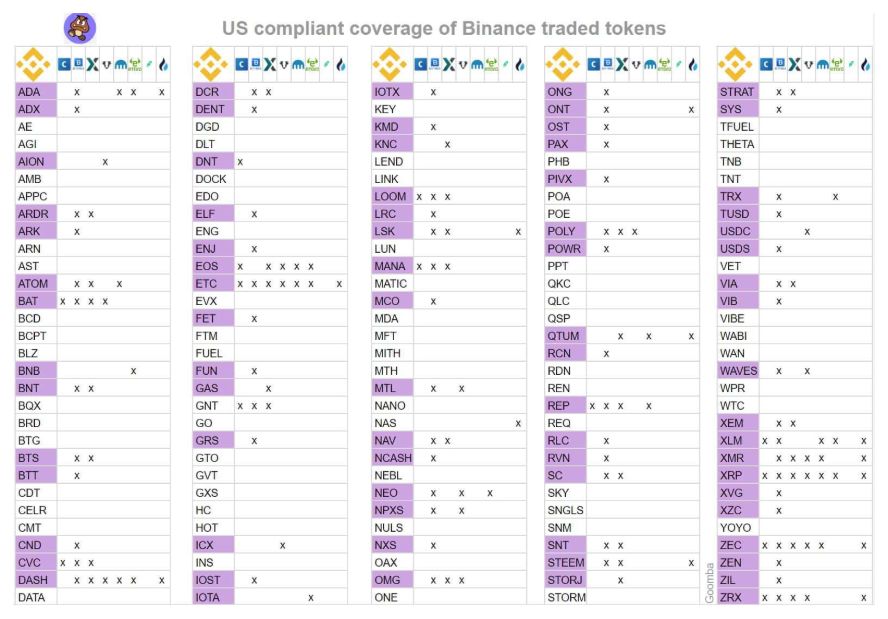 If not, no one will give up the big cake of the United States. But survival is more important than the benefits.

In addition to the currency security, the recent regulatory diversion is also the exchange Bitterx – from June 28th, Bittrex began to shield 42 altcoins from US users, including some common mainstream altcoins.

It is a fact that the regulation of the US currency circle is tightening. The exchange can choose to flee or choose to go down the shelf, while the altcoin currency becomes the biggest “victim” of this round of supervision . On the one hand, the liquidity is reduced due to exchange changes, and On the one hand, there is also the risk of being classified as a securities token.

But for investors, no one will hope that there is no place for trading in the hands of the Shangzhai. At this time, Bitcoin will assume the role of hedging, and the demand for Bitcoin will increase in the short term, and the price will also be generated. Phased impact.

The giants entered the market and the regulation was clear… Of course, the reason for the real rise of Bitcoin is a matter of opinion. Although the market is unpredictable, we are very happy to see the currency circle being "bombed" by more and more favorable.

The same is a breakthrough of 9,000 US dollars. In 2017, the bitcoin took only 22 days, and it rushed to the high of 20,000 US dollars. We can't know the degree of surprise that this round of bull market will bring, but we can be sure that encryption Money has taken another big step toward top capital and mainstream people.