Facebook brings a bull market? Pour cold water for you

These days, about the issue of Facebook currency, the circle is a bit too much.

Especially yesterday, Libra's white paper was released, and the social media was full of the atmosphere of "the fate of the currency circle changed." It seems that from today, the currency circle has stood up, and once it has become a master, "you can't afford it today." Up…

Of course, I don't deny that the significance of Facebook's participation in cryptocurrencies is indeed very significant. This may be the same historical status as Steve Jobs's iPhone release in 2007.

but! (Cold water is coming)

We must admit this: Facebook's cryptocurrency is more symbolic and indirect to the current currency, and it doesn't have much direct meaning.

To put it bluntly: Facebook's issue of currency has no effect on the price of the currency in your hand. Moreover, you are basically hard to get any benefit from it.

This basin of cold water hopes to calm you down in the overwhelming cheers of "The trough cow X changes the world!"

Ok, then I’ll talk about how I think about Facebook. 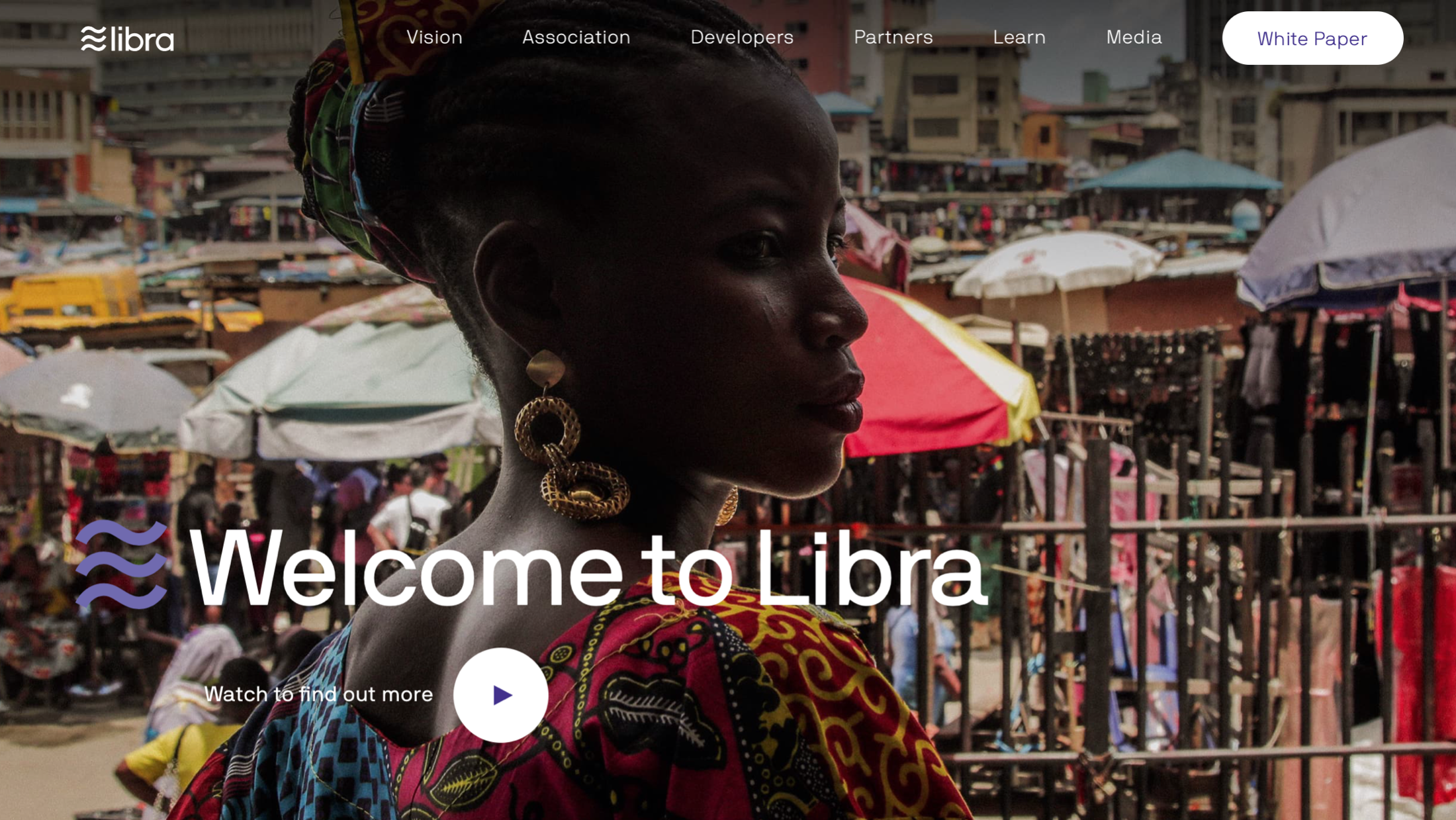 First of all, the most heavyweight players in the currency circle are coming into the game. 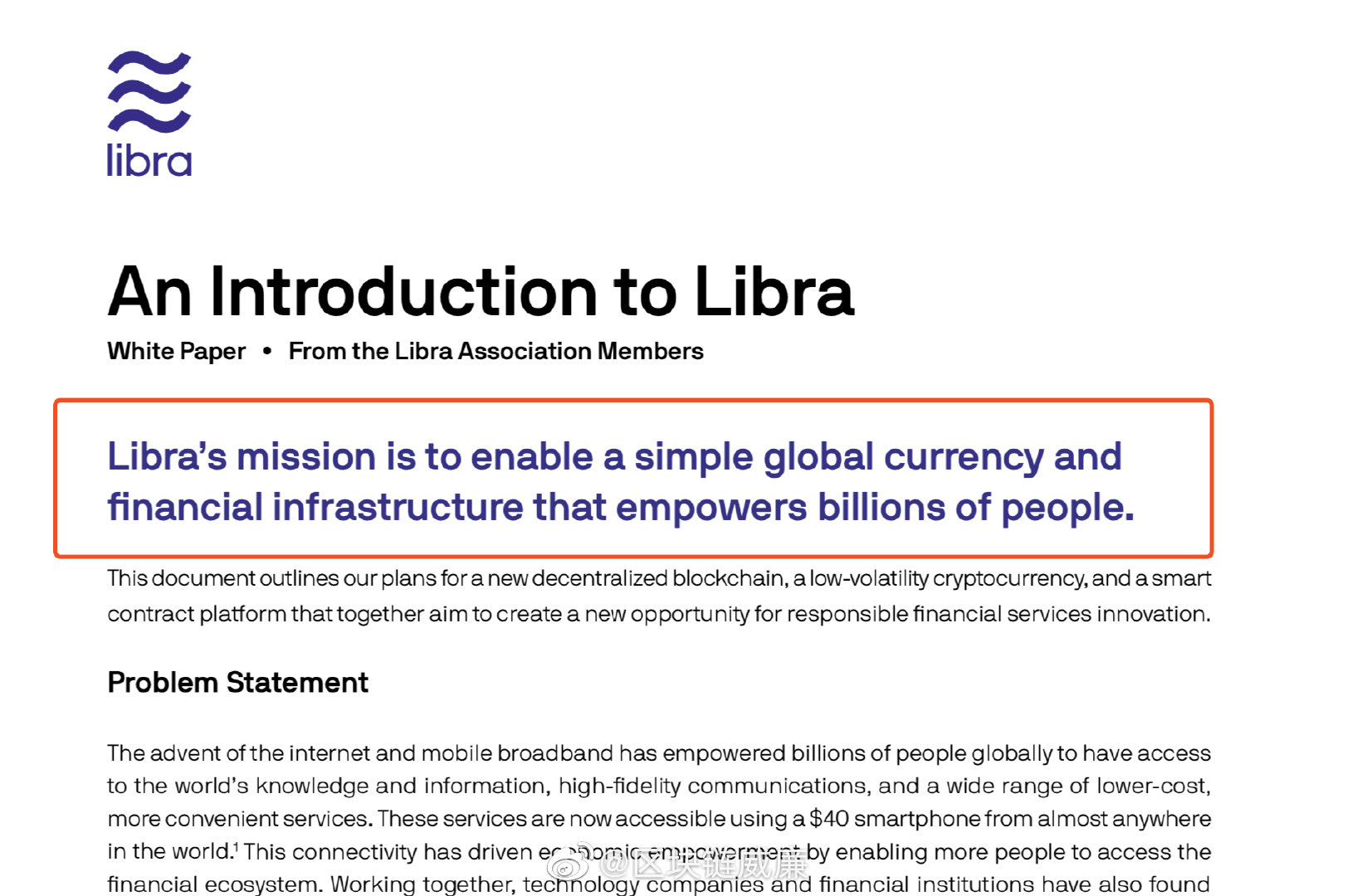 Libra's mission is to enable a simple global currency and financial infrastructure that is millions of people.

I won’t blow these cows. If you are happy to read these, you can go and see the white paper.

In addition, Facebook's currency must be centralized, and this is no doubt. However, they open source software and are also geek spirit.

So how does Facebook guarantee the value of Libra is stable?

Instead of using a single currency, Libra does not use gold as a support, but instead uses a range of low-volatility assets (such as cash and government securities provided by a stable and reputable central bank).

In addition, Libra will release a security token called Libra Investment Token as a way to fund incentive programs and pay for operating costs. They are used only by authorized investors as securities. The holder can obtain a potential profit from the reserve interest.

In fact, the signs of traditional institutions holding a group of coins can not converge at all: We also saw Libra's partner list, which is really strong. From these lists, we can make such a guess:

But after pooling these possibilities, Facebook may not be able to escape the status of the dollar. When Facebook users around the world build trust in Libra, I believe that Facebook will give you legal currency at the same time as the bank. At that time, people no longer need to convert Libra into French currency, and there is no longer a third-party asset support scenario. All passes are Libra. Facebook can take on the acceptance of Libra-priced services, finance, assets and more.

Let's just say, if Tencent and Ali jointly launch a coin, such as TBB, then your WeChat payment and Alipay payment are actually through this TBB, not RMB, but he guarantees that this is a stable currency based on rmb. Will you safely put the money in Alipay or WeChat? I believe that you will still.

If it is under the premise of WeChat payment and Alipay, plus globally universal and not subject to the amount limit, or even anonymous (of course, "pseudo-anonymous"), is it particularly powerful, hit the world?

But regarding Libra's currency attributes, I think the "Analysis of the currency value of Facebook's digital currency Libra" is quite good. The following is an excerpt:

“(Libra) once again proves that it is only a legal currency vassal. Now go back and read “It can combine the characteristics of the best currency in the world: stability, low inflation, universal acceptance and interchangeability. "Is it ironic? These advantages are not given by themselves, but by the policy of the central bank represented by the basket, which is the modern central bank's inflation targeting system, financial stability targets, the dollar's offshore market and Tens of thousands of banks and Broker-Dealer in the global financial system are not given by your white paper…

The author of the white paper is mistaken. The currency board system is linked to a single currency. Libra is more like SDR, and it is similar to the euro zone in the parallel currency hypothesis (that is, the hypothetical situation in which the euro and the Italian lira, franc, and Deutsche Mark are simultaneously circulating). In short, they are all monetary systems that cannot be equal to the dollar system. ”

However, regardless of whether the gadget is good or not, it has nothing to do with ordinary people, because if you want to participate, you need to meet these conditions: 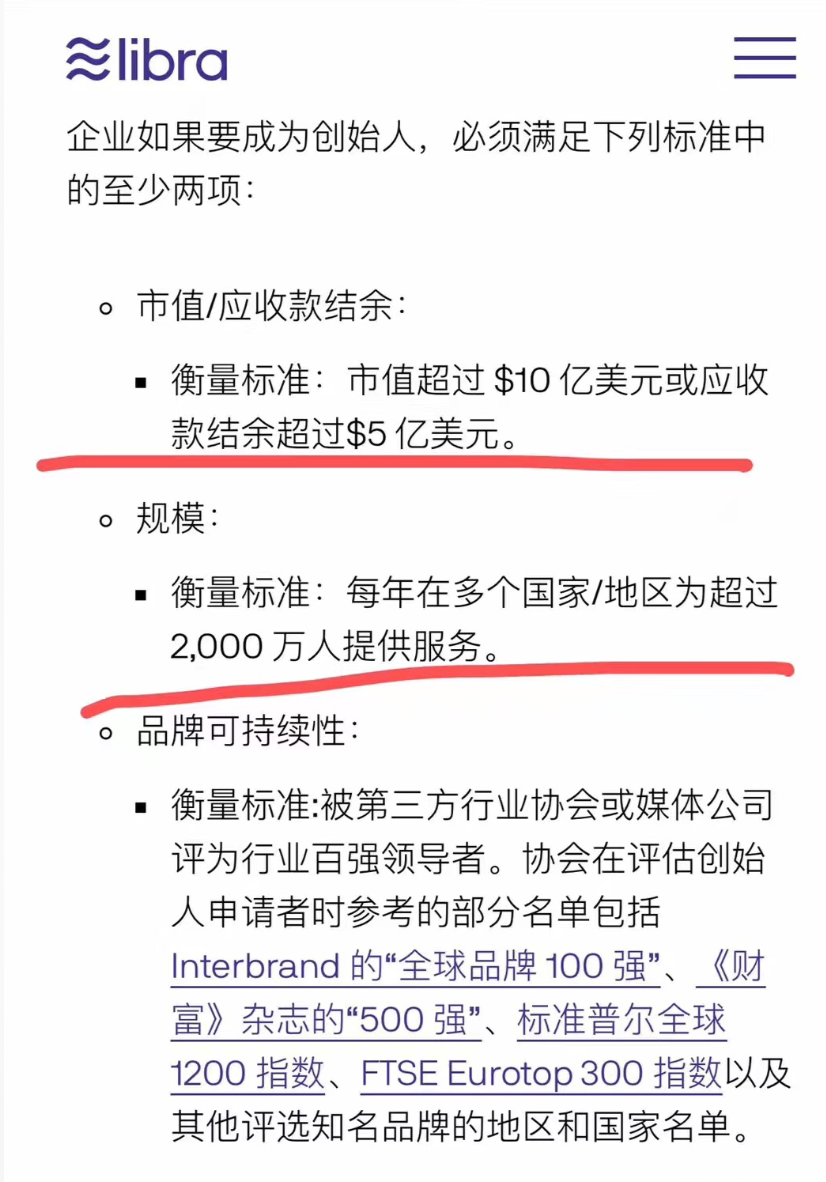 In short, it has nothing to do with ordinary players.

So this is why I said that Facebook currency is actually a symbolic meaning that is far greater than the actual meaning for the current currency holders, because this is actually nothing to do with you.

Finally, if you are too lazy to read the long-form articles and don't want to read the white papers, you can take a look at the following summaries. I know what you care about.

2. The currency is issued by the subsidiary Calibra, and the wallet is also.

4, will come online to an independent app, running independently of Facebook.

5. It has value in use and no speculative value.

6, the use of KYC is required.

7. Libra is a stable currency that anchors the dollar.

The biggest impact on Bitcoin: Anyone who has been exposed to cryptocurrencies (digital currency) will find Bitcoin better in the end. And Facebook can offer such opportunities to billions of people. In fact, if Facebook is a good start, Internet companies are coming one after another. After all, since ancient times, the collection of the "coin tax" has been a dream of the whole world.

All stable coins, whether it is Facebook or JP Morgan Chase, USDT, USDK, PAX, DAI, etc. are all good, the basis is the US dollar, the stability of the US dollar is an absolute premise.

The opponent of Bitcoin is actually the US dollar.

In the end, everything that happened in 2019 was just to illustrate one thing: there was not much time left for retail investors.

This article does not make any investment advice.