In 2019, Facebook began to distribute cryptocurrency, and a cryptocurrency called Libra is about to be released. And today (June 18, 2019), a white paper on the Libra project will be released soon.

Facebook's issue of coinage caused a lot of sensation in the currency circle.

Although Libra's white paper has not yet been published, Libra will be a stable currency project based on reports from several US media, such as The Wall Street Journal and Financial Land.

In terms of price, Libra will be a basket of currencies anchoring multiple national laws. [ Source ]

On the technical side, Libra will launch its own blockchain, which is about to be tested and open sourced. [ Source ]

In terms of application scenarios, Libra will be used in the payment field.

The meaning of stable currency

Second, outside the currency circle, using cryptocurrencies that anchor the legal currency for payment, blockchain technology can make it more convenient than banknotes and safer than other forms of electronic money.

Third, the stable currency is a blockchain-based currency that enables cross-border payment settlement and breaks down country barriers between legal currencies.

As a publisher of stable coins, Facebook can make a profit by issuing Libra.

On the one hand, users need to use legal currency to purchase Libra, or understand that mortgage money is borrowed from Libra. These two forms of capital flow are the same. If you understand that you are using Lifa to buy Libra, you can only get less legal currency when you sell Libra. If you understand it as a mortgage, lend Libra. Then, when you are still learning Libra, you will deduct a certain fee. Facebook can earn the difference from this process, which is the most basic profit model of stable currency.

On the other hand, if the user buys or borrows, they need to pay the French currency to Facebook, and Facebook may use some of the funds for reinvestment and profit. Of course, this profit method is optional. Facebook does not have to use this method. Users don't welcome this profit.

In any case, Libra's stable currency positioning is in demand, and Facebook is also profitable.

This positioning is no problem.

The question is whether the function of stabilizing the currency can be properly undertaken by Facebook. So, from the perspective of competition, use the SWOT model to analyze the issue of Facebook's issue of stable coins.

Although there are many similar products on the market, such as the stable currency USDT and PAX issued by the centralization, the use of smart contracts to maintain stable DAI, etc., these stable coins are only anchored a kind of legal currency.

And we know that there is a risk of currency fluctuations in any country's currency. For example, we saw the price increase of BTC/USDT in 2019. In addition to market expectations, the depreciation of the US dollar is also an influencing factor.

And Facebook's stable currency is a basket of currencies anchored by many countries, which can reduce international risks.

Not to mention that Facebook is a social media in the Internet industry. It has certain cooperative relationships with other media and entities. Therefore, when promoting the use of stable currency, it will have an advantage over other stable currencies.

TVB analyzes a question about Facebook on the Internet. This question is that the users of facebook are aging: 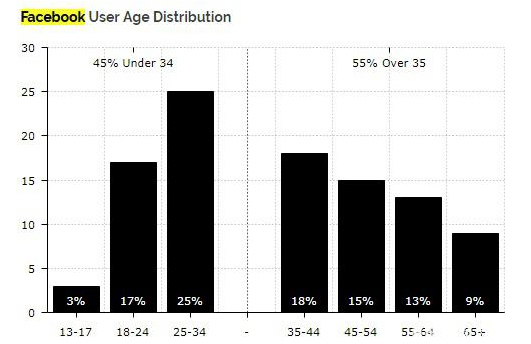 TVB does not agree with the idea that Facebook users are ageing. Take a look at the screenshot below: Let's take a look at this screenshot from the 2010 China Census Report:

Seeing it, it’s not that the Facebook user is aging, it’s the aging of the world’s population. Facebook's user distribution is no problem, user size is still the core advantage of facebook.

Since the white paper has not yet been released, we are not aware of whether the project is a public or private chain. However, as a centralized organization, even if it is a public chain, Facebook is prone to centralization during governance.

The USDT and PAX have the same principle and are not audited, but the USDT is still more popular. This is because the USDT went online early and seized the opportunity.

XRP is also a project that works closely with traditional finance, but XRP is online earlier.

3. Inexperience in the financial sector

Facebook's stable currency is used in the payment field. This project is more about the blockchain and Internet sectors, but the financial sector. If you control the circulation and liquidity, how to deal with the user's purchase of libra or mortgage funds when borrowing libra.

Issuing currency, this should be the central bank, at least the bank's business. Facebook is obviously inexperienced in finance.

Digitalization and informatization are the general trend, and the same is true for the digitization of money. However, digital currencies face security risks.

From the outside, Bitcoin is in the early days of the bull market, at least no longer a bear market, and the cryptocurrency has received a lot of attention. Therefore, when Facebook's stable currency is promoted, the difficulty is lower than that of the bear market.

The stable currency of Facebook is different from the application scenario of USDT, but it has certain competition with XRP. XRP is also a cryptocurrency issued as a centralized organization, dedicated to payment settlement using XRP. XRP has been landing early, and it has close cooperation with financial institutions. Although it is slightly different from Libra's application field, there is still a certain competitive relationship.

In addition, pressure from regulation may also limit the development of Facebook's stable currency. You know, if facebook is like the USDT, it is not fully mortgaged, it has the function of creating money. This poses a threat to both traditional finance and government.

TVB believes that there will be a cryptocurrency Facebook's stable currency that can be supported and widely used by society. TVB feels that at present, cryptocurrency is still facing difficulties in the wider payment field, and Facebook has also faced great challenges as a non-financial institution has entered the financial sector.

Second, it is simply the security of the blockchain. At this stage, it is not enough to convince users to use libra.

The significance of Libra's stable currency is that it can be paid at low cost and high efficiency, without bank remittance. However, if it is a private chain, it loses the decentralized nature of the cryptocurrency, which is easily regulated by the government and difficult to circulate.

However, if libra's blockchain is a public chain, who will contact the user to use libra? It is more difficult to guarantee Facebook's control and bonus in the public chain.

In any case, a stable currency that is not subject to national or geographical restrictions but has a legal currency anchored is what we need. Therefore, we cannot arbitrarily deny the stable currency issued by facebook. Facebook still has certain advantages. Whether its stable currency can develop, we can only say that things are artificial, we have to wait and see.