Why are people not ready to accept Bitcoin?

Simply asking "why", there may be many similar answers – scalability, transaction fees, security, usability, etc. With the development of blockchain technology, these problems can be solved sooner or later. But if you go deeper and explore the answer, you will find that technical problems are not a problem at all compared with "society."

Like all new things, Bitcoin faces many social and philosophical problems: code trust, identity, no leadership, and no single point of failure. As a truly non-leader, decentralized and open source cryptocurrency, Bitcoin based on the concept of decentralization is unusual for the traditional financial circle.

In modern society, people live in a centralized world based on trust and accusation. We believe that the funds will be deposited in the bank. We use the currency of the state monopoly. When we encounter harm, we appeal to the court or other arbitration institution. We don't have to know everything, because the perfect social infrastructure prepares us for everything we can rely on. We are getting used to this model and are used to pushing away responsibility.

Of course, this is not to evaluate the quality of this system, but to say the reality we are facing. This is why utopian-like decentralized bitcoin can make the world so shocking. Bitcoin cannot exist in a society that is full of concentrated thinking and strong trust needs.

As history shows, most people accept established rules of the game, and only a few provide improvements or create new things that are more advanced and give new impetus to social development. So reciprocating.

In March 1973, the Bretton Woods system almost collapsed. After the international community reached a "Jamaica Agreement" with the legalization of floating exchange rates and the non-monetization of gold in 1976, the long-running Bretton Woods system was completely wiped out, and human society officially entered the legal currency era. People are used to this monetary system, and many people know very little about their alternatives.

Most modern economists follow existing economic theories either because they lack incentives for the development of new ideas or because the central bank does not tolerate dissent. When the problem arises, political economists usually propose subtle "improvements". For example, after the 2007-2008 financial crisis, quantitative easing increased the country’s debt burden.

Ordinary people are increasingly focusing on consumerism, and for them, currency ease of use is more important. Cash, bank card, Alipay, Paypal or other service platform, which one is the most convenient to use. Many people don't care about the support behind the money, because they can exchange money for valuables at any time. As a result, the illusion of confidence in the current monetary system is formed.

People's perceptions are distorted, making it difficult to recognize that the entire monetary system relies only on trust and belief (debt) for the future. Therefore, it is funny to hear that "Bitcoin has no support". We subconsciously believe that the fiat currency is fixed and will transfer the right to manage funds to the central bank. This is actually similar to human acceptance of the monarchy under the autocratic system.

When it comes to money, people always have only 7 seconds of memory.

People have multiple expenses a day, and few people monitor their daily expenses. For moderate inflation, it is only noticeable when the price of the desired commodity is “suddenly” elevated. We even forgot the existence of the Italian lira, the German mark, and the Spanish peseta. After all, they were replaced by the euro. Although it was only 20 years, I am afraid that the euro will exist from beginning to end.

Even a crisis situation will quickly become the echo of the past. In the 1990s, the pound, the Russian ruble, the Italian lira and many other currencies were in a difficult situation. The Turkish lira has fallen 40-80% for 22 consecutive years; Argentina has experienced four debt defaults in the past 40 years; after the 2007-2008 financial crisis, most Eastern European countries have depreciated by 150%.

Speaking of it recently, I have to talk about the story of India. In 2016, Indian Prime Minister Narendra Modi announced the cancellation of the current circulation of banknotes with a denomination of 500 and 1000 rupees, which accounted for 86% of the currency in circulation in India.

The government claimed that the “waste order” would be a major blow to corruption, counterfeit money and tax evasion, as only about 2% of citizens were taxed according to law. However, due to this policy, Indian citizens are eager to exchange suddenly ineffective currencies, and the banks are lined up in large numbers so that the society is in chaos, and the public complains. At that time, 98% of the payment was paid in cash, so street vendors could not sell the goods normally. The rich continue to evade taxes and start buying diamonds to save money.

In less than a year, the decree was considered a failure and 99% of the banned banknotes were recirculated.

Despite countless historical cases, many still support fiat money and ignore the risks of currency depreciation and political decision-making. Even today, the crisis in Venezuela will soon be forgotten, and Zimbabwe’s 100 trillion huge banknotes will become jokes and eventually drown in the long river of history.

People will hardly draw conclusions from historical crises and will continue to live by inertia. Has the Indian people changed their confidence in the government after the incident? almost none. India is still the country that trusts the government the most. 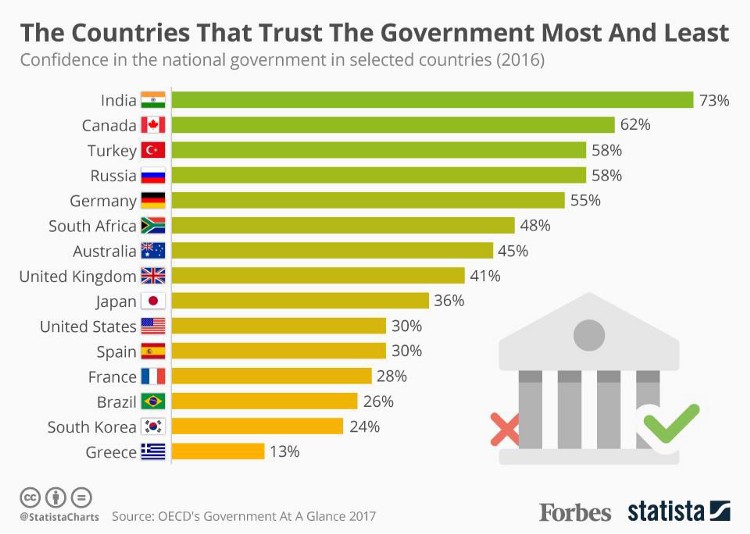 In his article on cryptocurrency, Daniel Jeffries describes why attitudes toward centralized institutions and currencies depend on cognition.

"Imagine that you are in Syria now. The central infrastructure and money in your country are destroyed. You don't want war, but you can't do anything. Now the house is destroyed, family and friends are not killed, the bank disappears in the bombing. You are homeless, penniless, and have nowhere to go. What's worse, other countries are building the wall, you have no place to live. But if your money still exists? It is stored in On the blockchain, you can extract it after downloading the recovery wallet. So, is it easier to start a new life?"

Government authorities and the rich live in a "normal" centralized world, and most things work properly. One of the main problems is the loan interest rate. In this case, the government of rich countries may think that there is no reason to support useful technology, after all, bad things will not happen in their own country. These countries are not protecting the national system from collapse, but protecting the system from inertia.

In order for people from the "normal" centralized world to focus on cryptocurrencies, they must be given a certain economic benefit or a better way of transferring money. Otherwise, this technology is almost useless to them.

But not everyone lives in a "normal" centralized world. Most First World citizens do not realize that there are still many people in the world who do not have secure banking infrastructure and trustworthy arbitration institutions and governments. These countries are generally full of fear and numbness, not trust. In turn, fear makes people live in the "law of the jungle."

This is why cryptocurrencies are supported by citizens:

Hyperinflation in Venezuela; Turkey and South Africa face a new wave of depreciation; the 2016 Indian event.

People in these countries have good reasons to use cryptocurrencies as an alternative.

For those who use real money for a long time, the appearance of banknotes may be incomprehensible: how can a piece of paper be equivalent to a silver coin? Why is this "banknote" worth 2 coins and this one worth 10 coins?

Confidence in the new currency form is gradually established until it becomes unconditional acceptance.

The ubiquitous revolutionary belief has become the beginning of the revolution

Most changes in the monetary system are accepted by the authorities, and people have been adapting to these innovations. Legal coins, gold coins, and silver coins all appear in a gradual manner and are ubiquitous according to the authorities.

For now, the idea of ​​cryptocurrency is revolutionary because change begins in society and the government is adapting to innovation. The revolutionary spirit is still inherent in the encryption community. Some crypto enthusiasts oppose state regulation, which seems reasonable because the country's monetary system has repeatedly failed.

This means that there are only two ways to use Bitcoin on a large scale today – evolution or revolution.

But no matter what, there is a bad news: we will have to "tamed" today's bitcoin, after all, there is no other way out.

Imagine if the currency is completely out of order.

The world is facing a new economic crisis that is more devastating than the Great Depression, the 1973 oil crisis and the 2007-2008 financial crisis. People are facing unemployment, banking companies have collapsed, and there is a panic around. The government and the central bank lost credibility, and in order to survive, people find alternatives to the national currency.

But the question is: What to do next?

Will people allocate funds for different needs without centralized management and mutual trust? Will it be possible to create flexible and applicable rules in a dynamically changing system through voting or competition? Will people consider the experience, knowledge, and perspective of each individual?

People can get used to everything, we should not rule out such a result, but it seems too idealistic. People tend to organize and cooperate in the context of change and crisis, but can a person who is used to centralized thinking become a decentralized thinking person in a short time?

This is unlikely. We still want to shirk our responsibilities. Therefore, we will only establish new institutions with great probability. Even if social consensus becomes the core of the world, nothing has changed.

The combination of new concepts and old thinking – Bitcoin

This crypto revolution will eventually end, and regardless of the outcome of the revolution, we will all return to conservatism.

Even if Bitcoin and other cryptocurrencies beat French currency, the existing methodology is unlikely to change much. The French Revolution was born in the First Empire of France, and the outcome of the October Revolution was the establishment of the Soviet Union. The Internet has been used to overcome centralization, but it has fallen into the core tool of monitoring.

Many of the existing cryptocurrency exchanges and wallets still distort the nature of Bitcoin, after all, Bitcoin does not require institutions. As with inertia, we need these institutions to interact with Bitcoin. If you continue to move in this direction, then the bitcoin that will be presented later may be contrary to the original intention.

Of course, humans may one day accept money based on distrust, although this may take a long time. The idea of ​​Bitcoin will not be domesticated, but there will always be compromises in its implementation. Perhaps the currently presented version of Bitcoin is very successful as a cryptocurrency, but from the perspective of distrust-based, it is likely to fail.

We are not ready to accept the real bitcoin, and maybe one day it will achieve true decentralization. But in any case, bitcoin is undoubtedly another combination of emerging concepts and old centralized thinking.