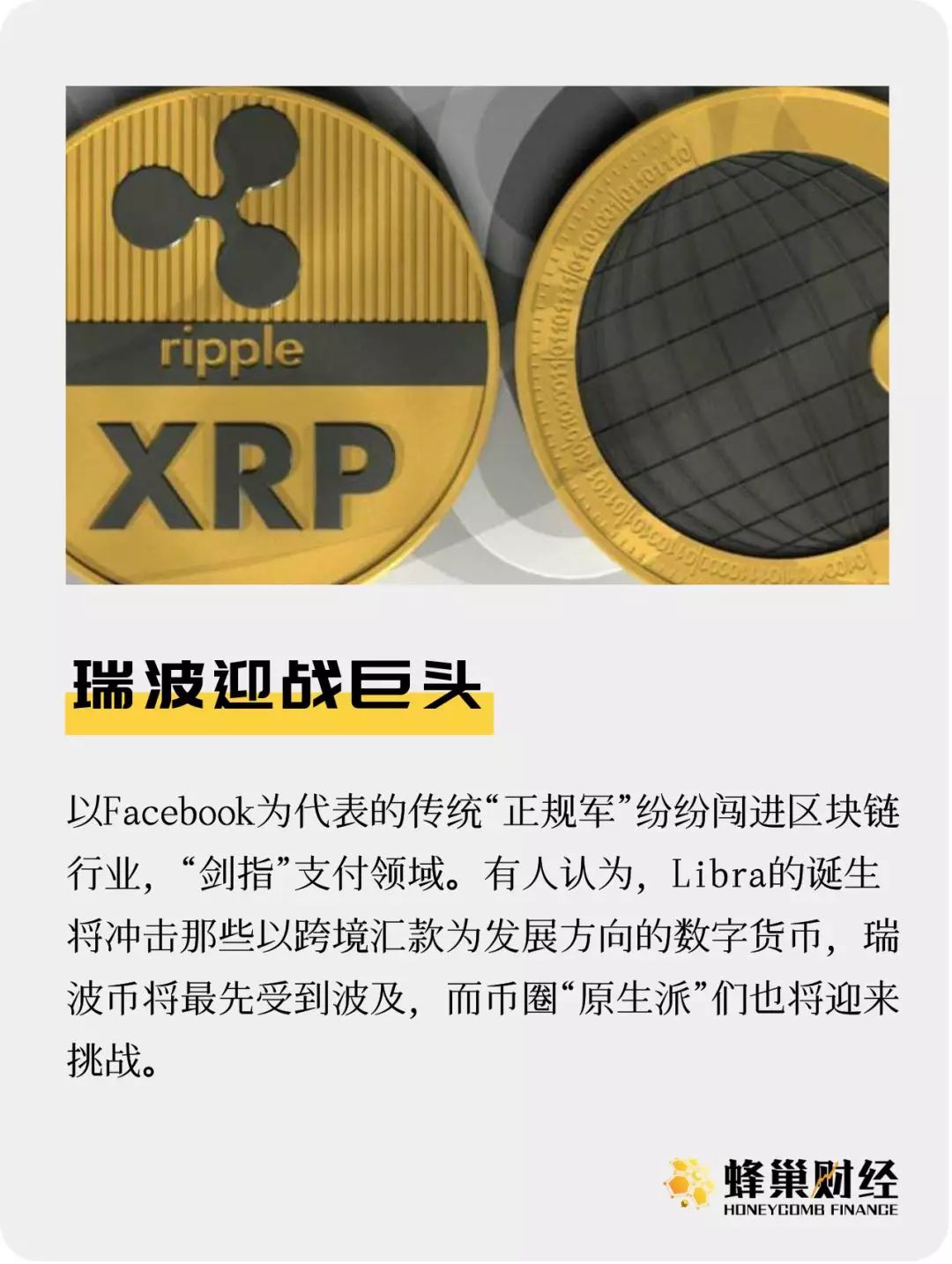 The Libra white paper on Facebook's stable currency project has triggered a wave of discussion. Even Tencent CEO Ma Huateng and US group CEO Wang Xing have joined the ranks of “eat melon”.

In Libra's white paper, Facebook portrays an ambitious financial plan. Some people think that the birth of Libra will impact the cryptocurrencies that are developing in the direction of cross-border remittances.

Previously, IBM, JP Morgan Chase, VISA and other commercial giants have announced their own blockchain-based technology, which is intended to achieve cross-border, inter-bank instant payment solutions. Now with Facebook, Ripple can be described as "four sides facing the enemy."

On June 17, Ruibo announced that it announced a strategic cooperation with international remittance giant MoneyGram to meet the giants. However, after expanding the scope of business, the Ripple currency, which naturally fluctuates with the currency price, is still in contrast with the stable currency such as Libra.

Some people think that the currency instability of Ripple and Bitcoin has always been a flaw in their payment tools. When the traditional "regular army" such as Facebook takes the stable currency into the game, perhaps the entire blockchain industry should be vigilant.

For a period of time, Ripple’s currency performance may indirectly reflect the impact of traditional giants on the currency and chain.

Facebook currency, affecting the nerves of the Internet and the blockchain. People are wondering how the world's largest social networking company will spark a spark with the blockchain industry.

According to the white paper, Libra is targeting the global digital payments sector with conventional currency functions such as trading media, value storage and payment methods.

Facebook has developed an ambitious inclusive financial plan for Libra to create a currency without borders. 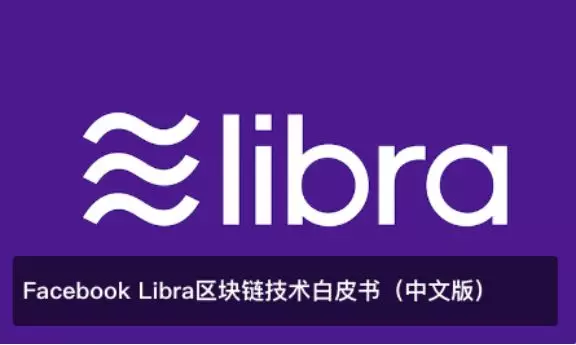 According to public information, Facebook has recruited dozens of giant companies including Visa, MasterCard, Uber, and PayPal to participate in its global cryptocurrency program. If it is completed, it will bring a huge digital currency economic network covering 2.7 billion people worldwide.

Therefore, some analysts believe that the birth of Libra will impact the cryptocurrency of cross-border remittances, and Ripple will be the first to suffer. Some people are worried that Facebook's entry means that the life of Ripple has entered a countdown.

On June 18, Ripple CEO Brad Garlinghouse responded to concerns from Bloomberg. "Facebook's currency plan is positive for the industry and XRP will not depreciate."

He explained, "The goal of Facebook and Ruibo is different. Libra aims to provide consumer-based services, and Ripple is building an infrastructure for enterprises that is designed to connect to a variety of settlement systems around the world."

Brad's remarks directly distinguish Ripple from Libra's strategic positioning. However, there are still overseas analysts who believe that since both parties are reaching out to the global payment market, Libra will not be able to expand its business to B-end customers such as major banks after completing the user's regular payment infrastructure.

However, Ripple has established a certain commercial base compared to the new generation of Libra. According to its official website, the number of banks and financial institutions currently using the Ruibo solution has reached 200, including Standard Chartered and the RAK Bank of the Emirate of the United Arab Emirates.

But the problem is that the giants who try to use the currency to solve the cross-border payment problem can not only be a Facebook one, but the challenge that Ruibo faces is more serious than expected.

Ruibo is enemies on all sides

The founder of the Star Alliance, McCall, was the co-founder of Ripple. In June 2013, McCall left Ripple and founded the star coin a year later. Based on the improvement of Ripple, he continues to work on a peer-to-peer cross-border payment network.

In addition to IBM, in February this year, JPMorgan Chase, the largest financial services institution in the United States, also announced the launch of digital currency JPM Coin for large-scale real-time payment and settlement between banks and enterprises.

At the time, Tom Shaughnessy, head of cryptocurrency research firm Delphi Digital, predicted that after the release of JPM Coin, Ripple will face direct competition.

The entry of traditional giants has allowed the outside world to see the prospects of blockchain technology in the financial sector, and it has also brought a sense of urgency to the “natives” of the blockchain. Despite some voices, the above project is actually a relatively open block network, essentially in the form of a private alliance chain, which cannot impact Ripple's existing monetary system.

But it is undeniable that today's giants including IBM, JP Morgan Chase, VISA, Facebook, etc., have indirectly become competitors of Ruibo.

Under the enemy's four sides, Ruibo may also feel the crisis and accelerate its strategic deployment.

On June 17, Ruibo issued an announcement to announce a strategic cooperation with international remittance giant MoneyGram, becoming a global partner of MoneyGram to use Ripple for cross-border payment and foreign exchange settlement business. At the same time, Ruibo will acquire a $30 million stake in MoneyGram.

According to the information, Speed ​​Money has been operating in more than 200 countries and regions around the world and has provided financial services to millions of customers.

Brad described the cooperation between the two parties as "a huge milestone in cross-border payment by Ruibo." “This strategic partnership will enable MoneyGram to significantly improve its operations and benefit millions of people around the world from its increased efficiency.”

Although Ruibo's development and layout speed is remarkable, but in the case of giants have rushed to cross-border payment market, can Ruibo hold his own "cake"?

Looking back at Ripple's history, it started with Opencoin (former company name) and has a market capitalization of nearly $20 billion. Since its release in March 2013, Ripple has become the mainstream currency in the cryptocurrency market with its amazing return on investment.

Some people describe that Ripple is the second myth of the rich after Bitcoin. "If you spent 5,000 yuan on XRP six years ago, you are a multi-millionaire."

But the glory has passed, and now facing the barbaric entry of regular troops such as Facebook and JP Morgan Chase, whether the price of Ruibo can be stabilized will directly prove whether it has "true ability" and will indirectly reflect the entry of traditional giants into the currency circle. And the impact of the chain.

In the incident of Li Xiaolai's "recording door", he once commented that Ruibo is a silly X project. "The core team is gone, the co-founder is dawning, but the soft silver is a stupid X. If you don't understand the digital currency, you will come to the conclusion that the price will go up…"

Although the above views have a strong subjective color, one unavoidable problem is that in Ruibo's payment system, Ripple is not a necessary condition, and no bank continues to use Ripple for international payment settlement. This is also the long-standing controversy point of Ripple.

Among them, xCurrent is the flagship product of Ruibo, and the service target is bank. Its advantage is that the settlement speed is faster and the cost is lower. xCurrent acts like an intermediary and is responsible for setting up a distributed ledger between banks, without the need for users to buy Ripple.

The service of xRapid can be a bank or other financial institution. However, this requires the payer to first exchange the money for Ripple and then send it to the payee.

The object of the xVia service is the common enterprise, which introduces the concept of gateway. The internal mechanism is similar to xCurrent, and it is not necessary to buy Ripple coins when paying. Therefore, among Rippo's three payment products, only xRapid is actually paid through Ripple, but due to fluctuations in the price of the currency itself, some insiders believe that there are not many organizations and companies using xRapid.

Compared to Facebook's stable currency, currency fluctuations of Ripple and Bitcoin are often considered to be important defects affecting their payment currency. After the "regular army" entered the market with stable coins, not only Ruibo, I am afraid that all the "natives" of the currency circle will be affected.

However, at present, Ripple’s currency price has stabilized. In the past week, Ripple has risen by 6.05%, which is second only to Bitcoin in the top five mainstream currencies.

After all, the real regulatory problems are still a problem in front of giants such as Facebook. In a short period of time, it is difficult for the giants to make substantial progress.

As Li Xiaolai said, “If Facebook successfully issued a stable currency, it would be equivalent to a successful 'founding country'.” This difficulty can be imagined.

Internet giants are arranging cryptocurrencies. Do you think there is still a chance for blockchain entrepreneurs?

Data show that only 23.3% of nodes are ready for ETC Agharta upgrade