Unknowingly, Bitcoin's price is about $10,000 from the important mark, leaving less than $300.

Recent good news in the cryptocurrency circle continues. Facebook released the Libra white paper on the digital currency project, which triggered a big discussion on the stable currency by governments around the world, and caused great repercussions among Internet giants such as Amazon, Google, Ant Financial, Tencent, and Meituan. For a time, people's attention to cryptocurrency and blockchain has once again warmed up, and the level of excitement discussed has made people feel the heat of this circle two years ago. Only after the baptism of the bear market, this kind of heat is more rational thinking, rather than simple utopian fantasy and speculative fanaticism.

This kind of heat has made the practitioners who have been immersed in the bear market of digital currency for nearly a year feel that it has not been a mistake to stick to it for a long time. Their persistence has been recognized and rewarded. People’s confidence in Bitcoin is stronger than at any time of the year. Reflected in market sentiment, more and more people believe that this round of bitcoin will open a big bull market that has never been seen before, it will break through the peak of the last round of bull market – 20,000 US dollars.

Now, Bitcoin stands at the threshold of $10,000 and is tempted and embarrassed.

Traditional wealth has shown an extraordinary interest in Bitcoin

In fact, as early as the bitcoin rose, institutional giants have already entered.

Some time ago, a news report by Forbes contributor Billy Bambrough was widely circulated in the industry. The writer learned from his sources that there are 25% of the total amount of Bitcoin in the market. 4.5 million bitcoins.

When the news came out, the price of Bitcoin on Coinmarketcap was $8,552,89. If the deal is reached, it will be as high as about $38.5 billion. It is worth noting that, in contrast, Ma Yun’s net worth is only $37.3 billion, which means that he has exhausted his assets and cannot buy so many bitcoins.

However, the source told Forbes that many wealthy or corporate entities are interested in Bitcoin, and they want to enter or even control the market.

This news, while shocking, also opened a hole for us to observe the interest of the giant crocodile.

If we take a long time to observe, it is not difficult to find that since the encryption market entered the recession in early 2018, many rich people have undergone a subtle change in their attitude towards bitcoin or blockchain.

In January 2018, Soros said at the Davos Forum that "bitcoin is a typical bubble", and the words inside and outside are full of ignorance and distrust of such assets. But in the following April, Bloomberg revealed that members of the Soros family office indicated that they had been approved to invest in encrypted assets. In addition, Soros's family office is the third largest shareholder of Overstock, the veteran of the "encryption world."

Almost shortly after Soros’s “Bitcoin is a bubble”, JPMorgan Chase Jamie.Dimon’s remarks about his September 2015 talks about the bitcoin market scam, he said:

"As Bitcoin grows bigger, I feel the same as the government, and I just have a different view from others."

("The bitcoin to me was always what the governments are gonna feel about bitcoin as it gets really big, and I just have a different opinion than other people.")

If the callback speech is just the outpost of Jamie's attitude, then this year, JP Morgan Chase directly on the Quorum blockchain is to give him a "face".

In addition, Buffett's subtle shift in attitude toward bitcoin and blockchain is also worthy of attention. Compared with the 2018 shareholders' meeting, Bitcoin was called "rat medicine". In February this year, Buffett's position in the interview with CNBC has changed slightly:

“The blockchain is clever and important, but Bitcoin doesn’t have any unique value.”

Although it did not change the attitude of deprecating bitcoin, it praised the blockchain.

The conditions for institutional admission are becoming increasingly mature

From the above texts, the attitude of institutions and traditional wealthy people to the bitcoin and blockchain industries is becoming more and more active. For some "adventive" people, this attitude can even be called "hungry." . At the same time, the conditions for the organization to enter the market are also maturing.

From a technical point of view, the just-involved need for the organization to enter the market – the custody industry has developed to a more objective scale.

Let's take a look at the report that Bitwise posted last month:

The crypto asset custody and custody insurance market is growing rapidly, which is an important driver of the increasing efficiency of the crypto-asset market.

The report lists nine well-known crypto asset custodians, five of which have received regulatory “nodding”: Kingdom Trust, Gemini, itBit, Coinbase Custody. In addition, Bitwise estimates that Fidelity, Xapo, Anchorage, and DACC are expected to be approved by the regulator this year.

Among them, Gemini and itBit's operator Paxos are both stable currency issuers approved by the New York Financial Services Authority, and their GUSD and PAX respectively occupy the fourth and third place in the stable currency market share, which will enable traditional institutions to enter. The field is smoother.

Although DACC has not yet obtained regulatory approval, considering that it was included in the bottom of the Wall Street giant by Bakkt at the end of April this year, its compliance moment is just around the corner.

The Wall Street giants are not idle. In 2018, Bloomberg revealed that Goldman Sachs Group, JPMorgan Chase and Northern Trust Group were all entering the field of crypto asset custody. Among them, Goldman Sachs led a $15 million investment in crypto asset custodian BitGo last year. This year, New York Mellon Bank was exposed to develop a geographically-distributed key storage product with Bakkt. 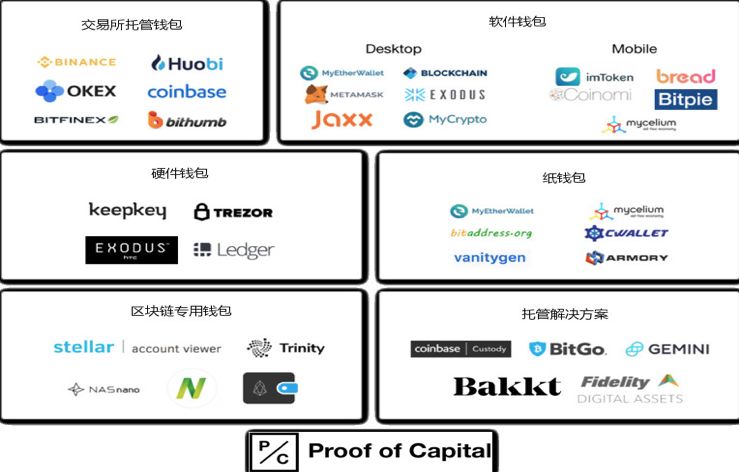 If we expand our horizons, it is not difficult to find that the encryption asset escrow industry has formed an ecology. This gradual formation of a multi-security mechanism will help shape market confidence, smooth the flow of large funds, and lay a solid foundation for the entry of institutions. Domestically, including Invault, JadePool, Cobo, etc. have entered the field and have obtained or are actively applying for regulatory approvals in the relevant regions.

Observing the rich from the data admission: GBTC indicators are eye-catching

Another indicator for observing traditional institutions and the rich is GBTC, the bitcoin trust fund of the grayscale grayscale (Grayscale), which is a fund for investors with a single investment of more than $50,000. It can reflect the situation of the institution's admission. According to the data disclosed last month, the overall scale has reached 1.97 billion US dollars, accounting for nearly 94% of the company's fund pool.

“Grayscale purchased more than 11,000 BTCs in April 2019, while the Bitcoin network mines 54,000 BTCs per month. The number of BTCs purchased in grayscale accounts for about 21% of BTC's global monthly supply. Institutional investors are FOMO (fear of missing) bitcoin." Bitcoin flowing into GBTC as of April 2019 | Source: The Block

If we look further at The Block's analysis, the bitcoin that flowed into the pool in April was the sum of the first four months of bitcoin. Estimated in US dollars, the grayscale bitcoin increase in April was $58.2 million, which is very close to the all-time high – $60.8 million in December 2017.

From a premium point of view, GBTC's current transaction price is $11.1 per share, which makes the hidden price of Bitcoin more than $11,255. In turn, GBTC investors need to pay a premium of about $3,000 relative to the market price of bitcoin. Buy a share of GBTC. But even so, its fierce growth is still a strong testimony to the interest of institutional investors.

Why are rich people investing in bitcoin?

Why are traditional institutions and wealthy people sweeping bitcoin? It may be for three reasons:

First, the international environment is turbulent, and the demand for funds is safe.

One turning point in this round of bitcoin "mammoth" was in early May, when China and the United States did not reach an agreement on how to end the "trade war." Affected by this, the price of Bitcoin skyrocketed, breaking through the important point of 8,000 US dollars in one fell swoop.

In addition to gold, Bitcoin is increasingly becoming a non-sovereign value storage method in people's minds. In the case of geopolitical turmoil, it is not surprising that Bitcoin is popular. As long as the long-term situation remains unchanged, the demand for institutions and wealthy groups to enter the crypto assets will not change, and it will not be detailed here.

In the current economic situation, people have strong easing expectations for China-US monetary policy. If we are going to face a round of money release, then money will actively seek anti-inflation assets to avoid depreciation. In this case, the amount of money is strictly controlled at 21 million bitcoins, which naturally becomes one of the assets pursued by money.

Third, Bitcoin is becoming an asset for young people.

The incremental space of the encryption market depends on the number of prospects in the future, and the survey conducted by Blockchain Capital in April shows that both bitcoin's attention, familiarity, perception, belief, and buying and holding bits In any aspect, such as the propensity of the currency, young people aged 18-34 have shown eye-catching data:

More exaggerated is that the number of people investing in bitcoin in the millennial generation is half of the investment stock market. This means that Bitcoin may become a young person, the asset that the next generation is chasing. Just as after 70s and 80s chasing real estate, a new generation of young people will have their own asset class, and this asset class may be bitcoin.

It is not difficult to imagine that the organization and the wealthy group have observed this trend, and the early sweeping of goods is also the layout of the battlefield of “Young People and Bitcoin”. If Bitcoin is the choice of young people, why don't smart money bet on assets in the future?

The FOMO moment is coming soon?

In early June, bitcoin analyst and Fundstrat co-founder Tomas Lee said in an interview with Wei Zhou, chief financial officer of Bin An Poincast, that Bitcoin would rise to $40,000 in five months once it broke through $10,000. . Because breaking through $10,000 will be the real sign of the arrival of FOMO (Fear of Missing Out).

Earlier, Tom Lee had conducted an investigation on Twitter last month and asked how much the BTC price would ignite the market's FOMO sentiment. The survey results show that nearly half of the participants believe that when the BTC reaches 10,000, it will cause the market to lose fear. He said on Twitter: "When the BTC breaks through $10,000, those who have succumbed to 90% of the BTC slump or think that Bitcoin is dead will have lost fear." That is, if Bitcoin reaches this point. Then, most people who have previously attacked Bitcoin will change their opinions and think that the original view is wrong and thus join the event.

The $10,000 mark is crucial. Rich people and institutions have gradually entered, and where will the bitcoin market go?