In the early morning of March 24th, Beijing time, the DragonEX exchange issued a notice stating that its platform digital assets were stolen, and called on all parties to jointly block hackers. It can be learned from the announcement that more than 20 kinds of mainstream virtual currency assets such as BTC, ETH and EOS on the DragonEX exchange have been stolen. Although the exchange officially did not announce the specific amount, it was initially estimated that the exchange was stolen. The large number of currencies and the large amount of damaged assets are rare in the development of the entire blockchain.

The thieves’ implementation of stolen money and money laundering can be divided into two stages:

1. The stage of stealing money: occurred from 1 am to 8 am on March 24, the hacker transferred more than 20 currency assets such as BTC, ETH, EOS, etc. of the exchange to his personal account, and completed asset transfer and stealing;

2, the stage of washing coins: began on March 26th so far, so far, hackers have transferred digital assets worth 929,162 US dollars to various exchanges, it is likely to have been sold, the remaining 5,099,121 most of the funds are still attackers Among the associated accounts, there is the possibility of further inflow into the exchange, and all parties need to jointly implement the fund closure.

The timeline of the stolen money: 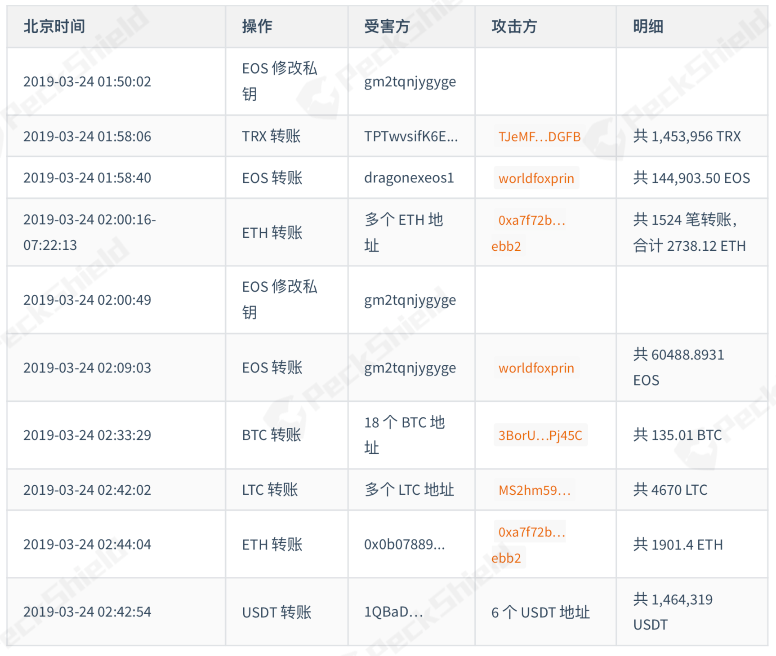 PeckShield security personnel initially restored the chain transfer record behavior of mainstream currencies such as BTC, ETH, EOS, TRX, USDT through the hacker address published by DragonEX, and restored the entire process of the exchange of stolen coins: 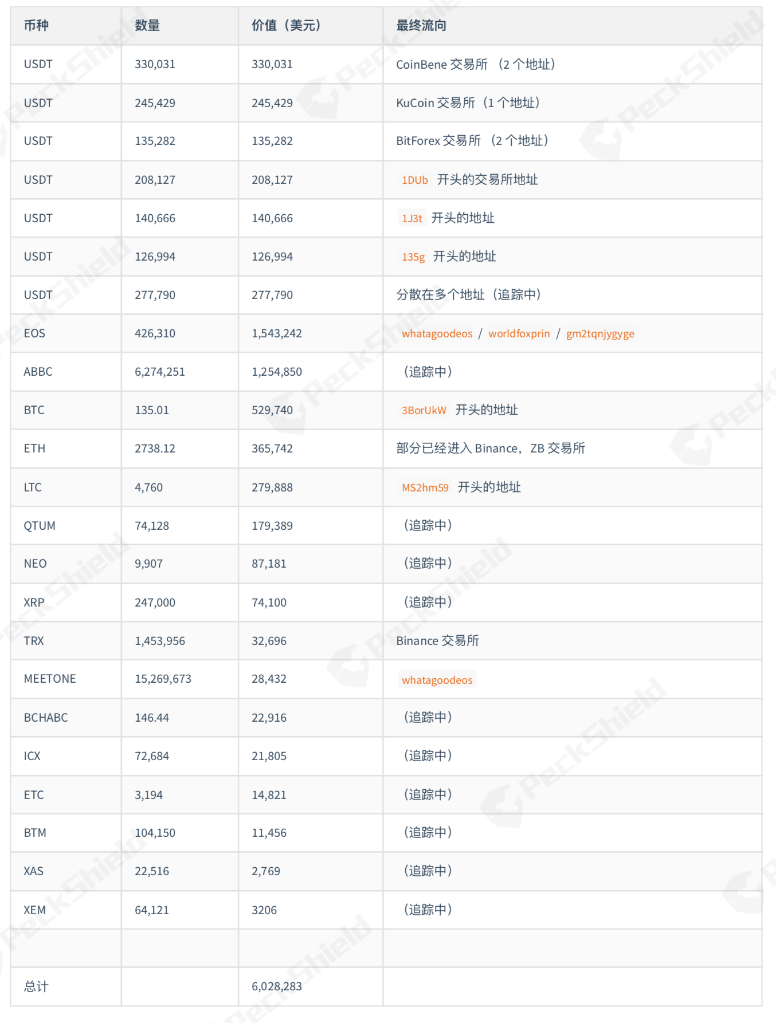 (Analysis of the theft of major chain assets:)

The following takes the USDT and TRON main network as an example to analyze the whole process of “hacking” stolen coins:

1. At 02:42 on March 24th, DragonEx named 1QBaDdhCTC2k9WWFhCXCJvYHpVSqLSRxaJ to transfer a large number of USDTs to the following six addresses:

2. After receiving the USDT, the above six addresses will be transferred to the exchange gradually through multi-layer conversion. Currently, PeckShield researchers initially locate the current USDT asset distribution as follows: 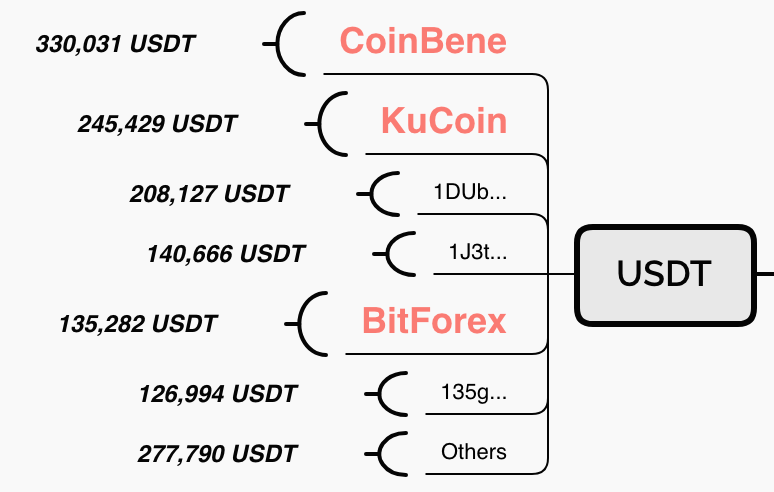 The following figure depicts the process of the stolen assets of the TRON address announced by the exchange:

The details of the process are as follows:

1. On March 24th, the address of DragonEX named TPTwvsifK6EiQ1mm6b4eEQAcammL5215g6 is transferred to TJeMF6CpEDeG94UAF7d4dzjXkgrwwtDGFB address 1,453,956TRX;

2. There is no change in the TjeM…DGFB address between March 24th and March 26th;

3. On the 26th of March 26th, between 9:00 and 10:00, the address TJeM…DGFB separates the 1,453,956TRX received from 03-24 to the 6 new addresses. At the same time, all the assets obtained before and after the 6 addresses are transferred to TR8T47ouBgr7V2ssDjDaz9PJ7JaPH3kwrR address, PeckShield researchers found that TR8T…kwrR address suspected currency exchange exchange address;

In this security incident of the DragonEX exchange, the hacker transferred all the major digital currencies in an exchange within a short period of time, and then confuses the funds input through other digital currency exchanges, and the funds are smoothly washed out.

However, most of the stolen assets are still controlled by hackers. The parties in the exchange, including the real-time transaction alert of hacker account funds, can assist security companies to lock and block stolen assets and help victims to reduce as much as possible. Loss of digital assets.

In general, the hacking of exchanges is related to the digital asset security of many users. PeckShield security personnel appeal to all major transactions to improve the security and risk control capabilities of the platform, and if necessary, look for a professional third-party security team to assist.

The blockchain has come in the future, are you ready?