From June 20th, XMX suddenly surged rapidly, and the currency circle was also swept by Yuhong's marketing copy, which is exhausted. This long-lost "blockchain pyramid sales godfather" high-profile out of the mountain, what is the intention? 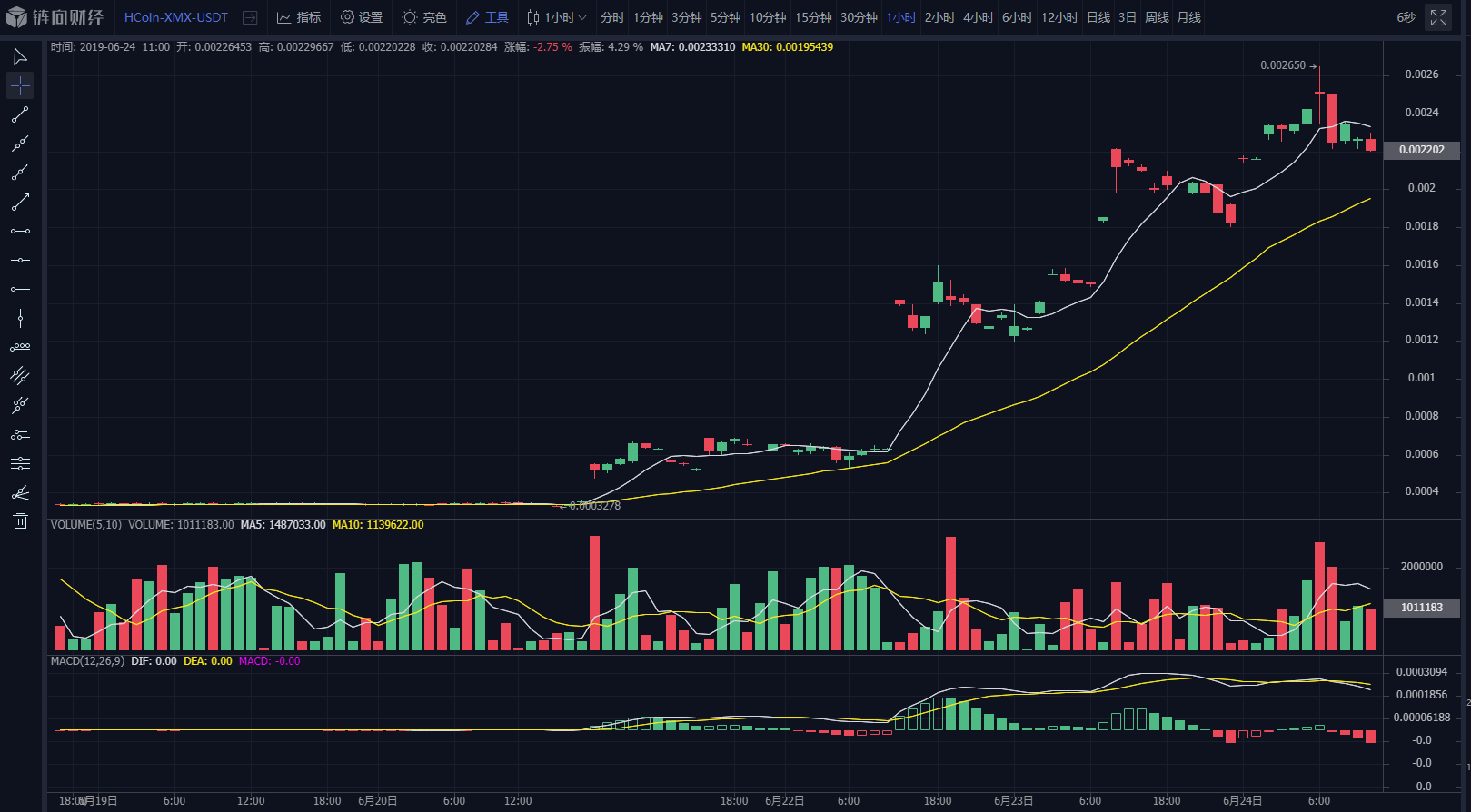 Yuhong returned with his XMX and talked 5 times. However, because he has been deeply rooted in the deeds of the currency, many people think that this is his another means of cutting and distributing the leek. In the end, he was swept away by the group of friends and once again fell into a fame.

Although the old leeks will not be fooled, the new leeks are not clear about the past history of Yuhong, so there are still some people who follow the train, and some of them are also true fans. These artificial people have swollen XMX prices, and jade Whether red will still be harvested is still unclear. 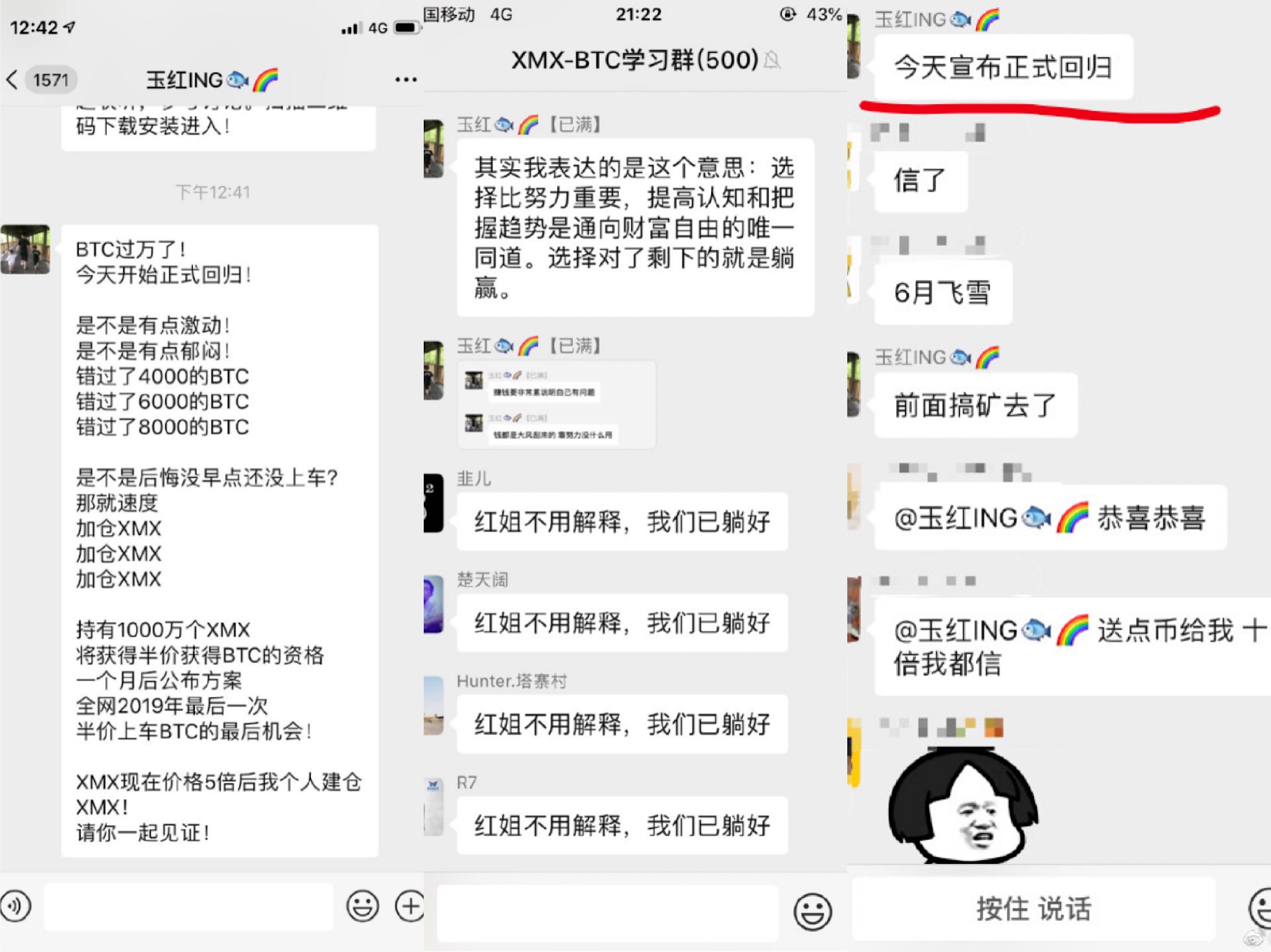 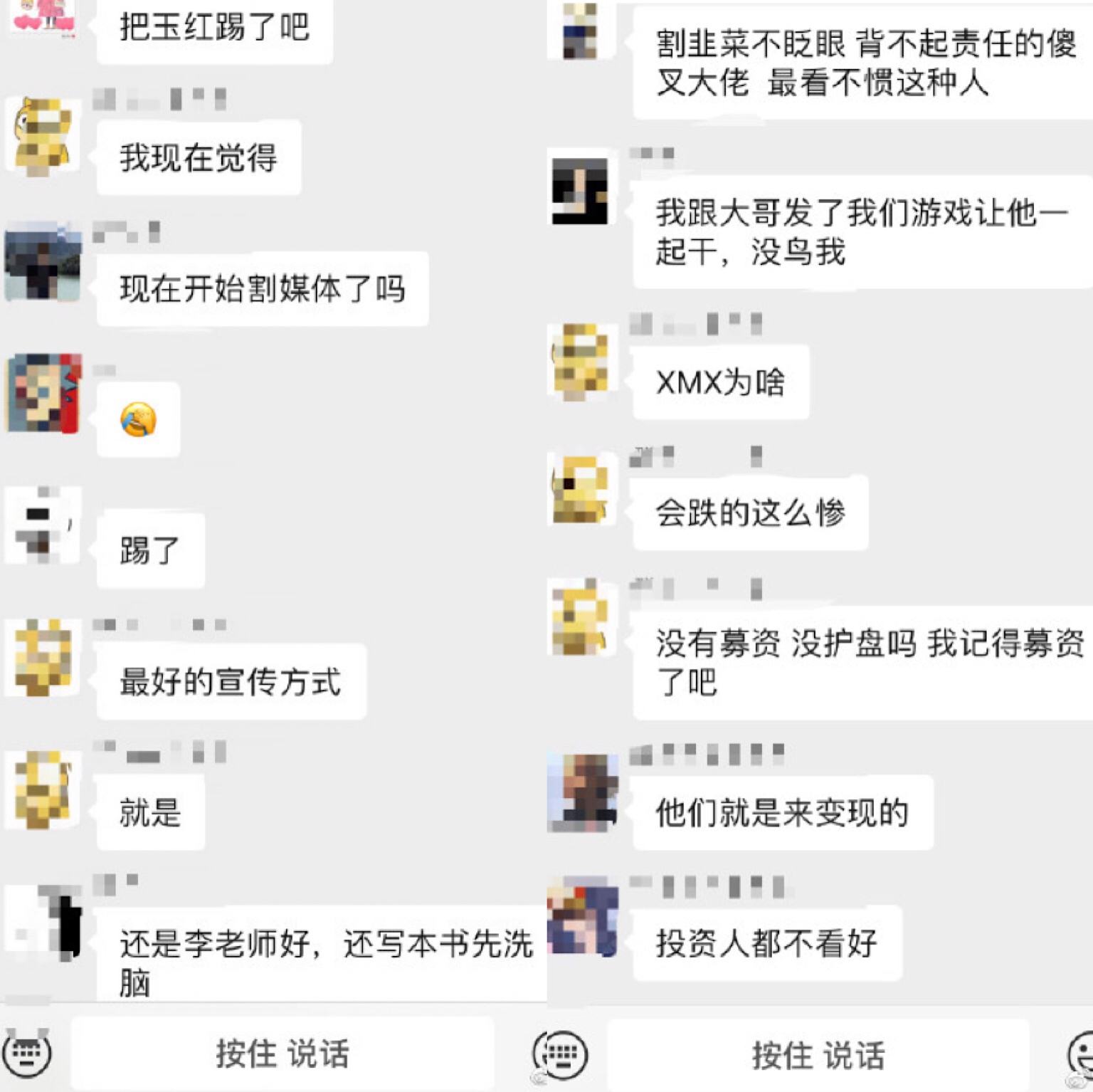 What did Yuhong, who is known as the “blockchain pyramid scheme godfather”, do something to make the currency circle sneer? Today we will review the two major deeds of Yuhong.

In May of last year, Yuhong, who was famous in the currency circle for creating and launching the three-point community, released a project called XAMX, which was at the peak of the EOS super-node campaign, and the heat was also at its peak. Therefore, the EOS's popularity was “red”, and he made a big publicity for the project XMAX he initiated, and also hit EOS by surprise.

On May 28th, Yuhong said on the “Chain Chain Application Summit Forum and DemoDay” of the Guizhou National Data Expo, which was participated in the chain: “The only value that is determined this year is Bitcoin, and EOS is the largest MLM. ”

Yuhong also analyzed the reason. "One is 21 super nodes. This design is a very MLM design. Because you have to be worth 100 million to play. Second, you have to deceive me a lot of fans to buy. Third, a lot of middle class. Classes and ordinary people are not involved in this community. This is very problematic. Therefore, I think EOS is the world's largest air currency and pyramid currency. This is my opinion. You bought it and quickly cleared it." 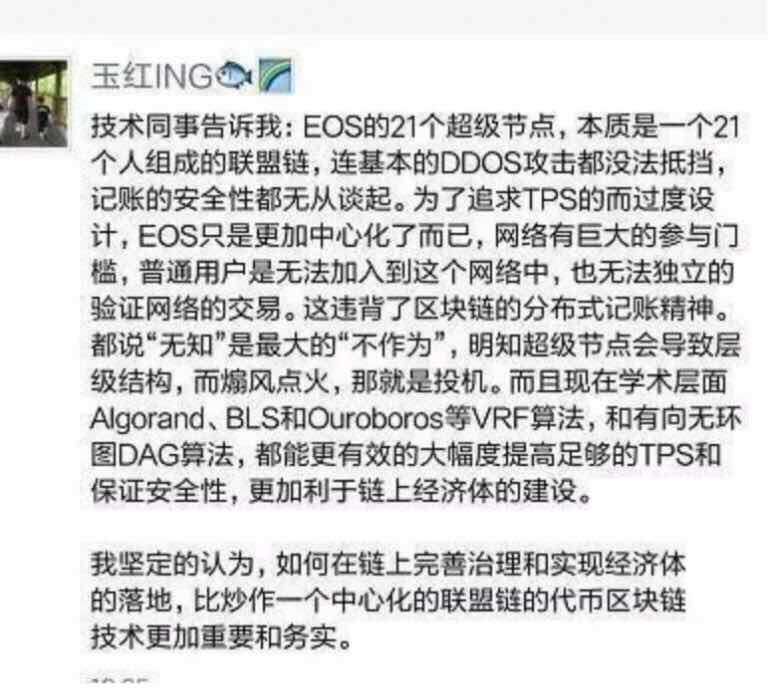 On May 29, the 360 ​​security guard official Weibo suddenly announced that it found the EOS blockchain "epic-level" vulnerability, which can completely control virtual currency transactions. After that, 360 Chairman Zhou Hongyi also forwarded the news on his own Weibo.

Everyone guessed that the news of 360's release seemed to echo Yuhong's previous remarks about EOS. Therefore, this made Yuhong once again become the topic center of everyone. At that time, the price of EOS was suddenly dropped because of 360 and Yuhong's “one sing and one harmony”.

Here, people think that in fact, this is a well-planned marketing event, 360 and Yuhong both made a speculation for themselves through the EOS vulnerability incident. And there is news that in fact, Yuhong and Zhou Hongyi have a very intensive intersection, and the fun tour he founded was acquired by 360 in 2014. According to the news at the time, Yuhong was a senior vice president in the 360 ​​internal rank, and the two were quite familiar.

Although in this case, many participants are inevitably suspected of "cutting the leek", but people think that this kind of suspect is trying to step on the other people's means of superiority is not very clever, and the jade red as the fuse of this incident is even more irrelevant. Because Yuhong is so high-profile, the public voice sings EOS, plus 360 together for two consecutive days before and after the foot, "one sing and one" for EOS, the connection before and after, let everyone question Yuhong in order to cut the leeks, unscrupulous.

The community's gameplay has detonated the entire circle. Various currency groups have participated in it and built their own teams. Among them, there are many ink weather co-founders Zhao Dong, Xue Manzi, Creation Capital, etc., countless people. Announced to join the Global Community Alliance, in just 12 hours, in addition to the founding group of 99 500 people community quickly established. 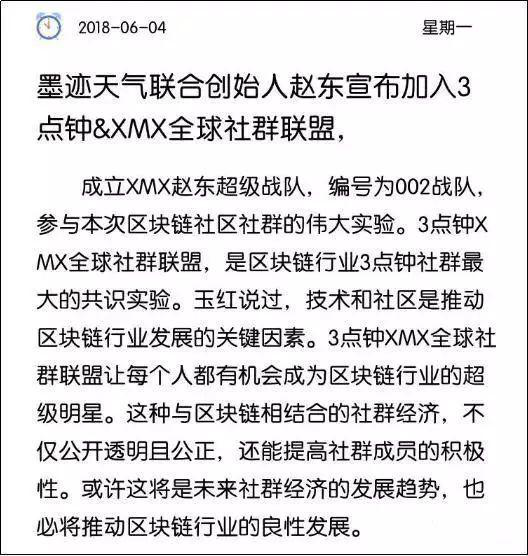 On the surface, with such heat, countless people are full of confidence in the XMX project.

However, the development of things has turned around. After XMX's online trading platform CoinX, it first rose from RMB 1 to RMB 30, and then fell to 2 points in 1 day! The decline was actually 1500 times! And in this one-day period, the transaction volume is nearly 40 million yuan. 30 yuan in the morning, 2 in the afternoon, and 2 in the evening, this price change is really unacceptable. Therefore, the currency circle began to issue various doubts, which is considered to be a big action of cutting red cabbage. 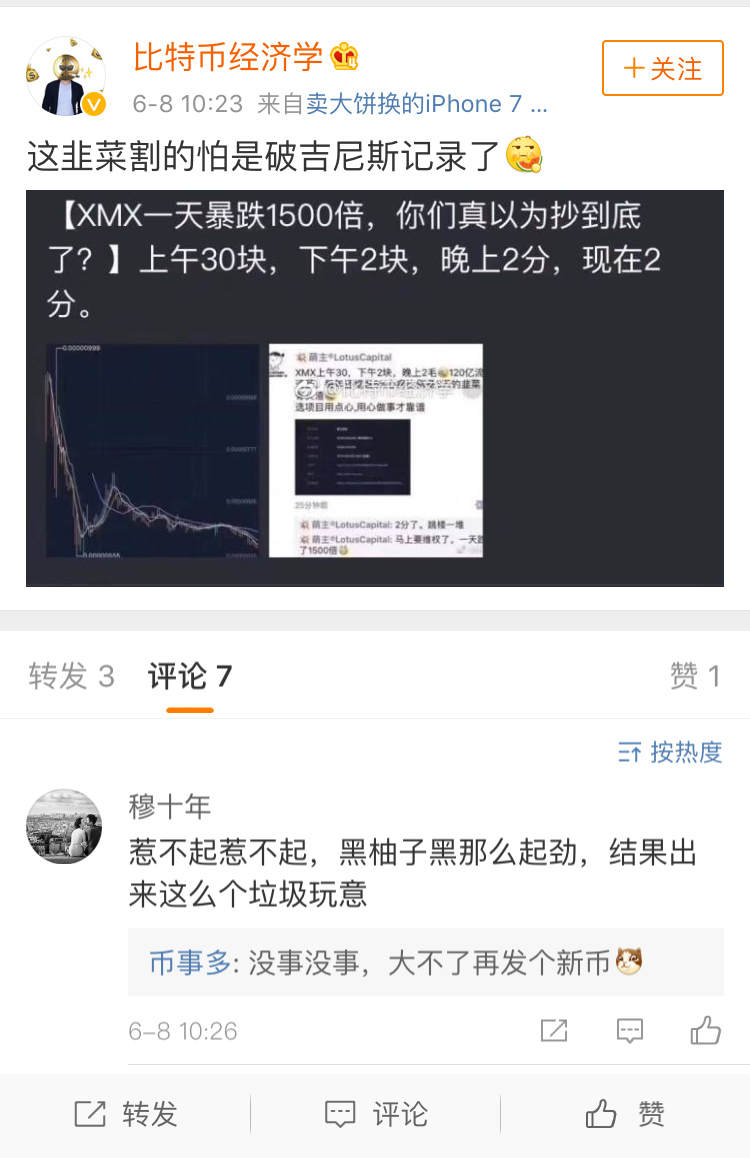 Later, Yuhong responded that “XMX investors are institutions. We don’t even have amaranth, how can we cut it?” But no one believes him again, because a lot of money friends have already died on XMX, and everyone calls XMX. The project is “chicken harvester”, so Yuhong is also affixed with the nickname “cutting the small stalk of leeks”, “the first person in the blockchain marketing” and “the godfather of the blockchain pyramid scheme”.

Later, Yuhong also issued a statement saying that 10 million XMX will be used to reward those who have blacked his own media, and tried to soothe the lost money friends, but then did not get a response, because in the eyes of everyone, 10 million XMX is The air has no value.

In fact, even if XMX did not have this black history, Yuhong claimed that there are various problems in the XMX project itself to create the "world's first public chain." Earlier, after the EOS vulnerability incident, netizens made a deep understanding of it and discovered the problem of the XMX project: XMX copied a lot of EOS code (Yuhong also called EOS as air); by reading XMX white paper, XMX adopted The platform model is very similar to the QunQun project invested by Li Xiaolai (the QUNQUN model on the left and the XMX model on the right). It is considered to be plagiarism, and it is changed after Li Xiaolai persuaded him to change it; the white paper is full of mistakes. The Chinese and English versions are inconsistent; their code updates are stagnant and there is no technical team at all.

Later, with the collapse of XMX and the emergence of various doubts, the XMX price was directly zeroed. Later, after the audience's embarrassment, Yuhong gradually faded out of sight. Now, his return has once again caused heated discussion, and still wants to come back through the community.

Here, we do not delve into the reasons why Yuhong once again “returned”, but some people think that it is too naive for Yuhong to cut a leek by one coin, because his company sells billions, and the mine layout is several hundred million. All the coins in this year's layout are making a lot of money. Do you still need to recite the tens of millions of dollars? Everything you do now is to prove yourself and give an explanation to the cornerstone."

Moreover, Chen Weixing, who was once questioned as an important investor in XMX, also issued a message saying that “XMX is not a small amount of money, and the team is working.” Therefore, the “return” of Yuhong is puzzling, but it is not acceptable. Ignore the pros and cons of possible.

No matter what his purpose is, his past behavior has been labeled by the currency circle, and it is difficult to get rid of it. Regardless of whether this time is directed at “cutting the leek”, it should be reminded that no matter what kind of investment, whether you are old leek or new leek, you must invest in the project risk to avoid unnecessary investment. Loss.