Over the past 30 years, Microsoft has established a unified standard for commercial software models through its own efforts and has become one of the IT giants. Microsoft, which missed the wave of mobile Internet, faced the blockchain this time and no longer hesitated.
Microsoft is the first IT company in the world to enter the blockchain technology field. Through years of strategic investment and layout, it has become a pivotal role in the emerging technology solution market. Microsoft is not only pushing the blockchain faster, more practical and more successful, but also creating the right time for itself, from the blockchain revolution.

Since joining the Bitcoin market in 2014, Microsoft has been involved in and supported multiple blockchain projects , including Ethereum, R3, and Little Ant. Even Azure (Cloud Computing Platform) provides its own blockchain services , which is supported by many well-known banks, financial services companies and exchanges.

This article simply outlines Microsoft's blockchain layout map, showing how it can work together with multiple partners to lead the blockchain market innovation step by step.

The platform is constantly updated and new members are added in 2015-2016. From well-known blockchain technology companies to weak community blockchain application startups, the Azure platform has attracted many new blockchains with unprecedented openness and bravery. By. The Azure BaaS platform has also expanded into a “certified blockchain market”.

Bletchley program
On June 15, 2016, Microsoft announced the launch of a program that Microsoft called "an open, modular blockchain component" that will be driven by Azure. This program is called Bletchley, which is "creating a blockchain enterprise ecosystem with Microsoft's own architecture."

Subsequently, Microsoft continued to expand Bletchley's architecture by releasing Bletchley v1, the first release of the Alliance Blockchain Template, to create a diverse distributed ledger ecosystem for private development/testing, focusing on private multi-node federation networks. demand. Extending the support of Bletchley v1 to the Azure Marketplace has inspired new partners to take an interest in their blockchain solutions.

The launch of the Bletchley program allows Microsoft to provide open, flexible, and modular blockchain services to meet the specific details of partners and customers in different fields. Since then, Microsoft and its partner companies have been intensively understanding the needs and concerns of the industry, while developing the necessary technologies and ecosystems to promote the wider use of distributed books. It takes time to create such an open ecosystem, and Microsoft's initiative will accelerate the massive popularity of the blockchain. 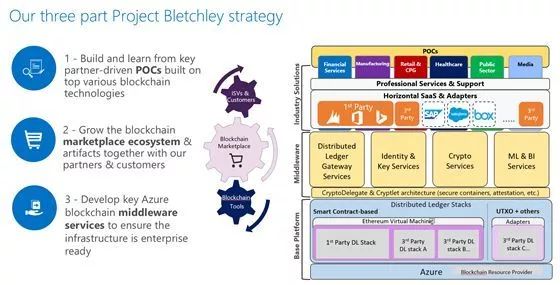 In February 2017, a group of global companies representing the oil and gas industry, the financial industry and the software industry officially launched the Enterprise Ethereum Alliance, which is committed to developing Ethereum into an enterprise-level blockchain.

The development of blockchain was first developed from Bitcoin to Ethereum. Ethereum is a platform, and Bitcoin is a set of transfer payment systems. Now the development of Ethereum hopes to attract everyone's attention, because it has a lot of application stores on it. Ethereum has a special Ethereum browser, we can find out when the number of transactions is done. It's a bit like the Apple App Store, I can download it at any time.

“We’re almost gambling on cloud services,” said Marley Gray, who was also head of Microsoft’s financial services technology strategy. The goal is to provide a cheap platform for blockchain solutions to integrate into customer applications. Applications without previous blockchain technology or smart contract experience can create their own smart contract private blockchains in 15-20 minutes.

Publish blockchain concept validation framework
In May 2017, Microsoft announced a new framework to accelerate blockchain deployment through Enterprise Proof of Concept (PoC) on the Azure cloud platform. Designed to simplify the embedded proof of concept process. According to Microsoft, the framework requires a prototype blockchain network, associated APIs (application programming interfaces), and hashing services and signature services to support testing.

In a blog post, Microsoft said the new framework is attractive to companies that want to test potential applications in a more timely manner, and is expected to take up to a year and up to $300,000 in development costs.

Microsoft's Azure cloud service is one of the core of the company's blockchain strategy and the core of the framework. Microsoft said "through the framework, customers and partners can focus on creating truly innovative applications, demonstrating the potential of the blockchain, and spending less time and resources on consolidation tasks to get the underlying proof of concept to work."

This framework can help banks, insurance companies and manufacturers, etc., to establish shared digital ledgers and automated smart contracts, and to address privacy, speed and management issues in the commercial penetration process. The Coco framework creates a trusted network by leveraging the Trusted Execution Environment (TEE), such as Intel SGX and Windows Virtual Security Mode (VSM). In the TEE environment, the establishment of trust between network physical nodes does not require mutual trust between node owners, and can handle various user requests while ensuring the confidentiality of the blockchain state, thereby ensuring the key to secure blockchain protocols. The confidentiality and integrity of code and data enables blockchain applications to run efficiently on fully trusted member nodes.

Inter-node operations in the Coco framework eliminate the need for verification results, providing support for non-deterministic calculations, allowing transactions to interact with external systems based on application needs, enriching application semantics and scenarios. At the same time, it also simplifies the consistency protocol and increases the speed and delay of the transaction. The data shows that comparing the use of the Coco framework and using Ethereum itself to run a large number of transactions, running through Coco, can process more than 1600 transactions per second with a latency of 125 milliseconds. In Ethereum, only 15 transactions per second can be processed, with a delay of 56,520 milliseconds, which is almost one minute.

Mark Russinovich, chief technology officer at Microsoft Azure, said: "Coco brings another approach to book construction that provides enterprises with the scalability, distributed governance and higher confidentiality they need. Sex, without sacrificing the inherent security and immutability they expect." Microsoft is currently testing the Coco architecture with its partners R3, Intel, JPMorgan and Ethereum, and plans to release the application provider interface and development code this year, and put Expand the scale of development on the GitHub repository.

IC3 has developed several solutions based on blockchain technology that can transform the financial industry and is now working with financial and banking leaders, governments and open source developers to transform these solutions from trial versions to truly reliable financial systems. And verified efficiency.

York E. Rhodes III, Microsoft's major technology global business strategist, said: "In the study of blockchain technology, we learned about the work of the IC3 team and their impression of the community's practices and contributions. Deep. We are very close to IC3 experts' ideas on extension, accessibility and other interesting aspects of corporate system blocking technology implementation. Their research synergy is in line with our decision-making on enterprise-wide decision making. We are happy to join IC3. Team and work closely with them to implement ambitious projects."

Decentralized identification public chain
On February 13, 2018, Microsoft announced in its official blog that the blockchain-based decentralized ID verification technology will be integrated into its Microsoft Authenticator application. The program was launched by Microsoft in August 2016 and is now used by millions of people. If the user agrees, Microsoft's authenticator will act as a user agent to manage the identifiable data and encryption keys. In this basic design, only one person's ID is rooted in the blockchain. Identity data is stored in a de-chained ID Hub encrypted with a specific encryption key. Microsoft claims that they do not see the user's personal information. Once the functionality is integrated, the application and service will be able to interact with the user data by requesting granular consent through the messaging pipeline.

After considering multiple criteria for decentralized identity systems, Microsoft said they decided to choose blockchain technology and protocols because the technology is "very suitable" for this task. Microsoft pointed out: "Some public blockchains, including Bitcoin, Ethereum, Litecoin, etc., provide decentralized identification of documents, document DPKI operations, and have been anchored for anchoring user identification. solid foundation."

Since October last year, government agencies in some countries around the world have also considered the integration of blockchain technology in identity management systems, and related data verification services will be gradually transferred from enterprises or governments to individual citizens.

The relevant person in charge of Microsoft wrote in the blog: "We are very excited to find the amazing things that developers and organizations will build on this open source identity framework. We are equally excited to transcend national borders, blockchains, organizations. And the potential social benefits of the company’s identity."

About positioning
Blockchain technology is undoubtedly significant and may be the most important underlying iteration of the Internet. At the same time, the entire process of blockchain from concept to design to formation is still very complicated. As an industry explorer, it often lacks peripheral support. How to improve the production relationship of blockchain is very difficult. As Li Jiang of CTO of Microsoft (China) Co., Ltd. said: "How can we use the platform concept, how can we use the blockchain's multilateral market, how can we play its zero knowledge cost, long tail effect, and put a lot of users, provide It is very important to put it on the blockchain, and solving a certain problem is not the nature of the blockchain."

The blockchain is the starting point, and more importantly, it is necessary to build a platform and ecological construction through the blockchain. We look forward to giants like Microsoft, which can continue to innovate in emerging technologies such as blockchain and lead the industry.

What new developments are there in the Microsoft Azure blockchain? How is the cloud vendor platform laid out in the blockchain? What are the business use cases of Eitafang's current attractions?