Bitcoin successfully broke through 10,000 US dollars, hitting a new high, and the discussion about bitcoin prices once again plunged into a climax, and the call for breaking new heights is getting higher and higher.

Many investors saw that they rushed into the market, for fear of missing a train to wealth, " you may never see the $10,000 bitcoin ", and the sound is endless.

Below, Gikee wants to pour a cold water with a frenzied investor. The higher the rise, the more it falls.

Bitcoin is forming a structure of head and shoulders, and the upper 12,000 US dollars has a lot of pressure. If it can't break through, it will form a huge selling disk. Panic selling will drive the profitable disk together with the chips that are stuck above. Down, the destructive power can be seen in general. 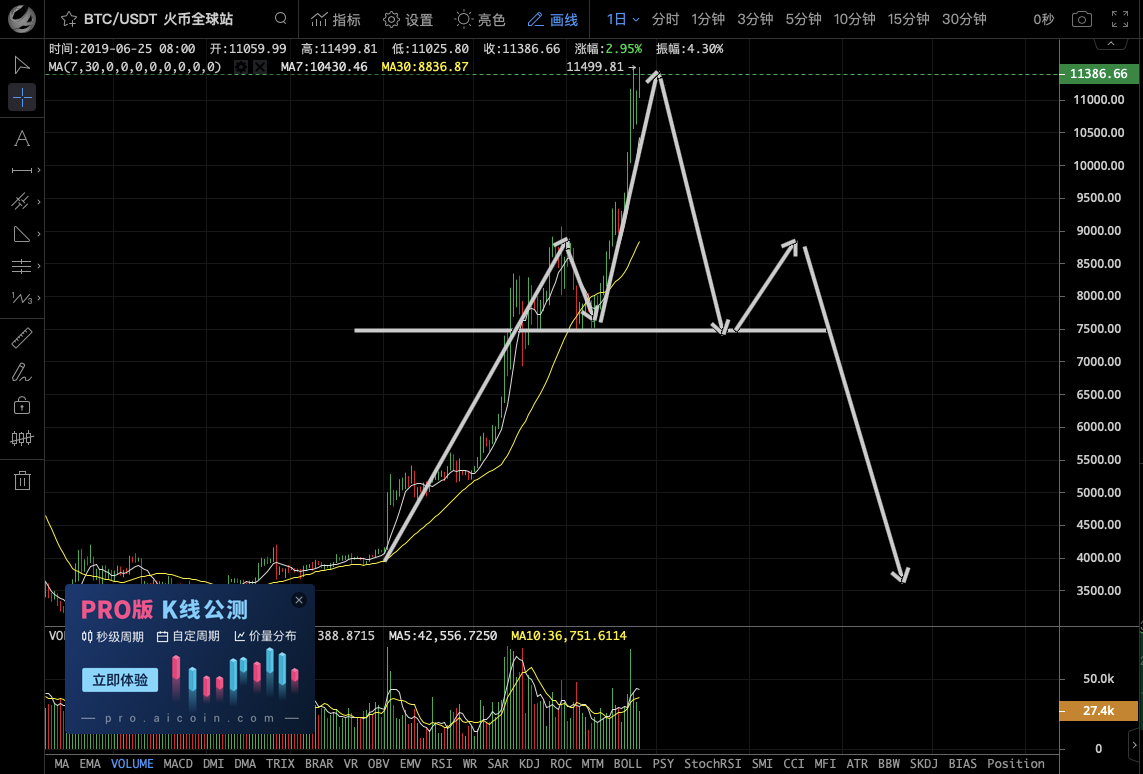 Let's take a look at the "head and shoulders" mechanism to assist in the follow-up explanation:

The head and shoulders top form has four criteria:

B. Another wave of stocks with high volume has risen and reached a level higher than the top of the left shoulder. The subsequent callback (with shrinking volume) brings the price price to the bottom of the previous short-term correction, which may be slightly higher. At or slightly below this bottom, but in any case lower than the top of the left shoulder. This stage is called the "head."

C. The third wave of price increases, but the volume is significantly lower than the previous left shoulder and head volume, and the stock price begins to fall before reaching the apex of the head. This stage is called the "right shoulder."

D. Finally, the third wave of decline appeared, the price fell below the neckline (ie a line connecting the low point between the left shoulder and the head, the low point between the head and the right shoulder), and continued to explore about 3 %. This phase is called "confirmation" or "breakthrough." Pay attention to the public number: gikee01, master more investment skills.

This is an important feature of the structure of the head and shoulders. Let's take a look at the current trend of Bitcoin. The shape of the left shoulder is similar to that described in the description, and the current "head" shape is also obvious. The most important thing is that several times the impact of the $11,500 intensive chips are all weak and weak, which further supports this conclusion.

Therefore, from the morphological point of view, the neck is around 7,000 US dollars, and the head is at 12,000 US dollars. If there is a large retracement at this point, the shape will become obvious, almost copying the structure of the head and shoulders.

Another reason is the Bitcoin NVT signal, which is determined by the price-to-earnings ratio of a stock.

The traditional P/E ratio refers to the ratio of stock price per share to earnings per share. The earnings per share represent the company's basic benefits. Although Bitcoin is not a company, since Bitcoin is a value network for payment and storage, the total value of transactions flowing through the network actually represents the practical value that users get from the chain. We can see that the network value of Bitcoin is closely related to the funds flowing through its blockchain. Therefore, NVT is defined as follows: NVT = Bitcoin's network value / daily transaction value In the history of Bitcoin, there has never been an NVT failure. This does not mean that it will not fail. This just means that it has a good track so far. So, I am very cautious now, I think we may be ending this move. But again, Bitcoin needs to quickly break through the current range. Pay attention to the public number: gikee01, get more investment skills.