On April 6, 2019, the Central University of Finance and Economics consensus economics team jointly launched the world's first blockchain manager index, the BMI (BlockchainManager Index), and the supporting index system. In March, the BMI was 62.7, which was significantly higher than the glory line, indicating that the blockchain industry as a whole is improving.

Since the publication of the White Paper on Consensus Economics: Discovering Entropy Assets in 2018, the Central University of Finance and Economics Consensus Economics Group has gradually shifted its focus to the construction of industry credibility and economic fundamentals. After three months of research and development, the BMI index model was produced. The interchain pulse is responsible for the operation and maintenance of the index.

Dr. Chen Bo, head of the Consensus Economics Group of the Central University of Finance and Economics, introduced the Blockchain Manager Index (BMI) in conjunction with the Mutual Chain Pulse. The original intention is two: First, provide a development for the industry. Consensus indicators with economic significance fill the gaps in the industry infrastructure; second, gather a group of outstanding employees to let their consensus drive the progress of the industry.

The Manager Index is a long-standing research-based indicator that is designed to quantify the expectations of professionals into indicators. This indicator has a good lead and can reflect the changing trend of the market in advance. As a consensus machine, blockchain has emerged as a fragmentation feature, so building a consensus index for “people” has a directive effect on the healthy development and integration of the industry.

The blockchain manager survey questionnaire has 10 questions. The series index includes 2 core indexes and 2 diffusion indexes. The core index includes the Blockchain Manager Index (BMI) and the Consensus Differences Index (CDI). BMI is used to reflect the expansion or contraction expectations of the entire industry, above 50 indicates that the industry is expanding, and vice versa indicates that the industry is contracting. The CDI index is used to reflect the stability of the BMI index, that is, the consensus difference between different types of practitioners in the blockchain industry for industry development. The Diffusion Index includes the Business Expansion Index (BEI) and the Digital-asset Value Index (DVI), which are used to reflect the business expansion trend of the blockchain industry and the fluctuation of the value of digital assets. 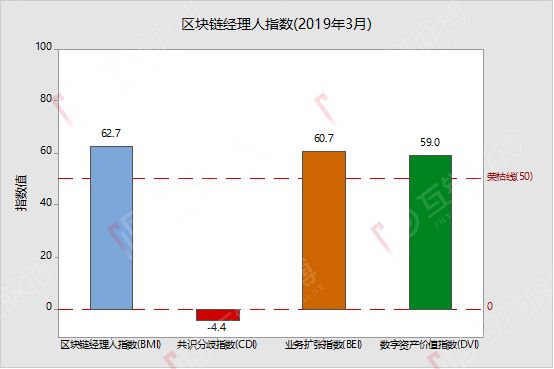 In March 2019, the blockchain manager index (BMI) was 62.7, which was higher than the glory line, indicating that the industry as a whole is improving.

The Consensus Divergence Index (CDI) is -4.4. Negative values ​​indicate that blockchain companies (Class A) have slightly higher confidence than investment service institutions (Class B), compared to blockchain companies and other blockchain industry participants. The operation encountered more resistance, but the industry as a whole still showed a steady development trend.

The Digital Asset Price Index (DVI) reached 60.7, which is also higher than the line of glory. Combined with the steadily rising trend of mainstream cryptocurrencies such as BTC and LTC last month, industry confidence has recovered in March after a large shock, and the activity level of the project has increased.

The BMI index has a strong lead, slightly higher than the DVI and BEI indices, indicating that the blockchain industry is expected to continue to expand steadily in the coming month.

The problem setting refers to the traditional purchasing managers index questionnaire and fully considers the particularity of the blockchain industry. For example, digital assets are the unique asset types of the blockchain, and most of the projects are still in the initial stage, with large fluctuations and close relationship with the investment environment. This is a characteristic that is not available in the traditional industry, so some indicators have been selected to reflect the above characteristics.

The research questions are as follows:

1. During the reporting period, the number of active users of the blockchain projects you are interested in or increased from the previous month/substantially unchanged/decreased?

2. During the reporting period, the amount of digital asset transactions in the blockchain projects that you are interested in or increased from the previous month increased/substantially unchanged/decreased?

3. During the reporting period, the price of digital assets of blockchain projects that you are interested in or increased from last month increased/substantially unchanged/decreased?

4. During the reporting period, the financing difficulty of the enterprises/projects you are interested in is increasing/substantially unchanged/decreased from the previous month?

5. During the reporting period, the number of new customers/businesses you are interested in or increased/substantially changed/decreased from last month?

6. During the reporting period, the R&D investment of the enterprises/projects you are interested in (including the total salary of technicians and other R&D investment) increased/substantially changed/decreased from last month?

7. During the reporting period, the number of employees/businesses in your company or project increased/maintained/decreased from last month?

8. During the reporting period, the business income of the company/project you are interested in or increased from the previous month/substantially unchanged/decreased?

9. During the reporting period, the difficulty of completing your performance has increased/maintained/decreased from last month?

10. During the reporting period, do you expect the business volume in the next month to increase/substantially change/decrease compared to this month?

Under each question, the percentages of the three answers “increase”, “basic change” and “decrease” are calculated separately. Each sample has the same weight.

Among them, the “financial environment” and “performance completion” indicators are reverse indicators.

The Blockchain Manager Index (BMI) is weighted by five indices: new customers, R&D investment, number of employees, business income and financing environment. Each index is given the following weights: 30% for new customers; 25% for R&D; 20% for employees; 15% for business; 10% for financing. If the index is greater than 50, it indicates that the blockchain industry is expanding; on the contrary, the industry is contracting. The gap between the index and 50 measures the speed of industry expansion and recession.

The Consensus Differences Index (CDI) is designed to reflect the perceived differences in the operating conditions of different types of blockchain practitioners. In calculating this index, the indicator used is the five indicators for calculating the blockchain manager index, and the weight assignment situation is consistent with the calculation of the blockchain manager index. The collected questionnaires are divided into two categories: “blockchain enterprises (group A)” and “other (group B)” according to the nature of the institution in which they are filled. Other categories include investment institutions, media/training/consulting services, and districts. Blockchain exchanges, rating/research institutions, etc. The formula for calculating the index is as follows:

Among them, A and B represent the group, where B is the reference group; j represents the sample in the group, in which group A has n samples, group B has m; i refers to the i-th index collected by the questionnaire; k is the indicator the weight of.

When calculating the Business Expansion Index (BEI), use the equal weighted average of the two indicators of “performance completion” and “business activity expectation”. This index combines the two dimensions of lead and lag to measure the business expansion of the blockchain industry.

When calculating the Digital-asset Value Index (DVI), use the equal weighted average of the “number of users”, “transaction amount” and “asset value” to reflect the blockchain user activity and Changes in the value of the chain.

Poetry and the distance are…

Offline can also record transactions, Mesh network is expected to become the ultimate "killer" for cryptocurrency

Bitcoin plummeted, where did the money go?