Recently, the news about PlusToken running the road crash is very rampant. This fund project started in April last year. After raising funds of 10 billion yuan, there was news that users could not withdraw coins, the founders were arrested overseas, and the team ran. Now, investors can't get back this. There is no way for gold and rights.

On July 1st, 31QU started from the birth of PlusToken, and then to the end of the process, please check the "Plus token: 20 billion, can not get out of the blockchain? How much money is in the blockchain?" 》

Almost at the same time, another news report called the wave field super community was reported. According to incomplete statistics, the number of frauds reached several billion, and the number of victims exceeded several hundred thousand. Overnight, the project was on the account. The cryptocurrency worth 3 billion is transferred to a different account.

In fact, with the cryptographic currency banner, the MLM/Funding project is not the only one. By combing, 31QU found that after the PlusToken crash, there are at least dozens of imitation projects, CloudToken, MGCToken, WoToken, WorldToken, UOBToken, MAX token, BossToken, and many resonance projects are still on the way to shouting people.

Similar to the PlusToken gameplay, the project, called CloudToken, claims to be the world's first social wealth wallet to consolidate all blockchain cryptographic assets into one platform.

According to the official introduction, "It uses the latest 4.0 blockchain platform technology development, can carry out cross-chain encryption exchange and payment for the famous encryption market AI arbitrage engine, the goal is to provide members with a focused social wealth generation ecosystem. And become the de facto standard token in the blockchain industry, and the positioning is grand.

It is understood that this project, which began in January this year, is also driven by the arbitrage of arbitrage and arbitrage. It attracts users with a level of repatriation mode of up to 21 generations. It claims to use the method of quantitatively moving bricks and intelligent frying bands to invest capital. In general, you can get 6%-12% of the monthly income, and the currency produced is the platform currency CTO."

In addition, “storing the platform currency can get 0.6% of the revenue and is not subject to fluctuations in the secondary market.” At the same time, CloudToken cloud wallet also introduces various methods, including currency consolidation, mining pool, etc., to attract users. The cryptocurrency is saved to the wallet. 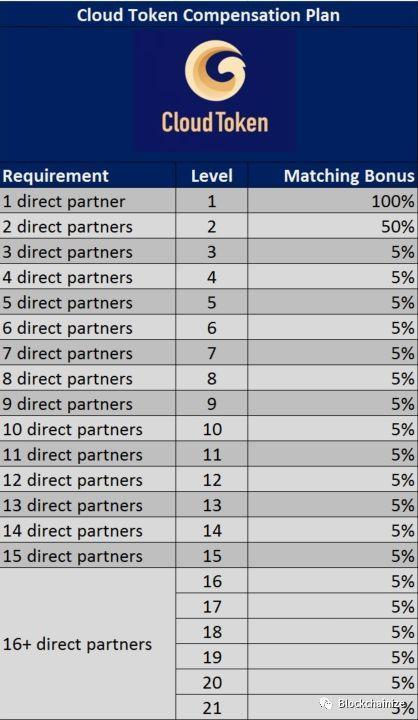 Up to 21 levels of user rebate mode

Words similar to PlusToken are also used on the MGC Token.

The wallet claims to be “doing digital asset balance treasure” and has a key-to-host smart brick arbitrage function, claiming monthly income of around 9% to 25%, which can be re-invested. According to the promotion information, the project has an infinite-level rebate mode. “Promotion of one person takes 1 generation and direct sales of 100%, takes 2-10 generations of income by 10%, and takes 11-20 generations of income by 1%; five levels, unlimited Generation 7%-16%, the highest level can even take 8% global weighted dividends."

In addition to MGC Token, there is another project called WoToken, which is also known as creating a “digital asset wallet that can manage money”. The official propaganda said that it will use the lock-free, high-frequency intelligent quantitative trading to shut down freely and withdraw coins at any time. It has the characteristics of safe deposits and currency appreciation.

A similar routine is also reflected in the WoToken. According to reports, the Apollo intelligent robot is also opened in the wallet. Users can open the Apollo intelligent robot with any digital currency in the wallet to obtain high-frequency quantitative trading income. Among them, Wo Token Apollo I (digital asset 1000$- 4999$), monthly income of 6%-15%; Wo Token Apollo II (digital assets greater than 5000$), monthly income between 10%-20%.

It is worth noting that there is another wallet project with a similar name, and the Apollo intelligent robot is also built in.

According to reports, the world Token digital currency wallet, known as a wallet to open the digital currency and the physical world, using the Apollo intelligent robot in the wallet, also obtain high-frequency quantitative trading income.

In addition, WORLD claims to work with banks, issuers (Visa, Master, etc.) and their agencies to issue digital currency bank cards. Users can apply for virtual or physical bank cards online through World, use any digital currency to recharge their bank cards, and can use online and offline consumption and ATM withdrawals at tens of millions of bank card acceptance sites around the world.

In addition, the official also expects a UOB, which will reach $80, and the intention to attract people to the market is obvious.

5, MAX token and Boss Token and other similar projects

The MAX token mode, also using a similar gameplay, is free to enter and exit, but charges a 0.01 ETH fee; users can start smart rabbit smart bricks with a minimum of $350 in market value, and the proceeds will arrive on the same day. The intelligent brick removal was closed within 30 days, and the 8% of the bricks were deducted as a fee subsidy mechanism, which stipulated that the platform used 50% of the transaction profit to recover the platform currency.

In addition to the above projects, projects using similar gameplay basically adopt the same routine.

In addition to a wide variety of wallet projects, there are many controversial resonance projects, including VDS.

In February of this year, a resonance project called VDS was launched. In just two months, it created a myth of nearly a hundred times of increase, attracting many speculators to enter the market and making the resonance mode hot in the currency.

Resonance mode means that the project has a double wallet design. As long as the user imports or registers the wallet, it can synchronously generate a wallet of the currency. The user can exchange BTC (or other tokens) in the wallet into a platform. Tokens, platform tokens can receive a certain dividend according to the supply on the market. This one-way exchange process is called “resonance”.

For example, in a VDS project, users can convert Bitcoin into a VDS in one direction, and the number of VDSs obtained is determined by the Resonance V pool.

In addition to copying VDS's resonant gameplay, some of the imitated projects have added user fission gameplay, such as setting up community dividends and rewards mode, FDS adds “believers”, “fissioners” and “lucky”, HDS The "leaders", "evangelists", "rich people" and other identities are set up, in order to maximize the number of people involved in the hiring, get rebates and so on.

In fact, whether it is a cryptocurrency wallet project with quantitative hedges, high-frequency trading flags, or a resonance project with currency dividends, it is a "castle in the air". The more the early rise, the more it will fall.

For the user, early participation may yield huge profits. Once the plate is too large, the system can't keep running. The final outcome can only be the core team running.

The collapse of PlusToken only opened the tip of the iceberg in the cryptocurrency sector, and more funds/MLM projects continue, but how long will this dangerous game last?

Li Lin: Except for companies controlled by shares, he does not hold shares in third-party companies