Recently, the news of the skyrocketing of SHE, BRC and other currencies has been swiping in the currency circle. With the increase of several times or even tens of times, these small-currency types that have long been on the verge of breaking the edge have re-entered the public.

Previously, the IEO snapped up the wave to live in the secondary market of stagnant water. Under its impetus, the market has seen a new currency that has risen 10 times and 20 times in the market, winning the attention of investors. Nowadays, this “gold rush” seems to have spread to some small projects that have been quiet for a long time. With the “pyramid” type of investment return mode, many investors who see Token's appreciation expectations are swarming.

For such a resurrected "zombie coin", the outside world has developed a unified name: model currency. Although the investment rebate model is different, the essence is that the project party formulates corresponding rules to allow the money-bearing users to obtain additional income, thereby attracting more investors to enter the market and raise the price of the currency.

The above model has been questioned by industry insiders. “The return of the currency itself does not create value. Those investors who participate later will become the biggest victims. After the retail investors leave the project, the project should be finished.”

The currency circle is now up 30 times in a single month.

In the early morning of April 9, SHE quoted 0.26 yuan, which was about 50 times higher than the lowest point in March.

The amazing increase has aroused the attention of the outside world. Observing the price trend of SHE, it is found that this project, which claims to build a global blockchain safe and healthy mutual aid ecosystem, has increased by 290% in the past seven days, 4223% in 30 days, and the market has increased by about 50 times.

Non-small data shows that SHE fell all the way after landing on the fire currency network in March last year. The price of the coin fell from the high point of 0.19 yuan to about 0.005 yuan at the beginning of March this year, a drop of 98%. Now that the currency price has reached a market high of 0.26 yuan, the outside world has begun to explore the sources of funding behind its rise.

Some users who participated in the purchase and promotion of SHE told Honeycomb Finance, "The rise in the price of the currency is not the progress of the project in the commercial landing, but Jin Hui (SHE founder) is using the price dividend to pollen and drain." The means is somewhat similar to the new hottest IEO, the former is the platform to obtain customers by selling low-priced new coins, the latter is the old money through the "rebate" mode.

In addition to SHE, there are many similar currencies in the currency circle. They have successfully ignited the investment enthusiasm of the market with the “pyramid” type of investment return mode and amazing increase. For such projects, the outside world has developed a unified name: model currency.

A "model currency increase list" circulating on the Internet shows that the ten "model coins" on the list are now trading between 196% and 3660% from their historical lows. On the left side of the list, the patterns that these projects are adopting today are listed, including “reporting game discs” and “wallet promotion fission”. 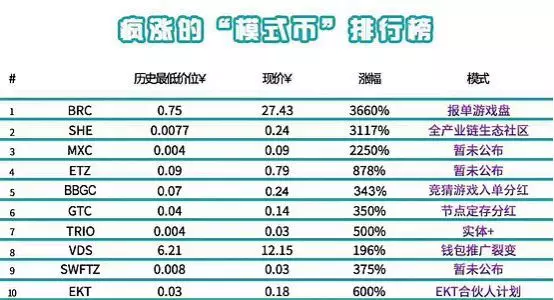 The source and meaning of the term “model currency” is not explained in the form, but the amazing increase is behind enough. In social media, discussions about the “next list of coins” are ongoing from time to time.

Investors who have been taught by the market choose to "disregard." Yun Shuguang (net name) bought some IHT for 12,000 yuan at the beginning of last year and sold it for more than 100 yuan at the beginning of this year. He said: "This coin has fallen more than 99%. Now it is a heavyweight EOS. It depends on the mainstream currency, and the investment model currency should be cautious and too pitted."

Some analysts believe that the so-called model currency is the project party through the formulation of the corresponding rules, allowing the currency users to obtain additional income, thereby using the project's appreciation expectations to attract more people into the market, and raise the price of the currency. “Although the rebate model is different, the essence is a 'pyramid' type of investment.”

"Model" itself does not create value

Previously, the IEO snapped up the wave to live in the secondary market of stagnant water. Under its impetus, the market has seen a new currency that has risen 10 times and 20 times in the market, winning the attention of investors. Today, this “gold rush” seems to have spread to some small projects that have been silent for a long time.

The modes of each mode currency are different. For example, BRC is “reporting game mode”, SHE is “all-industry eco-community mode”, GTC is “node dividend mode”, and ETK is “partnership mode”. Since most of the model currency is a currency with a small market capitalization, it is often easier to achieve a substantial increase, so that many investors who see Token appreciation expectations are swarming.

SHE community users told Honeycomb Finance, the community recently officially launched the "Global Venture Capital" model. According to official data, the plan is an investment mode in which the flash chain is set for users to preserve and increase value. According to the user's holding time, the longer the amount, the more the income can be obtained. “The rebate is settled by SHE and encourages users to keep investing.”

The above users indicated that the specific operation process is that the investor purchases SHE from the exchange, recharges to the project side's venture capital platform, and returns 10 days. After settlement, the user can withdraw coins to the secondary market at any time, or choose to continue to re-invest. “If you want to withdraw coins in less than 10 days, you will need to pay a 5% fee. However, the handling fee for raising coins in advance is high, and to some extent, it prevents capital outflows.”

In addition to regular rebates, investors can also participate in the process of attracting people and managing lower-level investors. The model currency looks like a fund disk on the surface, and now it is relying on rebates and pulling people to gather funds. However, unlike the MLM and Financing Plates, these currencies can be traded normally in the secondary market. Some currencies can be purchased at major exchanges such as currency security and fire coins. This seems to have given investors a "reassuring".

Some insiders questioned that “the return of the currency itself does not create value, and those investors who participate later will become the biggest victims. After the retail investors leave the project, the project will be finished.”

A blockchain practitioner who did not want to be named told the Honeycomb Finance that the short-term market was sluggish. Many rebounds and actives were passive waters, and the speculation was still the funds in the circle. “Investors often make a profit and leave without supervision. Over time, retail investors can’t make money, investment institutions don’t invest, and the project itself has no income, and it is naturally eliminated by the market.”