According to relevant media reports, since the evening of June 27th, the Plustoken wallet of the "first fund of the currency circle" has been unable to withdraw cash. Soon the major media have followed up to report the matter, according to the current user scale of the coin. The collapse of the $30 billion fund project is a foregone conclusion.

Surprisingly, in the three days after the crash, most of the investors in the Plustoken community not only did not choose to call the police and defend their rights, but spontaneously formed the water army, captured the major rights groups and washed the Plustoken.

In fact, on the night of the news, the BlockBeats editorial department began to think about a problem. If an article caused a 30 billion fund transfer project to collapse, let the relevant personnel of the project party be arrested and let the latter join. If the investors who have not recovered the cost are not worth the money, is this a good thing or a bad thing?

Investors don't let the alarm, the fund is in a silent spiral

"Plustoken didn't run, it was written by your media, and it didn't crash."

Wang Lin started investing in Plustoken last year. Although he has already taken out the principal and some of the proceeds, he still had about $200,000 in bitcoin on June 30.

The speed of the Plustoken crash made Wang Lin very surprised. He told the block to block BlockBeats, the Plustoken crash has two main reasons, one is that bitcoin has risen recently, and the price was close to $14,000. Bitcoin's day-to-day gains are close to the 15% monthly rate of return that Plustoken claims, so many investors are starting to cash in on bitcoin, and if Bitcoin doesn't rise so fast, it won't collapse so quickly.

Another reason is that from February of this year, there have been reports from the media that Plustoken is a pyramid scheme and a fund. In June, the media began to gather news that the Plustoken was about to collapse, which directly caused a large panic. But soon the big players in the Plustoken community spontaneously formed the water army and captured almost all the rights groups. They washed the Plustoken in each group, and whenever someone questioned the project model, they immediately sneaked. The investor said that the people around him who believed that Plustoken was going to run soon after the pyramid scheme would soon be silent again.

At the end of June, this time the media reported that Plustoken was again reported. Numerous water forces spontaneously organized themselves, but this time the water army failed to stop the collapse of Plustoken.

Another investor who earned $120,000 on Plustoken told the block to block BlockBeats. On June 28th she successfully cashed in 120,000 yuan of bitcoin, but No. 29 could not be cashed. Recently, she was very excited about the few downlines that she pulled in. She was afraid to go to the police to make troubles on the line. On June 30, she had already compensated several downline lines of 80,000 yuan.

She also said that the water army's mood of washing the land in the group is very complicated, but mainly because of two considerations. First, as long as there is no collapse in the project, they can continue to earn a day. Second, if the sudden collapse of the project has attracted social attention and police investigations, the online may have to vomit the money earned from the downline, the amount is huge and even the risk of jail, will put themselves in.

The most striking feature of Plustoken is that it claims to achieve a monthly return of 15%-20% and attracts millions of users through a ten-tier rebate-based promotion model. This phenomenon in the Plustoken community can be said to be the typical Spiral Of Silence , a theory of political science and mass communication, that is, in order to avoid being isolated, when people think they belong to the disadvantages of the group, Often, silence is chosen; the silence of one side of the opinion leads to the increase of the opinions of the other side. Such a cycle will form a spiral development process in which one party's voice becomes stronger and stronger, and the other party becomes more and more silent.

This situation abounds in real life. For example, in a company, employees find that they tend to remain silent without speaking when they hold a violation of leadership, mainstream opinion, or possible attack.

In the Plustoken community, block rhythm BlockBeats saw the silent spiral phenomenon evolved to the extreme. Appeal Li surnamed investors also told the block to block BlockBeats. Only those who have not paid out the principal will be really anxious. Most of the people who have paid the principal will spontaneously form the water army and form a favorable community paradox for Plustoken. Community sentiment. At this time, the person who did not come out of the principal can only believe that Plustoken will not collapse and continue to pull new. Wang Qiang only started to vote for Plustoken in the last ten days. Before investing money, he saw a lot of negative news about Plustoken on the Internet, but he felt that the Plustoken started in April last year had a one-year security period. With so many people participating, it is safe at this stage.

Until June 27th, the Internet began to spread the news of Plustoken running. The mainstream media such as Caijing.com also reported the incident. He tried to withdraw the cash on the 28th, but it has been showing that it has been audited so far. But seeing a screenshot of someone in the community who made a successful withdrawal, he was a little relieved.

In the early morning of June 29, Wang Qiang often sent a circle of friends about Plustoken. He told block block BeatBeats that one can pull one, and maybe it will be resumed in a few days. 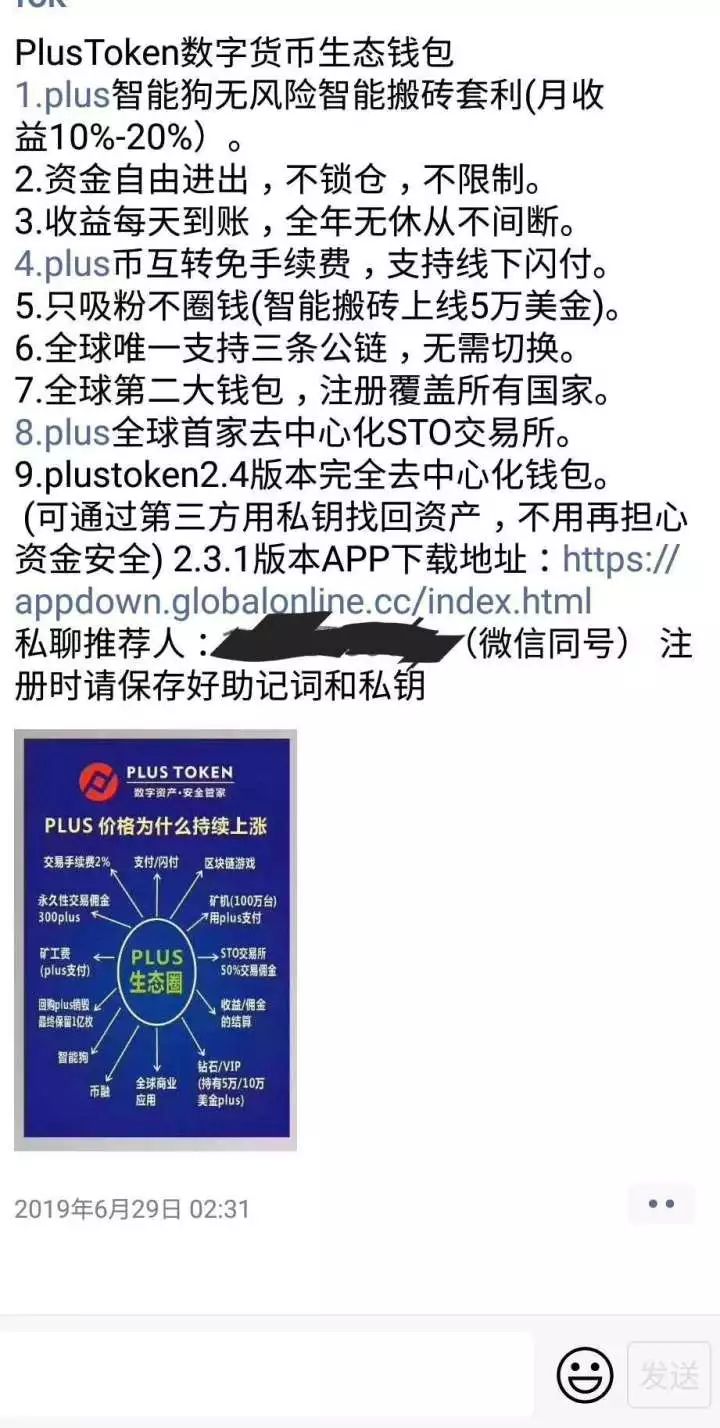 "Plustoken won't run, there are things that are stable, and investment is risky." Wang Qiang can only comfort himself and dare not accept the fact of the crash. Since he has already invested 500,000 yuan, the huge sunk cost has forced him to continue to believe in this project. On June 28, when the news of six Chinese suspected of the Plus Token founding team was arrested overseas, Wang Qiang also actively clarified that the news was false in the community.

In fact, the use of investors' "sinking cost" mentality is an important reason for the pyramid schemes and the long-term success of funds. Many fraud projects have not been innovative for many years, but they have tried and tested. The core support theory is "sinking costs."

The scammers initially let investors take some small money, taste the sweetness, and then induce more and more investment. Even if the investors have the idea of ​​withdrawing from the back, the money invested in the previous investment may not come back or fail to meet their expectations. So I had to hold my luck and get deeper and deeper.

If you bought a movie ticket for $7, you wonder if the movie is worth $7. After watching it for half an hour, your most worrying thing was confirmed: the film is terrible. Should you leave the theater? You should ignore the $7 when making this decision. It is a sunk cost, no matter whether you leave the theater or not, the money will not be recovered.

In the Plustoken community, BlockBeats has seen too many people like Wang Qiang who have been dragged down by “sinking costs”. I can't believe that the project has collapsed, dare to defend rights and alarms, and even continue to pull new users. Fantasy, this project can also be "resurrected", and you can earn money and quit successfully.

Why is the MLM fund not dead?

"There are only two economic activities in human history: producing and creating wealth, transferring and distributing wealth."

In November 2018, when Zhou Hao, who had been in the currency for many years, first came into contact with Plustoken, he realized that it was a fraudulent fund. Every time he pulls a line, he will tell them clearly that this is the fund, and the principal must be promptly withdrawn, and it must not be re-invested. He is quite proud to say that the followers who follow him to play Plustoken have basically paid the principal, and those who lose money are those who have not listened to him and re-invested.

"Chaos is not an abyss, chaos is a ladder." Zhou Wei likes the classic lines in "Game of Thrones." In his view, every huge fund is often accompanied by countless investments, but it will not let you go. A few people succeeded in making a profit. These ordinary people have few opportunities in the wealth wave of real estate, financial bubble, and money release, but the fund is a casino-like place to turn over, losing nothing more than a year's salary. 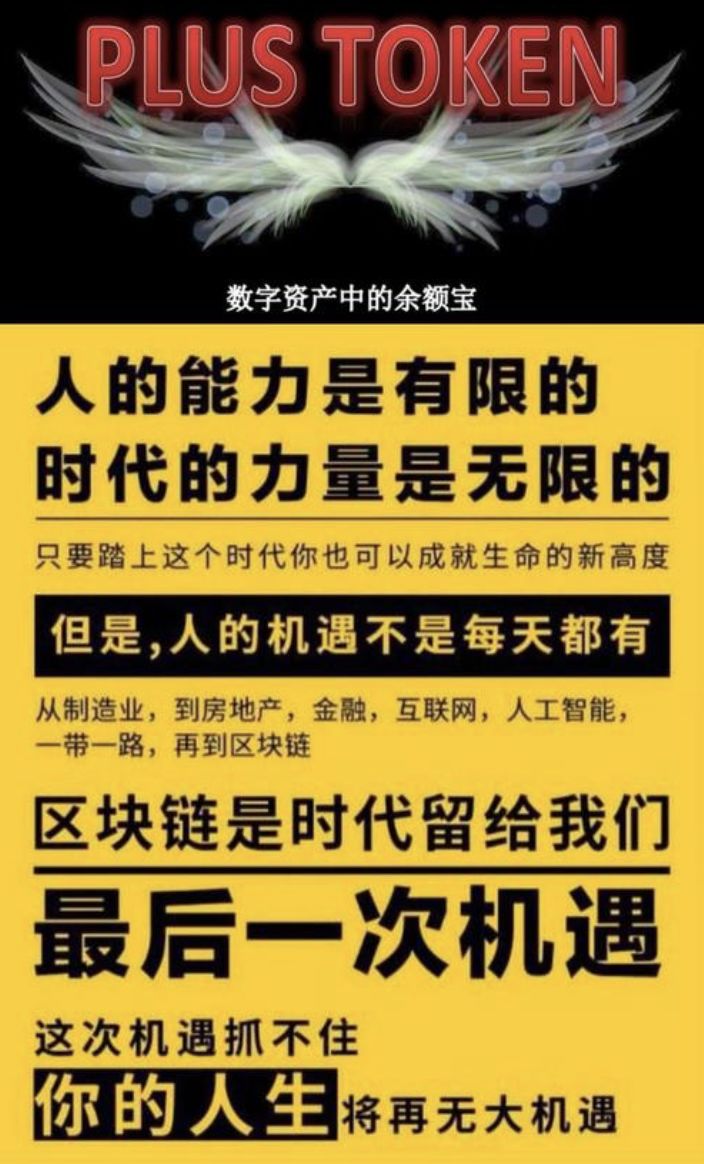 Zhou Wei told block block BeatBeats that the fund disk is difficult to eliminate from the root cause, because people have a greedy nature, and in reality, as long as there is an unfair distribution of wealth, the fund disk will always have a breeding ground. A Plustoken will fall and more funds will be on the road.

According to blockchain media statistics, after the collapse of PlusToken, there are at least dozens of imitation projects, CloudToken, MGCToken, WoToken, WorldToken, UOBToken, MAX token, BossToken, and many resonance projects, still shouting On the way.

BlockBeats believes that today's cryptocurrency funds are characterized by cross-border, high-hidden, point-to-point transfer payments, and open and transparent links. Some funds have also joined the smart contract, which solves the core problem of the “trust crisis” in the traditional Ponzi scheme and fund project. For the supervision, how to combat the cryptocurrency fund is also a difficult problem. For investors, you should be wary of all kinds of funds and cryptocurrencies combined projects, optimistic about their wallets.

As of the night before the press release, there were investors who asked the block to beat BlockBeats.

"If everything is ok, will you take all the coins away?"

"Why do you have to take it away? If you don't take it, the wallet won't be cold, so how good it is."

(The names in the text are all pseudonyms)

This article was first published in Tencent Technology and is not allowed to be reproduced without permission.

The author of this article block rhythm 0x30

The data shows that Bitcoin has a callback and the bulls have successfully held the support.

Changelly CEO: If Ripple can IPO, Ripple Labs and XRP will benefit