At the beginning of 2019, after the restart of the currency, Launchpad, the IEO model followed the STO and once again set off the market. In March, exchanges such as Firecoin and OKEx were launched on the IEO model. In the first quarter of 2019, IEO, ICO, and STO gradually became three pillars.

With the end of the second quarter, more than half of 2019, the situation of the cryptocurrency market has also undergone new changes.

The interchain pulse has been counting ICO financing since April 2018. And with the shrinking ICO financing scale, and the popularity of more new token distribution methods. In order to better match the changes in the financing market, the chain of interlinkage began in April 2019, based on the statistical ICO, analyzed the financing situation of IEO and STO, and summarized the data of the three methods into the total amount. 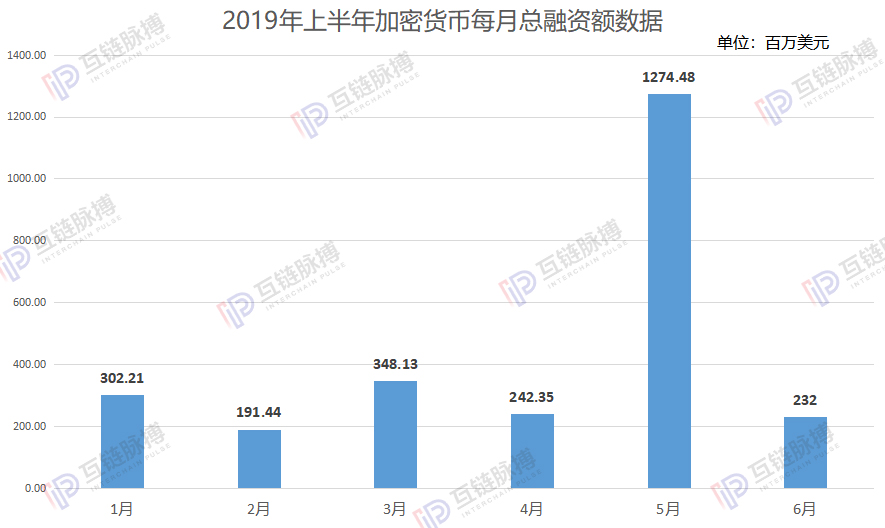 From the perspective of financing amount, the financing of cryptocurrency. In the first half of 2019, the total financing of the three financing methods was US$2.59 billion. The sharp increase in data in May was due to Bitfinex's $1 billion IEO project LEO, which was used as a working capital for the US government to freeze $850 million.

If the special item of Bitfinex in May is excluded, the financing situation of cryptocurrency in the first half of 2019 will basically show a steady development trend, with a monthly average of 265 million US dollars. However, the total amount of financing in June fell slightly, compared with the May data (excluding Bitfinex), which fell 15.47%.

The financing of cryptocurrency is viewed from the perspective of the amount of financing. Mutual chain pulse observation Inwara analysis data, mentioned in the report released at the end of May, there were 583 blockchain financing projects in the first half of 2019, of which 69% belonged to ICO; 21% belonged to IEO; 10% belonged STO.

Number of ICO, IEO, STO financing in various countries in the first half of 2019 The same is Inwara's report data, ranking the various financing areas by the number of ICO, IEO, and STO financing in the first half of 2019.

Among them, transactions and investments (including encrypted exchanges and related services), financial services (payment solutions and other) areas have the largest number of cryptocurrency financing, with 66 and 47 projects respectively. The blockchain and digital currency sectors are close behind. It is worth noting that the gaming, medical and energy industries are accelerating. In terms of financing amount, the transaction and investment sectors also accounted for the largest proportion, accounting for 37% of the total financing.

All in all, the cryptocurrency financing in the first half of 2019 showed a steady development trend. The countries with the leading development are the United States, China and Singapore; the leading areas of financing are trading and investment.

Financing trend in the first half of the year: IEO is higher STO is ahead of ICO

After the overall statistics on the financing of cryptocurrencies, the inter-chain pulse further analyzed the financing situation of IEO, ICO and STO. 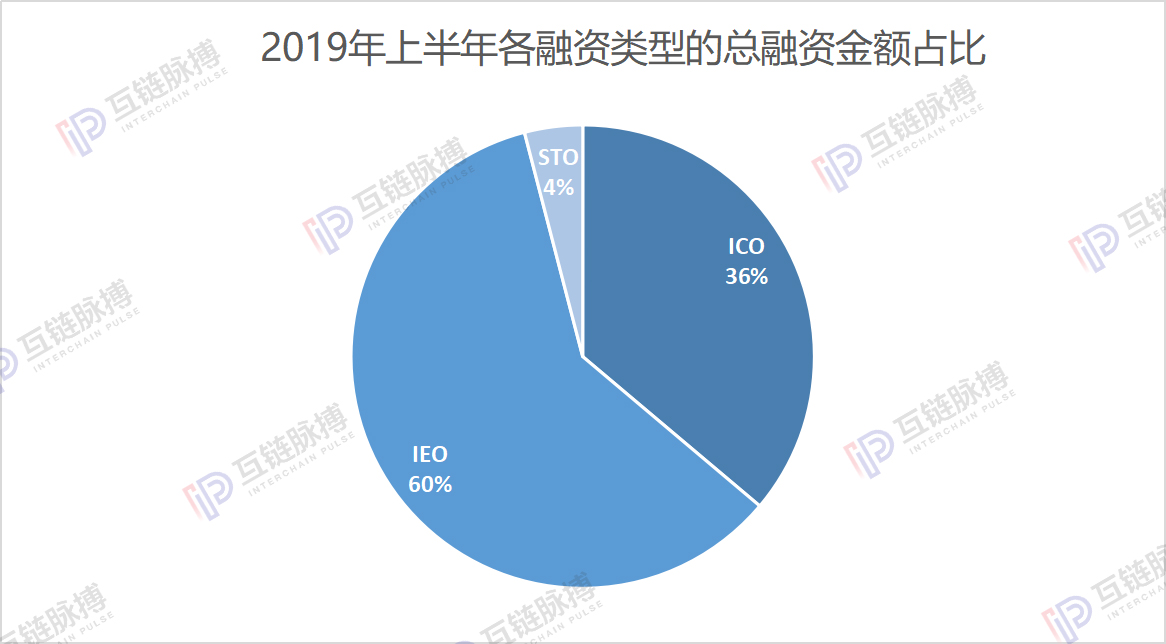 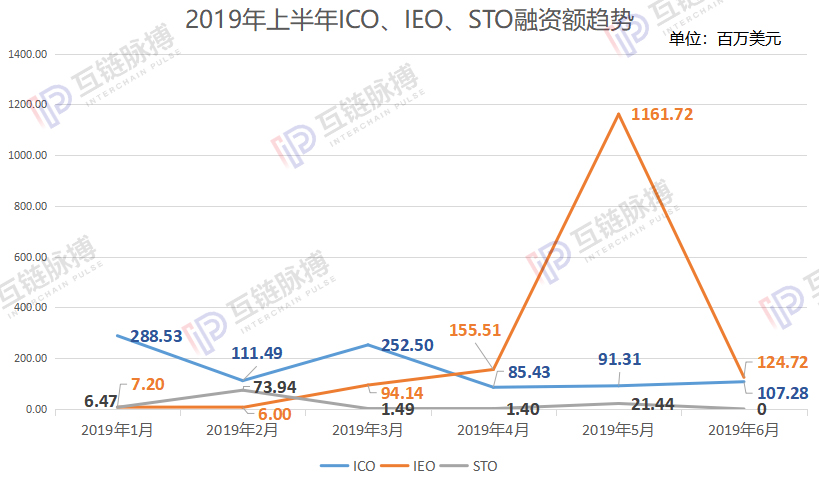 Further statistics on the monthly financing amount of IEO, ICO, and STO can be seen in their respective first half of the year. Before May 2019, IEO's financing data continued to rise, but declined slightly in June. Although excluding the $1 billion of special items in May (Bitfinex), the amount of IEO financing in June fell by 22.87%.

The ICO showed a downward trend as a whole, but the data was repeated. The amount of financing in June 2019 ($107 million) increased by 17.48% from the previous month ($91 million). STO's financing scale is always small, the amount of data is low, and there is a certain rebound in February and May. Even according to the Coin Schedule data, STO's June financing amount is zero.

The rise of IEO, the decline of ICO, and the demise of STO depend on the choice of financing methods for each project.

Mutual chain pulse observation The top ten projects with the largest amount of cryptocurrency financing in the first half of 2019, of which 5 were carried out by ICO, 4 by IEO, and only 1 by STO.

Not only in the top ten projects of financing, from the overall financing situation in the first half of 2019, the IEO project also has more funds than the ICO project. 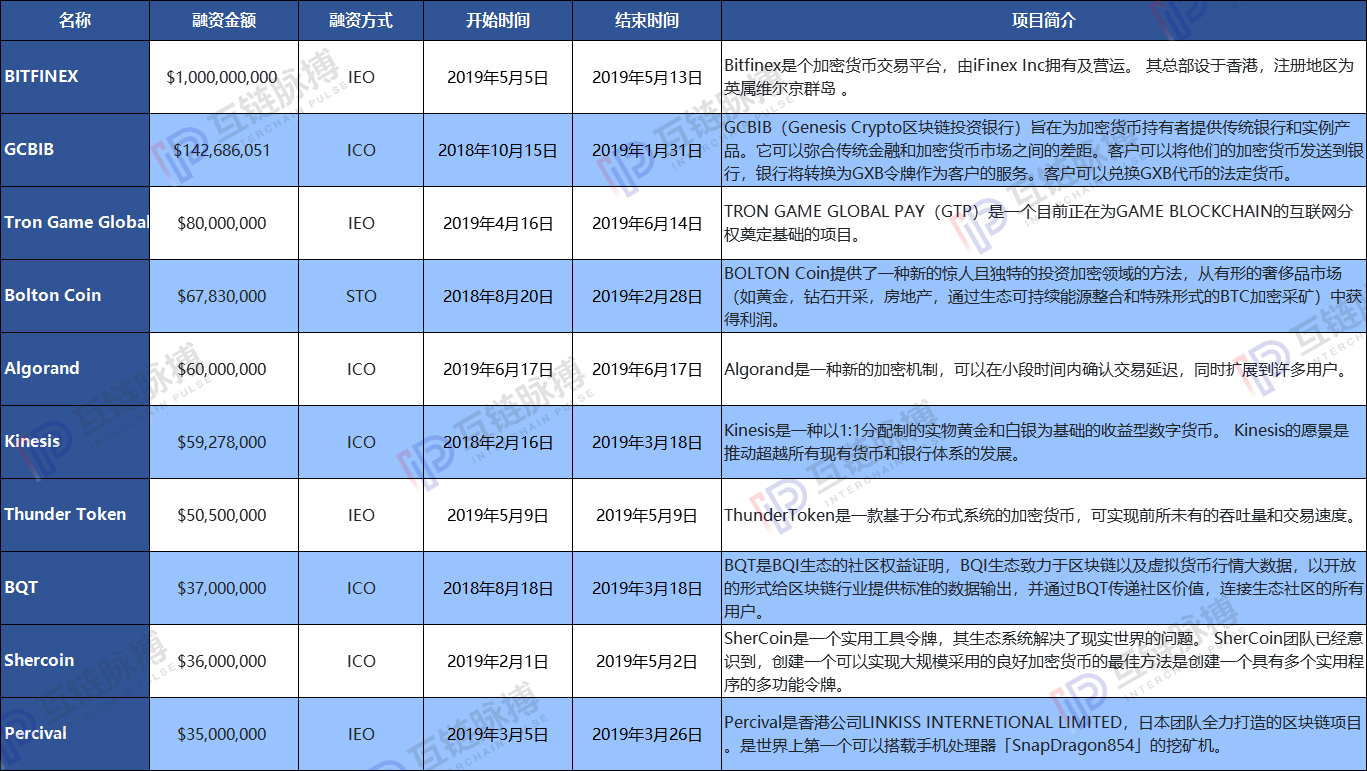 Among the top ten projects in the first half of the year, the first one was the cryptocurrency exchange Bitfinex, which announced the official white paper of the IEO project LEO on May 8. And in the white paper, it said that the background of the launch of the IEO is that Bitfinex urgently needs a working capital during the period when the US government has frozen $850 million. According to the white paper, the total number of LEOs issued is 1 billion. Unlike other cryptocurrency exchanges that use their own platform currency as a medium to raise their own platform currency to carry out IEO for each project, Bitfinex raises USDT.

Ranked second is GCBIB (Genesis Crypto Blockchain Investment Bank) for $142 million in ICO financing. According to its official website, GCBIB will be the first fully compatible, encrypted and friendly bank with the necessary regulatory framework and technology infrastructure to bridge the gap between emerging and traditional financial services. It issued GXB tokens to ICO participants in the first quarter of 2019.

Ranked third is Tron Game Global Pay (GTP), which is reported to be the foundation for the decentralization of GAME BLOCKCHAIN, with the registered country being the UK.

The top ten financing projects for ICO, IEO, and STO financing in the first half of 2019

At the same time, the inter-chain pulse counted the top ten financing projects of ICO, IEO and STO financing in the first half of the year. The financing data of the second to tenth ICO and IEO are relatively similar. However, in contrast to STO, UniCrypt, the second-ranked project, has already raised less than the ICO and IEO's tenth financing.

The new and old dispute between IEO and ICO

Compared to the ICO model, the IEO model shifts the risk of the project side to the exchange and can be traded on the exchange after the release, so it is increasingly welcomed by investors. This is also confirmed by the statistics of the average token sales time in the Inwara report. The average token sales time for IEO projects is 5.5 days, while the ICO project is 97.2 days long. 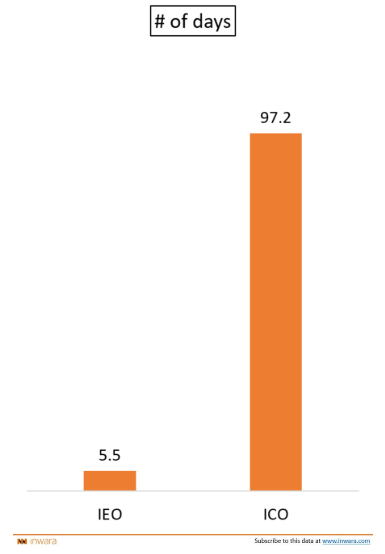 At present, it seems that among the three cryptocurrency financing methods, only STO is regulated and protected. In countries such as the United States, it has been regulated by securities institutions and relevant securities laws and regulations. However, under the centralized system of STO, it is difficult to break through the constraints of national borders. Relatively low risk, but gradually abandoned by investors.

However, in the relatively lack of supervision, the IEO model has a better development trend, and there are many high-quality projects. But it is worth mentioning that freedom without borders is not freedom. With the lack of supervision, it is difficult to guarantee that the exchanges and project parties under the IEO model will not cooperate, so that they will repeat the mistakes of ICO.

Is there an internal contradiction in the Libra Association? Foreign media: At least 3 members are considering launching

BB: After Block.one, it is possible to pledge EOS to agents run by the Foundation