According to the coinmarketcap data, the total market value of the cryptocurrency market rose to a maximum of 185.892 billion US dollars today, the highest since November 18 last year. Digital currency analyst DonAlt believes that BTC fluctuated for nearly 150 days in the face of $6,000, but fell more than 50% within 30 days after the break. The BTC then oscillated for 130 days in the face of $4,000, and then only rose 25%. So he thinks investors don't need to be eager to go short, it's not the time.

I agree with his logic. It is impossible to make a profit in the spot market. Only when the short-term futures market is short can you get a big profit, but the current BTC futures price has always been in a premium state. If the futures short position is to suppress the spot market. That will inevitably lead to a crazy pull up of the spot, resulting in a phenomenon of discounting, which is more convenient for them to make a profit. It is said that if they want to annihilate, they must first make it crazy. We have been emphasizing that the macro logical judgment is better than the technical judgment, that is to say, the general direction is correct, you can hold it more firmly, instead of getting rid of the technical scam.

BTC's futures price has been in a premium for the spot price, but we can see from the time-sharing chart that after the target hit a new high, it then stepped back on the flag-supported lower rail support, and then quickly pulled up again. Going back to the upper track, but the obvious volume is insufficient, and the position may be repeated again. At present, the big cake has not yet successfully attracted the attention of new funds. It is necessary to wait patiently and return to the lower rail of the flag. Low suction, if there is no volume released, it can be partially thrown to $5,300. Pay attention to the rhythm and still see $5,900 in the medium term. 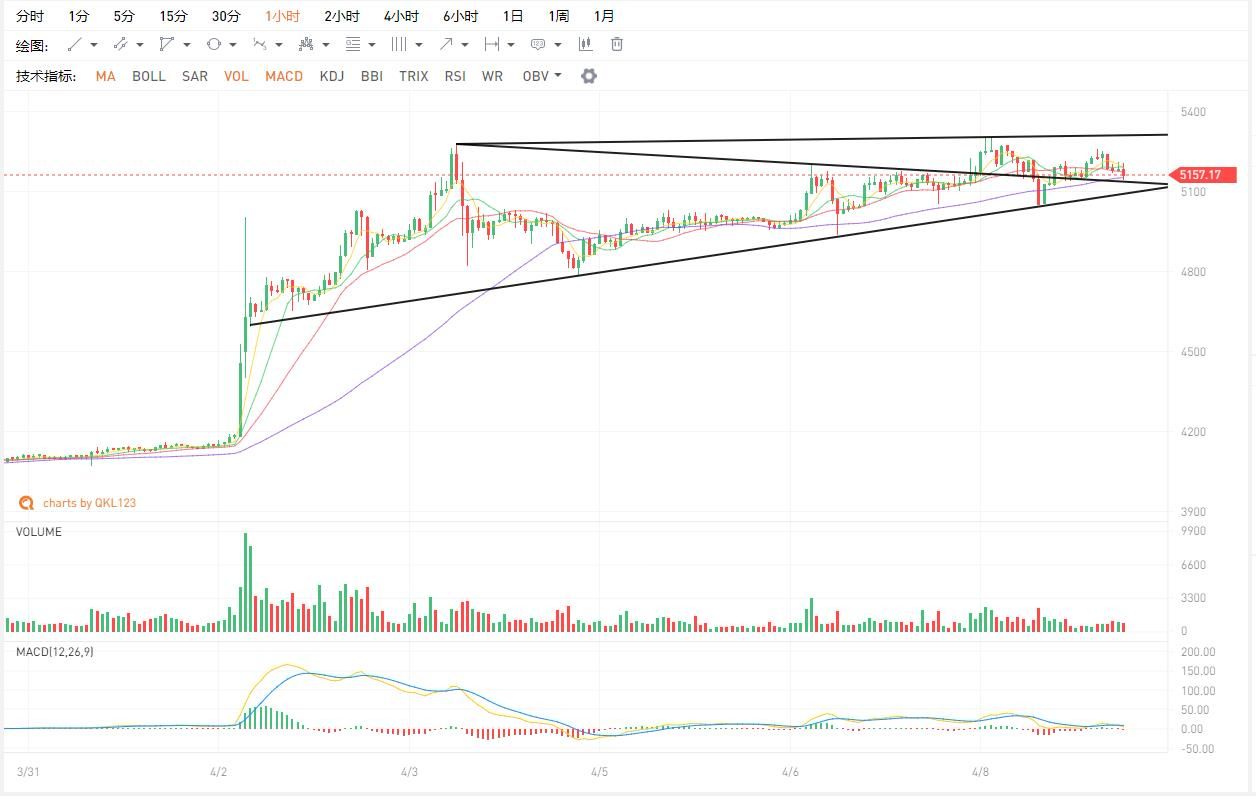 ETH's 1-hour-level macd indicator continues to diverge downwards, and the volume is insufficient. It is still necessary to step back on the $170 (the flag-shaped finishing track). Earlier we mentioned that the skyrocketing of the altcoin has caused people to have unlimited Imagine, basically in line with expectations, back to step can be low-sucking, the next target is around $230, the space is acceptable, and once again fell below $166 to leave. 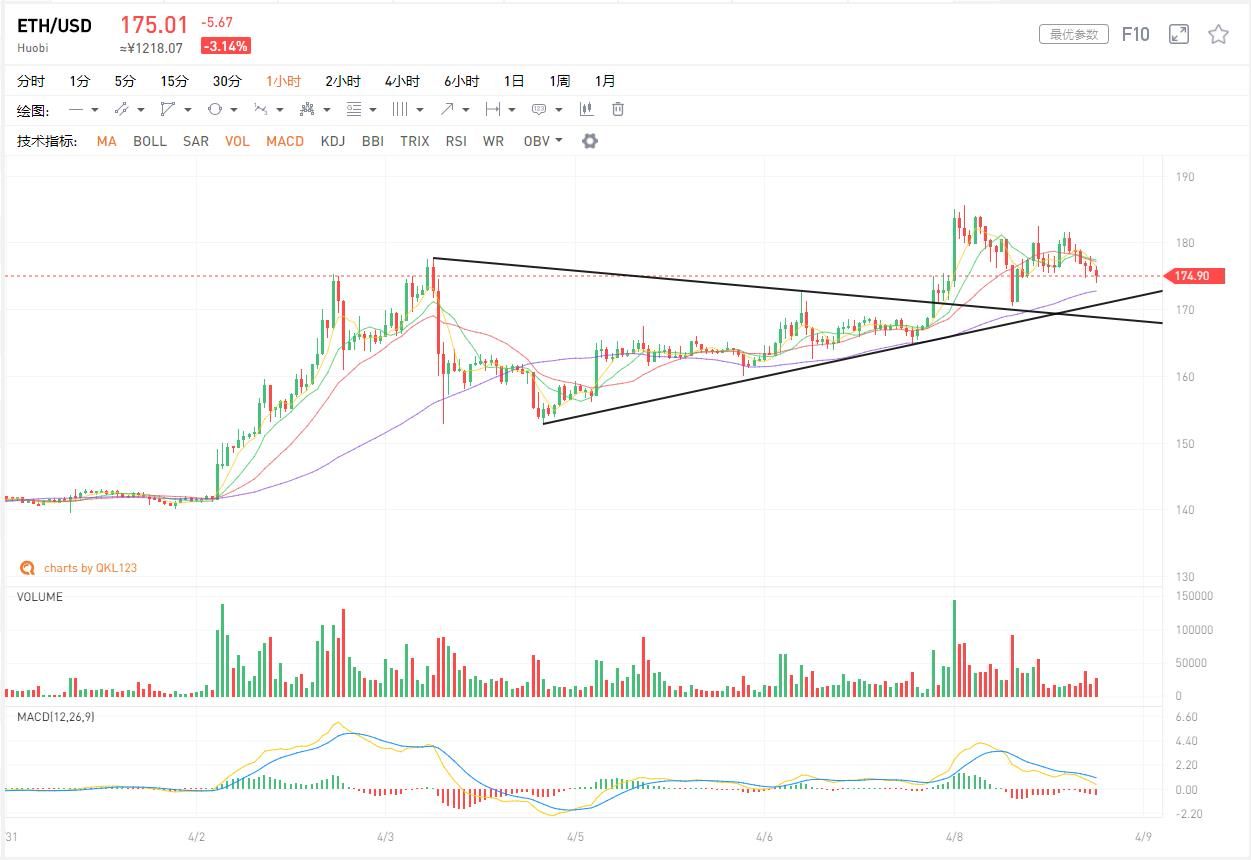 According to the bitcoinexchangeguide report, Ripple's xRapid product received an honorary award in the Fast Company's 2019 World Creative Awards. The decision to grant xRapid is because it reduces the cost of cross-border remittances and increases the reliability of these transactions. XRP once again fell below 5 antennas, continued to sway, the head gave you a dizzy, has not broken through the important pressure of 0.38 US dollars, the target's trend is weak, may be post-production, the current support of the target is around 0.348 US dollars, we still In order to see more and more, it is possible to take off at any time. The next target is around 0.43 US dollars. It is defensive, and it has broken below 0.348 US dollars to reduce the position and fell below 0.3 US dollars to wait and see. 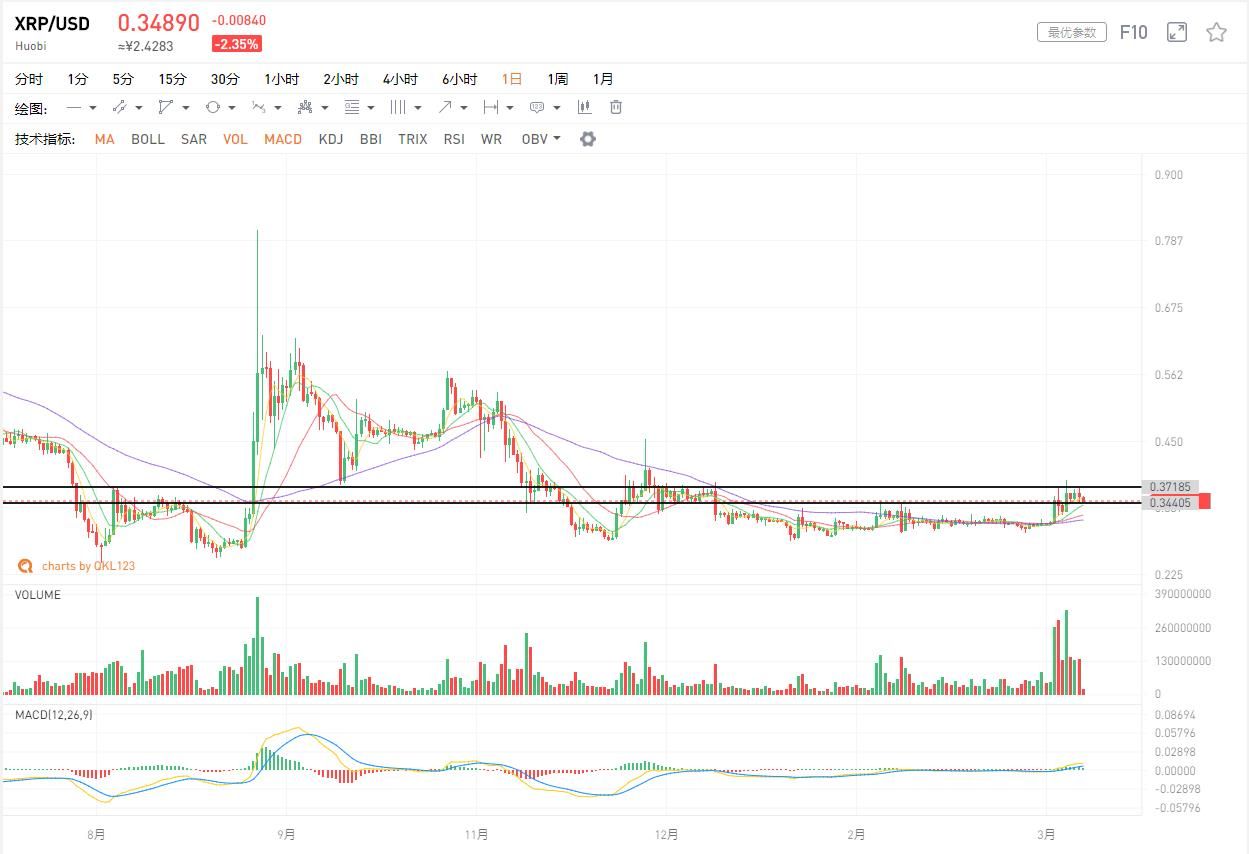 BCH has returned to under $310, the volume has shrunk, and the buying has been insufficient. From the hourly trend, the target has also formed a flag-shaped consolidation trend. It is still running in the flag-shaped interval, paying attention to the target. The direction of the breakthrough must be carried out, otherwise we have to come back, we still mainly look at the more, the next target is around 410 dollars, do a good job of defense, take the amount below the lower rail support, pay attention to lighten up, may step back With a support of $270, you will step back to $226 and go to that point to pay attention to low suck. 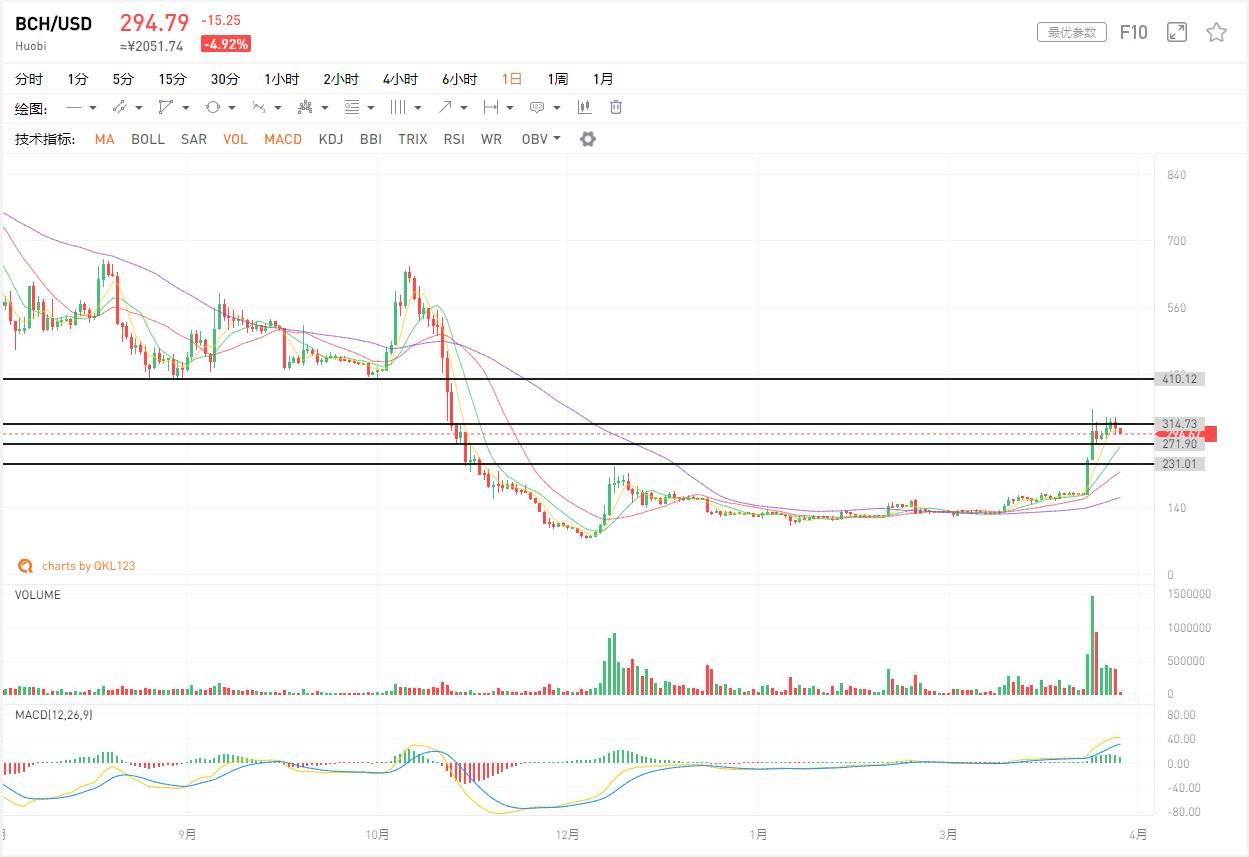 LTC LTC tried to attack the 100-dollar integer mark twice. The current trend is a bit like the M head. The trading volume is shrinking. It can be operated according to the original plan. At present, it has fallen below the 5 antenna support and can choose to lighten the position. The lower support level Near the $75, the support is relatively strong, can be low-sucking, effectively fell below 75 US dollars, the M head was established, leaving the market to wait and see.

EOS EOS currently has signs of falling below 5 antennas. The time-sharing level is also a trend of flag-shaped finishing. The target is already close to the lower-track support level. It can be appropriately low-sucked and maintains the upward trend of the shock. It is expected to be in the range of 5-5.8 USD. After the internal shock for a period of time, in the direction of selection, if you break below 5 dollars, you need to lighten up the position, and you may return to the important support level of 4.4 US dollars. 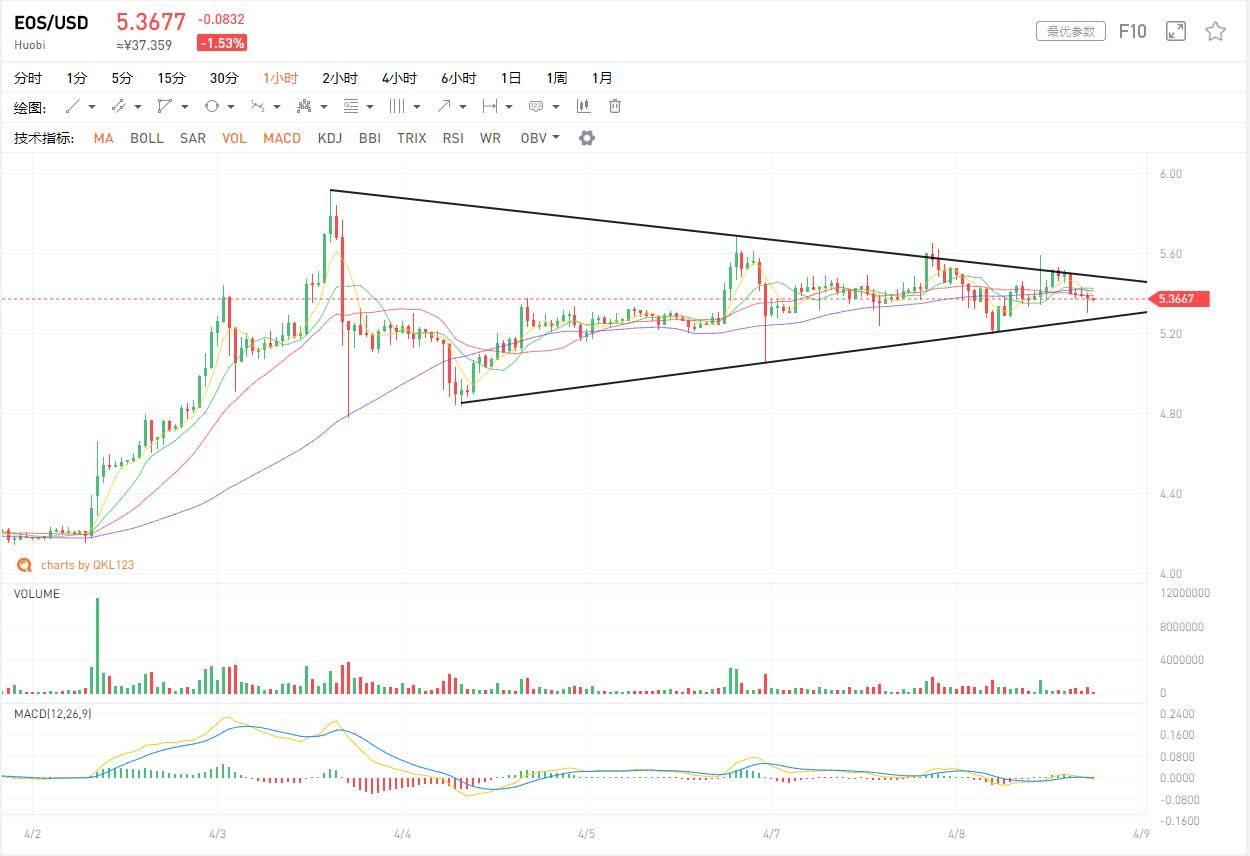 TRX Today TRX's stable currency is on the line. The neckline at the bottom of the head and shoulders has broken through. The macd indicator has reached a strong area above the zero axis. The moving average system is diverging upwards. The volume is effectively enlarged. You can actively do more and set a stop loss. Effectively fell below $0.028 to leave. 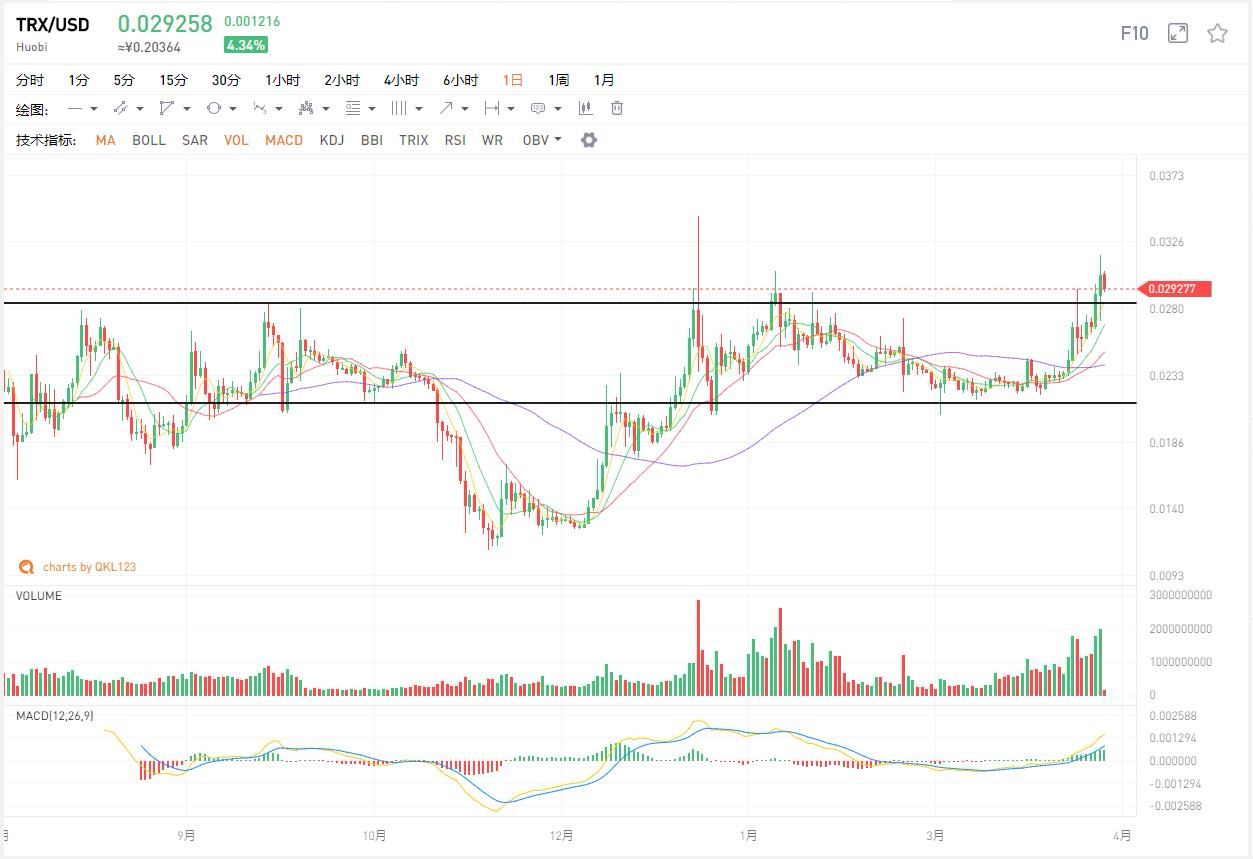 HT pays attention to whether the platform coins are heads or shocks. HT has confirmed that the 5 antennas are effective, and the 5 antennas are turning downwards to form pressure. The macd indicators are again diverging downwards, the trend is downward, the market is weak and the positions are weakened, and the trend is effective. If you break $2.4, pay attention to leaving the market and top continues the downward trend. 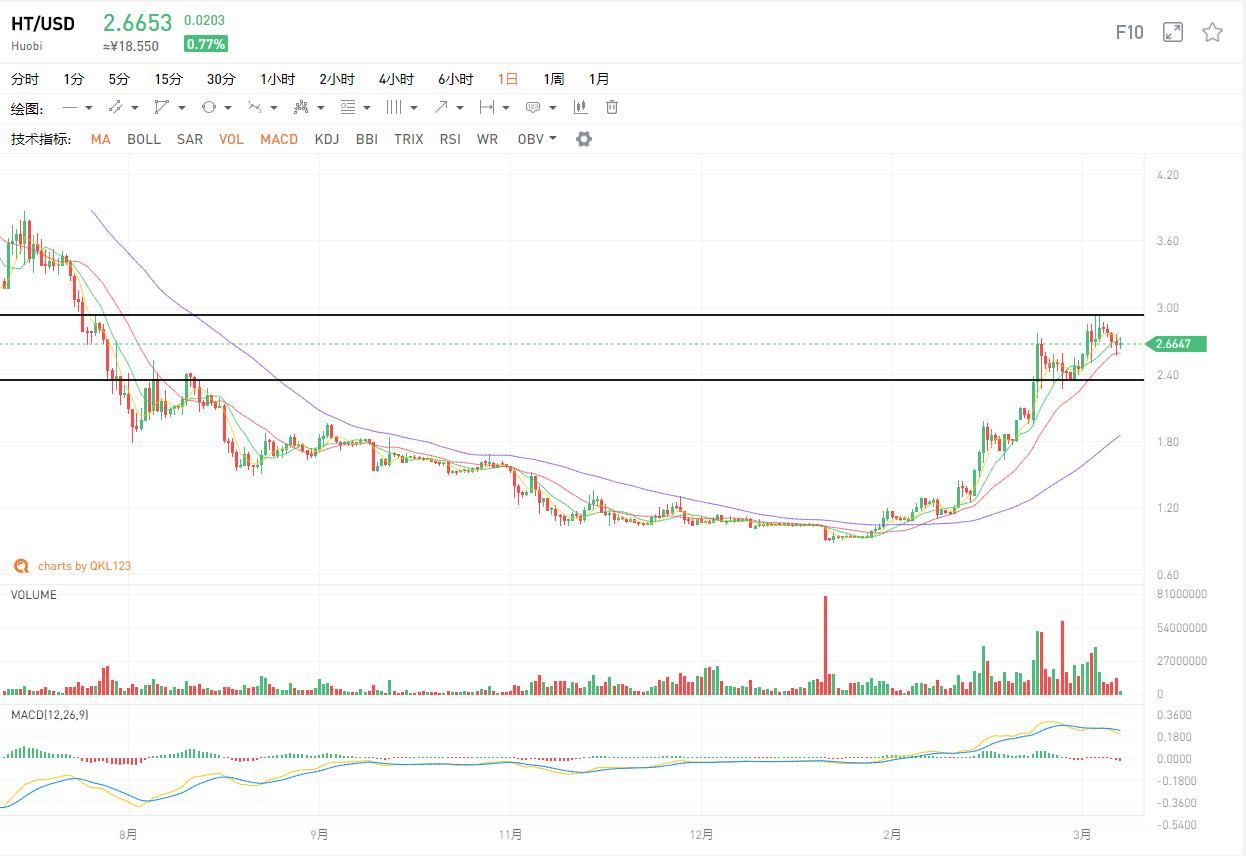