Central media coverage of Facebook Libra will trigger a larger discussion, allowing the public to more fully and objectively understand, understand and even accept blockchain and cryptocurrency.

In the third week of Facebook’s release of the Libra white paper, the central media’s evaluation of it finally broke out.

First, the English version of the Global Times, which is owned by the People’s Daily, first took the lead on June 25. The English version of the Global Times clearly stated that "the era of global digital currency competition, China cannot be absent" and called on China to participate in this round of digital economic competition. "With the advent of the global digital economy competition era, it is necessary for Chinese industries and regulators to conduct more dialogue on digital currency, understand and even encourage digital currency. Otherwise, China may fall behind in the new financial landscape." 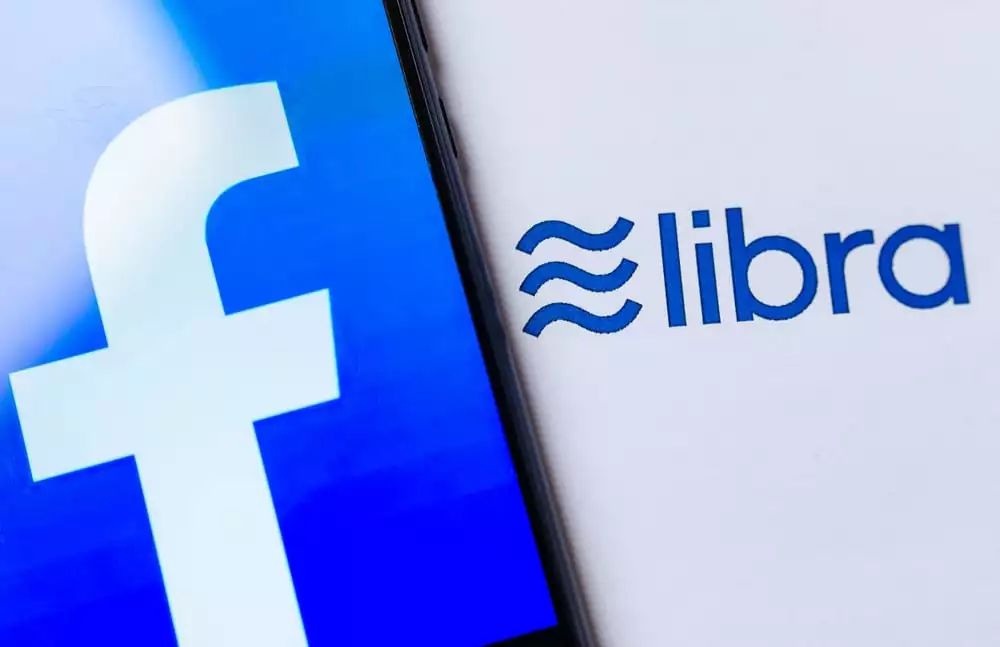 Later, CCTV reported that Chen Yulu, deputy governor of the central bank, delivered a speech on the eve of the G20 summit, saying that "China is concerned about the application of new technologies in the financial sector, including digital currency, encrypted assets, etc. China has done a good job in this regard." This is the first time that the central government has publicly expressed concern about digital currency and encrypted assets, and at the same time affirmed the status quo of domestic development.

Finally, People’s Daily published a comment on Facebook Libra on June 28, pointing out that it has data privacy, financial monopoly and supervision, and reducing the monetary sovereignty of developing countries. However, it also said, “It’s never been to defeat you. Opponents, but novices, in the face of new things like Libra, we need to keep an eye on and think."

Unlike the previous report on blockchain technology, with Facebook launching Libra and Bitcoin breaking through $10,000, central media such as People’s Daily and CCTV have also significantly increased their attention to cryptocurrency. For blockchain practitioners, the central media report is an important indicator for assessing the direction of the policy. So what signals does the Global Daily, CCTV and People’s Daily report on the cryptocurrency in a short period of time?

Global Times English: The era of global digital currency competition, China can not be absent

On June 25th, the English version of Global Times published a commentary article "The era of global digital currency competition, China can not be absent", clearly pointed out that after Facebook issued the digital currency Libra, it has the right to issue coins for the global 2.7 billion people. An independent "central bank" in the digital economy. 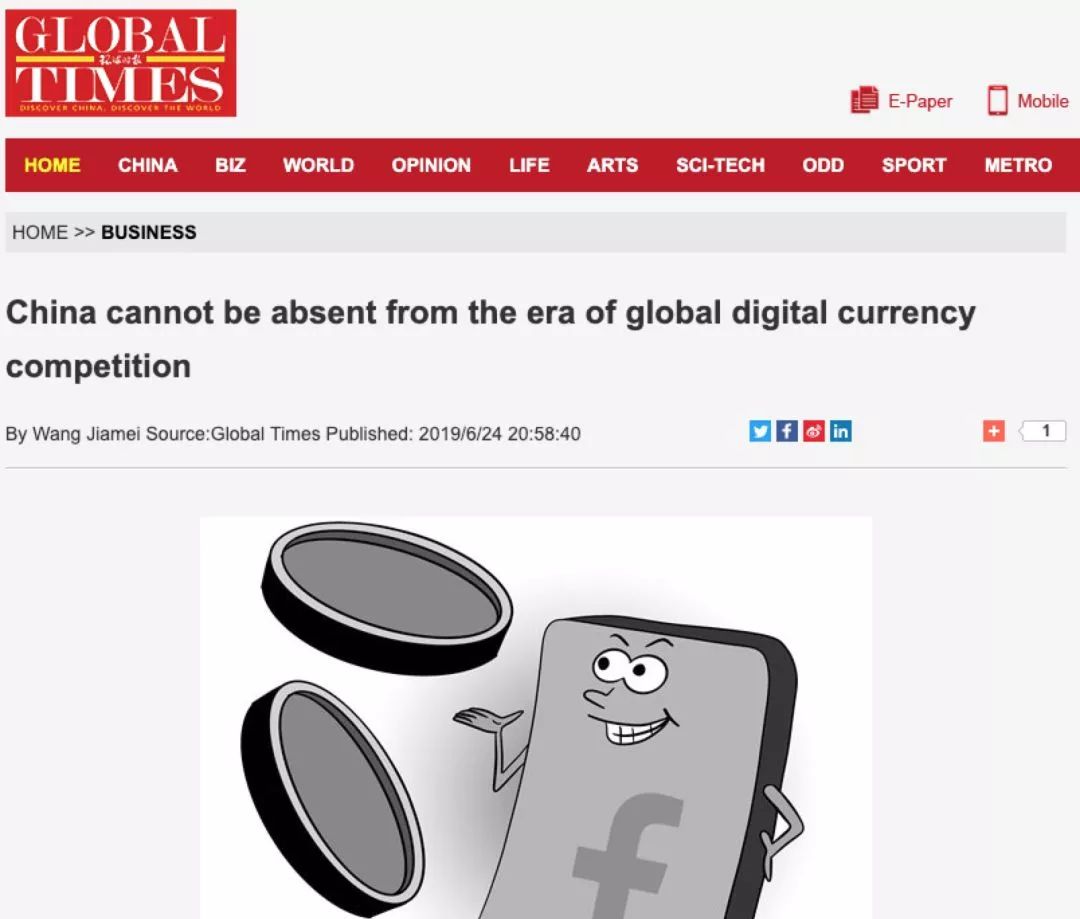 The English version of the Global Times believes that China must participate in this round of digital economic competition. "With the advent of the global digital economy competition era, it is necessary for Chinese industries and regulators to conduct more dialogue on digital currency, understand and even encourage digital currency. Otherwise, China may fall behind in the new financial landscape. "

According to Baidu Encyclopedia, Global Times is an international news newspaper sponsored and published by People's Daily. The English edition of Global Times was launched on April 20, 2009. It is the second comprehensive English-language newspaper issued nationwide in China. It is also the only newspaper that conveys comprehensive news in line with China's basic national conditions.

The English version of the Global Times mentions three points in the article:

1. China's digital economy has reached more than 30 trillion yuan. China's Internet companies have made outstanding achievements in mobile payment and e-commerce. Therefore, China has the ability to participate in the next stage of digital economic competition;

3. With the advent of the global digital economy competition era, it is necessary for Chinese industries and regulators to conduct more dialogue on digital currency, understand and even encourage digital currency, otherwise China may fall behind in the new financial landscape.

This actually sets requirements for entrepreneurship and regulation in the digital economy. Specifically, Chinese companies must actively participate in a new round of market competition, and regulators must develop regulatory measures that match them to create a more stable financial environment.

Blockchain practitioners have captured positive signals. After the publication of the article in the Global Times, many practitioners have forwarded their praises, and they are full of expectations for the next market trend, as the coin wisdom CEO Long Shizeng said, from the company pass to the industry pass, to the pan The organization's digital currency, the new economic system and the old economic system, policy from game to integration, the future of multi-currency competition will become the norm.

As one of the most influential central media in China, People’s Daily published an article entitled “Libra on Facebook: Changing the World or Opening the Box” on June 28th, and publicly commenting on the Facebook encryption project for the first time. 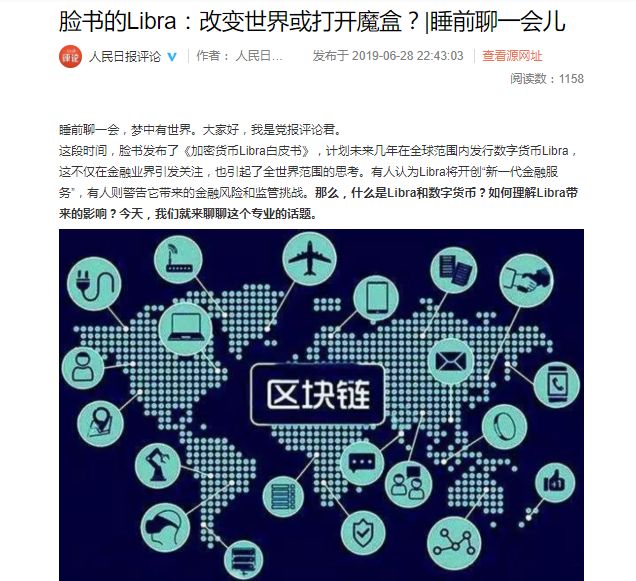 This is not the first time that People’s Daily has explored blockchain and cryptocurrency. As early as the beginning of last year, the People’s Daily published a full-page commentary article “Three Questions Blockchain”, “Capturing the Opportunity of Blockchain” and “Being a Leader in the Digital Economy”, and positively affirming that the blockchain is reducing the cost of transmission. And liberate the role of productivity.

In July 2018, the People’s Daily published the article “Quality Development, Now There is a Future for the Future”, further pointing out that the domestic implementation of the innovation-driven strategy and the new round of scientific and technological revolution are at an important historical intersection, the Internet, big data, and the cloud. The degree of integration of computing, artificial intelligence, blockchain technology and the real economy has further deepened. It is worth noting that in August 2018, the People’s Daily Publishing House also planned and published the book “Blockchain – Leading Cadres Reader”, which sparked heated discussions.

In 2019, the People’s Daily’s attention to the blockchain has increased:

In February, the front page of the People’s Daily published the article “Improving the ability of science and technology innovation – grasping the new connotation of the important strategic opportunities for China’s development”, clearly pointing out that the new generation of science and technology revolutions such as blockchain will reshape the global economic structure;

In March, the People’s Daily published an overseas version saying that the blockchain will be the key technology of the fourth industrial revolution, and blockchain technology is gradually sinking into various scenes of people’s work and life;

In April, the People’s Daily mentioned in the discussion of personal data topics that the blockchain allowed data “who owns and who benefits”.

It can be seen that People's Daily has been paying close attention to the development and progress of blockchain technology and recognizing the value of blockchain in reducing trust costs. It is foreseeable that the People's Daily's latest comments on Libra will lead to a larger discussion, allowing the public to more fully and objectively understand, understand and even accept the blockchain and cryptocurrency.

CCTV: Keeping increasing attention to all aspects of the encryption industry

Not only paper media, as the most important TV media in the central media, CCTV's attention to blockchain and cryptocurrency is also increasing. On June 24, Chen Yulu, deputy governor of the central bank, delivered a speech on the eve of the G20 summit: "China is concerned about the application of new technologies in the financial sector, including digital currency, encrypted assets, etc. China has done a good job in this regard. " Received a report on the CCTV Chinese International Channel.

Then, CCTV even reported on the bitcoin price and the mining industry. In February 2019, the CCTV Financial Channel again mentioned bitcoin-related content and recommended the book "Encrypted Assets". The moderator commented that with the advent of bitcoin and blockchain technology, investors are facing another investment opportunity since the rise of Internet technology, and since Bitcoin, there have been more than 800 types of encrypted assets. Assets reveal the future direction of financial development.

In March, the “Transaction Time” column of the financial channel reported on the price of Bitcoin, and mentioned the second largest digital currency, Ethereum and the current state of the currency. The report pointed out that Bitcoin has gradually entered the public's view. Although most governments do not recognize the legal status of Bitcoin as a currency, in a very few areas of the Internet world, Bitcoin has begun to be a kind of circulation. tool.

CCTV has repeatedly reported blockchain and cryptocurrency, indicating that CCTV's attention to all aspects of the encryption industry continues to increase.

In December 2018, Xinhua News Agency commented on blockchain and cryptocurrency, and believed that the era of “industrial blockchain” is coming soon. In the future, digital assets and industries will be deeply bound, and market supervision will be more perfect.

In January of this year, Xinhua News Agency evaluated the blockchain in the article “Blockchain at the Crossroads”. “Mature technology often grows an annoying look when young.”

With the launch of Libra, a cryptocurrency project launched by Facebook on June 18, the Xinhua News Agency also mentioned the impact of Lirba in the article that the price of bitcoin continued to rise. It pointed out that “the news of Facebook’s release of the cryptocurrency Libra has greatly increased the market’s popularity. Attract more investors into the cryptocurrency market."

Conclusion: The state pays close attention to Libra and cryptocurrencies

Not only the central media, but also senior government officials are actively concerned about the possible impact of Libra.

On the summer of July 1st, Davos, China Construction Bank Vice President Huang Yi said when talking about Libra, if the Libra model is successful, it will not be “challenge” but “subversion” on the banking system.

"The invention of the telegraph produced SWIFT. The invention of the telephone produced the ATM machine. The wide application of mobile phones and the Internet in the financial market has greatly improved the efficiency of the transaction. Internet finance has changed the ecology of finance. Internet thinking has become an important consideration for the thinking of traditional banks. The challenge, the later blockchain, cloud computing, big data has created even greater challenges. Now that Libra is successful, it is not a challenge but a subversion for us."

Long before Facebook officially launched Libra, domestic researchers expressed concerns about the development of China's blockchain and encryption finance. Meng Yan, a researcher at the Digital Assets Institute, pointed out that the mainstream US economy is gradually embracing the blockchain and encryption assets, but its influence is dwarfed by Facebook's cryptocurrency. Meng Yan believes that Facebook cryptocurrency "will be the most significant event in the cryptocurrency field after the launch of Bitcoin's main network in 2009, marking the upgrade of non-state-issued digital currency applications from 1.0 to 2.0." "If at the new stage of the digital economic revolution, China cannot actively participate. Not only will it be completely passive in the new competition, but the advantages already gained in the Internet and financial technology fields may also be lost."

Central media collectively voiced Libra, do you think it is a good signal? Welcome friends to leave a message below~
Text | Literature