Today, the Bank of Japan is clamoring to strengthen the supervision of the digital currency trading platform. Every time Japan strengthens its supervision, it will lead to a short-term downturn. Will this re-enact history?

Many people think that Nakamoto is actually a Japanese, not only a name, but even the largest digital currency trading platform was Japan, but since the money on the Mt.gox platform has been stolen by hackers, Japan is in the currency circle. The status began to decline, but Japan always likes to dictate the trading platform. At the end of last year, with the fall in the price of coins, Japan has various types of regulatory measures. Japan No. 12.2 said that digital currency will help evade taxes. To strengthen supervision, Bitcoin has a three-day losing streak, down 13%. For example, 11.26 Japan focuses on IC0, bit The currency bill fell by 10% on the day.

Even in the case of bitcoin continued to rise in the past few months, the power of Japan's regulatory shorts is still strong. 4.15 Japan's Financial Services Agency asked the digital currency platform to strengthen cold wallet management. Bitcoin fell 3% on the day and then walked out of the continuous line. 4.23 Japan formulated the G20 regulatory proposal, and the currency price peaked down. It fell 5% in two days, and it was also the only decline in April. Why does the price of the currency fall sharply every time Japan announces to strengthen supervision? The reason is that there are more retail investors in Japan than Koreans. The following picture is the premium index of the Japanese platform Bitflyer. In the period of the big rise in May, Japanese retail investors are even willing to spend 27% more money to buy bitcoin. The retail investors chase the ups and downs, once they hear the headlines report bad news, Will sell directly in a full position, resulting in a short-term plunge.

Akong feels that every time Japan announces to strengthen supervision, it will bring short-term negative effects, but it cannot change the trend of the trend, so it is better to wait until the market bottoms out, then go to dips.

There were a number of large-scale transfers over the chain, which made the currency price a cash-out expectation. From the trend point of view, the price of the currency once again returned to the 10,850 US dollars mark, and the following 10,850 US dollars repeatedly rebounded, indicating that the long and short sides have changed hands here several times, which is the key point of current support. Only by returning to $11,420 can a new bullish trend be formed. The operation can be wait and see. Next, the BTC peaked and fell back to the bottom of $10,850. 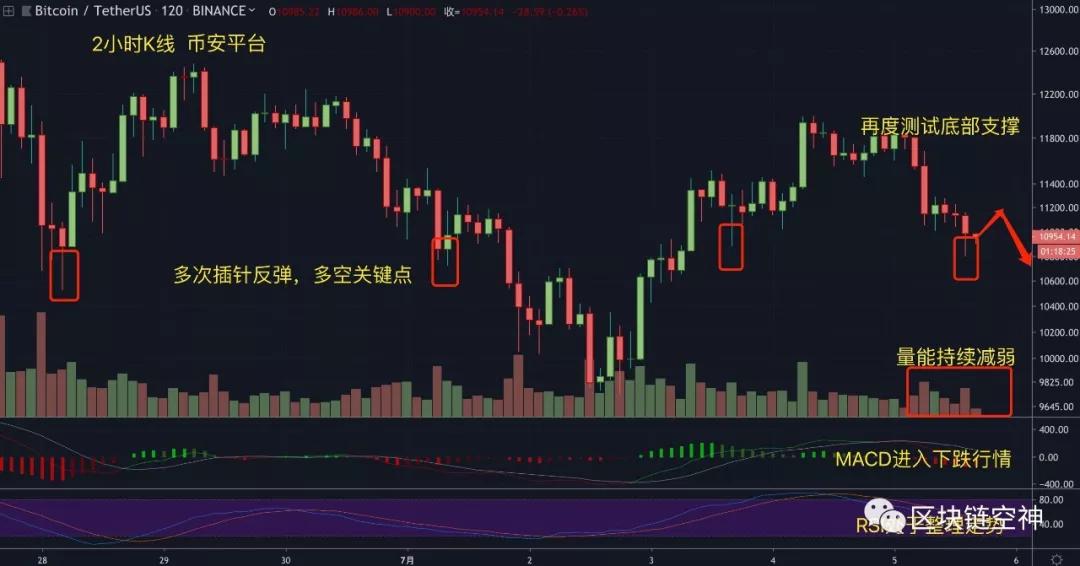 In the past two days, there was an unclear address to transfer EOS to Upbit. It is suspected that Plustoken is cashing in EOS, which is expected to be negative for the price of the currency. From the trend, the small vertices are continuously decreasing, the quantity can continue to weaken, and the operation can be wait-and-see, waiting The market is further explored. Next EOS bottomed out to $5.78.

The price of the currency has entered a triangular convergence trend, and the amount of energy continues to weaken, indicating that the volatility continues. Only once again, if the volume is over 124.4 US dollars, it can return to the bullish trend. The operation can be high and low, waiting for the market to change. Next LTC oscillated at $118.5.

Yesterday, the Soxex trading platform was smashed. Nearly 10 million USDTs in the platform began to transfer to other trading platforms. Every time there is a running platform, ETH will be used as a bearish currency, because ETH transfer speed is fast and liquid. Well, many people take ETH out of the box and have a negative impact on the price of the currency. From the trend point of view, ETH is still in a triangle convergence trend, operating on the sidelines, waiting for the market to further bottom. Next ETH was shocked at $287.5.

The volume can continue to weaken and is still in a daily volatility. The operation can be high and low, waiting for the market to change. Next, the BCH shocked to the bottom of $398.5.

Today, the dog money has landed on the currency, and the short-term price of the currency has soared by 40%. As soon as Zhao Changpeng gives the reason for the currency, the dog currency has a great community power. Therefore, in addition to which platform to watch speculative coins, it depends on whether there are many people playing. As long as there are more people concerned, there is a certain consensus, and the currency has a value space. From the perspective of the trend, there has not been a huge amount of money, and there is still room for further increase in the hands of insufficient turnover. In general, the new currency will be adjusted back to the bottom, in order to rise twice. Next DOGE stepped back to $0.0038.

KMD and REN led the market. In the past two days, Akong has been talking about anonymous hotspots. You will find that the recently promoted small coins are all anonymous. KMD is an anonymous hotspot and REN engages in anonymous agreements. Therefore, the V20 meeting a few days ago is that the United States wants to use the power of all countries to fully control the digital currency world. Most people want to escape from supervision, and they must rely on the power of anonymous coins. Anonymous hotspots will be an explosive opportunity. From the perspective of market hotspots. The OK announcement will cancel the cancellation of the card cancellation fee and cause the OKB to skyrocket, causing the currency circle to be heated. Everyone is thinking that the platform will use OKB to offset the handling fee. Akong feels that the most important thing in the currency circle is a contract spirit, because it is originally Lack of supervision, so trust is more valuable, OK has accumulated so many years of reputation, I do not know how long it can consume. The price of ALGO has already been waist-shouldered, and the people in the first-level market auctions have sold off. Now they will buy it again and wait until next year to pay, and they will earn half, and only the retailers who follow the trend are the most injured.

The activity on the Bitcoin chain surged and fell, and the number of transactions to be confirmed increased.