In the early hours of this morning, Bitcoin broke through $11,500, leading the mainstream currency to a small increase, but the rising phase soon ended, and the trend entered a downward adjustment stage, which fell to a low of $11,106 in the morning. For this callback, the author also gave you To be prepared, so I am not worried about the impact of this wave of decline, the recent $11,500 has been giving pressure to the trend, this wave of callback also gave the corresponding operational recommendations, so this time the decline is actually not risk Strong

On the daily chart of Bitcoin, the Bollinger Band has signs of condensation, and the upper rail is still a parallel trend. The Bollinger Middle Track continues to rise at the current $10,950, and the 10-day moving average wears the 10-day moving average to form the Golden Fork. The conditions of the long market, the main force of this operation method gave a lot of people a lesson, this time callback Chen Chuchu has a suggestion to give a big reminder, the pressure above is always there, although the main operation method is hidden, not biased Do not rely on the choice of breakthrough in the early morning, let the trend into a long market, and then give the act of temptation, and the recent trend is indeed a bullish trend, but the road is full of thorns, the risk that the dike may be triggered at any time;

On the 0-axis, the daily-level MACD continues to be released downwards. It can be seen that the amount of energy flowing out yesterday is obviously a step that strengthens the outflow. STOCH forms a dead fork on the 20 horizontal lines, and the bulls are once again suppressed. The RSI is down at 50 levels. The trend of BTC continues to decline, but the bullish sentiment has been reduced to a minimum, and the bears have basically reached a very high bottom, and the continued decline is only likely to break.

Yesterday, I mentioned to everyone that I can take over. Today, even if the trend of Bitcoin is close to the bottom, it is still a downward trend. Therefore, friends who follow the price reminded by the author must make fast forward and fast. It is recommended that the altitude be low. In the 11,000-11100 USD, follow the appropriate amount to see the 11300-11400 USD. The breakthrough will continue to follow the 11700-12000 USD. The empty order can be opened in batches around 11700-12000 USD, supporting the USD 10950. The resistance is 12,000 US dollars; the operation has a good stop loss and profit, the author's operational advice will let the investment friends bring a good stop loss, many people will not see the trend, take a good stop loss to avoid mistakes or less Some key conditions lead to operational problems, which is why I have always stressed. 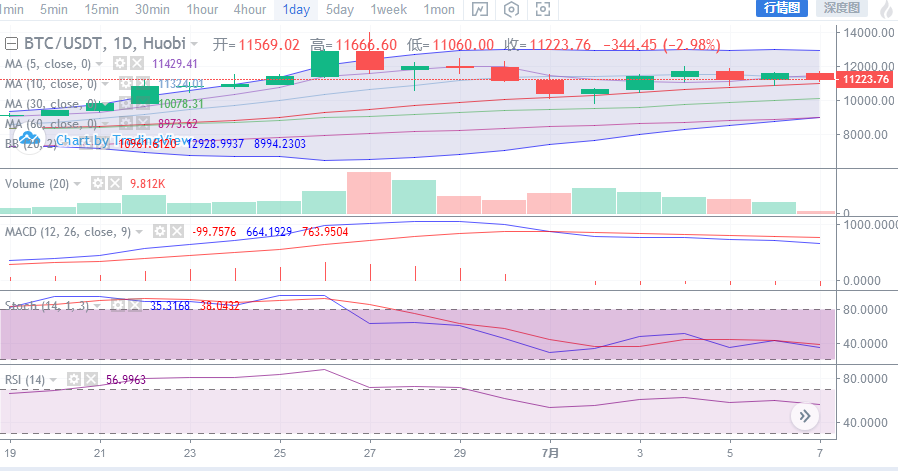 ETH is the trend to continue to adjust. Yesterday's high point is still blocked in the middle of the Bollinger Band, so the trend needs to be adjusted. This wave of callback is risky, but only need to keep 280 dollars, the follow-up rebound is also Will be carried out here, the operation is recommended low altitude, support 285, resistance of 300 US dollars.

After the next test of $280, the trend will break through to $300, so friends who have more to do with the $300 don't have to worry about it. Although it can be solved, Chen Chuchu advises that you should not easily follow the high position before you are sure. More, the risk is greater than the income, it is also unfavorable to oneself, and grasping the timing of operation is the foundation of sustainable profitability. 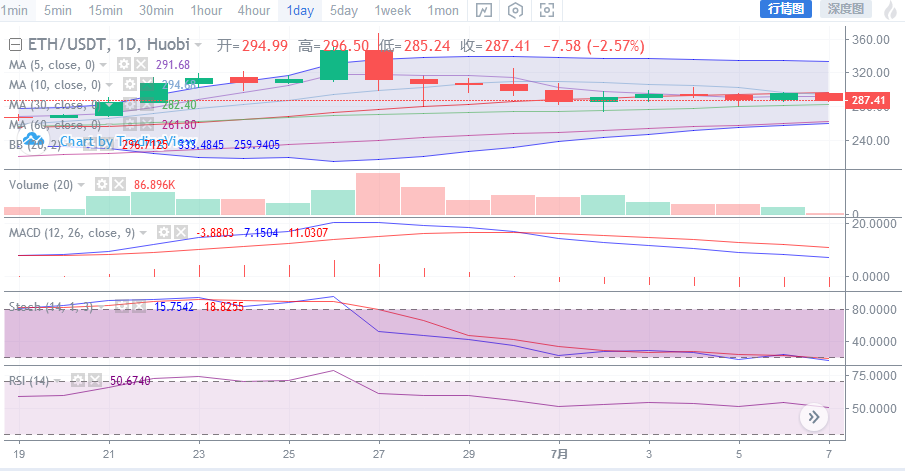 The rebound of XRP bottoming is still a blocked trend. The follow-up needs to be adjusted. The price mentioned by Chen Chuchu can still be followed up, supporting $0.37 and resistance of $0.43.

LTC continues to maintain the sideways, the top still gives a lot of pressure, so the follow-up trend will continue to enter the adjustment phase, when the trend into the bottom can be followed directly; support 110 dollars, resistance 130 dollars;

The price of BCH has been completely suppressed by the 30-day moving average. At present, there is some warmth, but the main trend is still based on adjustment. It is still the operation plan to follow up at the bottom, supporting 380 USD and resistance 430 USD;

The EOS trend is still a trend of turbulence adjustment. Yesterday, as Bitcoin rose a wave, it can be said that a small wave of temptations has formed upwards. The pressure on the top has a general understanding, so the recent trend will slowly begin to break through. Still follow up at the bottom.

The pie was brought to the mainstream currency for attack on the night, and the resistance was adjusted. The reasons can be divided into many types. From the overall trend, there is still a lot of pressure on the top of the pie. It is more difficult to drive the mainstream currency. Subsequent cakes may form a solo show, the trend has been adjusted for so long, the chips have changed almost, the adjustment has also been adjusted, and the recent outbreaks are also appearing, but it is still necessary to pay attention to the above-mentioned things that Chen Chuchu reminds everyone. Pressure, friends who are less likely to control can follow the stop loss provided by the author.

But remember not to chase after the high, Chen Chuchu is also reminded many times, the opportunity to profit will always be given, there is no need to waste the benefits that can be grasped more in the future for a big gain that may occur, the eyes should be put In the long run, the follow-up process still looks at the pressure on the $11,500. Although the pressure has been released this time, there will be different pressures on each up, so be careful.

If you are worried about your friends who will continue to fall, you only need to be optimistic about whether the $11,000 will be broken. Then the downtrend will further deepen to around $10,500. It will not be able to form a big callback until it breaks 10,000. At this stage, it is unlikely, even if a callback will be formed. There are also many opportunities for us to prevent it, so don't worry that the bottom follow-up will lead to the quilt position, then you can still follow the author's suggestion into the profit stage; the recent reversal is more, many investment friends are not enough Flexible, it is easy to cause problems with quilt cover. If you can't solve it, you can pay attention to Chen Chuchu's timely solution to the problem. In Chen Chuchu, he will seize the opportunity and enter the profit stage.