Foreword: Due to the nature of open source, the moat of the project of the encryption world comes more from the network effect. However, from the perspective of the whole process, the entire cryptocurrency is still at an extremely early stage, and there is no real network effect, and there is no real undisputed overlord, because even Bitcoin has only tens of millions of people. The user is less than 1% of the global population, so now the entire valuation is not sustainable, which needs to be observed. Always update the concept and look back at the present with the future, instead of using the present to determine the future. The author is KYLE SAMANI, translated by the "Blue Fox Notes" community "Li Xihe".

But this is not entirely true. The network effect of Bitcoin as digital gold is not as much as many people have emphasized. Network effects are subtle and often misunderstood.

This article explores the network effects of Bitcoin as digital gold and digital cash, as well as other more powerful moats for Bitcoin, although these moats have no network effect.

The basis of network effects

Network effects are a new property that occurs when:

As a product or a service is used by more people, the value of its existing users will also become higher.

There are several different network effects:

Direct network effects work because existing users gain more choices by interacting with newer users as the underlying products or services are adopted. Almost all closed-loop communication networks exhibit this kind of network effect, including web-based services such as Facebook or Whatsapp.

Two-way network effects – an increase in the usage of some users will also increase the value to other users, and vice versa. Some notable examples include eBay, Uber, Lyft, AirBnB, and Amazon's market business model. In these networks, consumers will benefit from more choices and competition among more suppliers, which will attract more consumers, and more consumers will attract more suppliers.

Data Network Effects – Products driven by machine learning will become smarter as the amount of data acquired increases. Data network effects occur in most modern cloud-based applications, but the effects of this effect vary greatly depending on the application scenario and complexity.

Measuring the exact intensity of network effects is very difficult. It is not an accurate science.

Because the marginal value of new users in the system is constantly changing, accurate quantification is very difficult. For example: Many of my friends have started to delete their Facebook files in the past few years. But Facebook may be of the same use to me in the moment as it was three years ago. That lost 5% or even 10% of Facebook friends have had little impact on my Facebook experience, because I still have 500 friends using Facebook.

Since Metcalfe proposed the valuation model of the network, it has been completely refuted. There is currently no network that follows n 2 throughout the growth cycle. Moreover, the premise of the initial assumption of n 2 is that the values ​​of all nodes in the network are the same. Therefore, compared to n 2 , the network effect of most networks is closer to n*log(n).

Obviously this valuation is more reasonable than n 2 (after all, nothing can grow nonlinearly forever), but even n*log(n) is a permanent hyperlinear curve. What we see in reality is that not only the nodes in the network have different values, but after passing a critical point, the value of the marginal nodes in the system begins to decline (for example: Facebook’s next 10 million users in Asia are now Some American users have very limited value.)

In reality, the S-shaped curve is more representative of the network effect than n 2 or n*log(n). There are many case studies that empirically prove that the S-curve is the essence of network effects. That's why the Mac can survive in the 1990s (if Windows' network effect is really n 2 , Apple probably won't survive), why there are so many chat software (Whatsapp, Telegram, Facebook Messenger, Signal) Etc.) Why is Lyft competing with Uber (as long as I can get a car in two minutes, I don't care how many drivers are on the road), and why there are so many vertical e-commerce companies that can compete with Amazon.

Even with such obvious opposite examples, why do people always say that network utility obeys n 2 or n*log(n)? Because at the beginning, it is difficult to distinguish these three curves: Of course, not all networks obey the same S-curve. Nor is it an S-shaped curve in which all networks are subject to optimal network effects.

The network effect of most log(n) cases is that there are liquidity interchangeable commodity transactions. Even if you are very radically assuming that every new user will increase daily liquidity, the marginal value of these new liquidity will be diminishing for existing users. This is true even in the early days of the network. This curve is never superlinear and it has always been sublinear.

Let us consider a simple case: each new user trading an interchangeable item can increase the daily liquidity of the item by 0.01%.

If a user owns 0.1% of the goods being traded, the value of liquidity provided by marginal users is declining. Technically, as the number of users and the increase in mobility increase, the slippage will decrease, but in fact the benefits of marginal mobility will become too low, and this effect will become difficult for users to detect. .

All transactions for a given interchangeable asset have a network effect similar to log(n), which is visualized as follows: 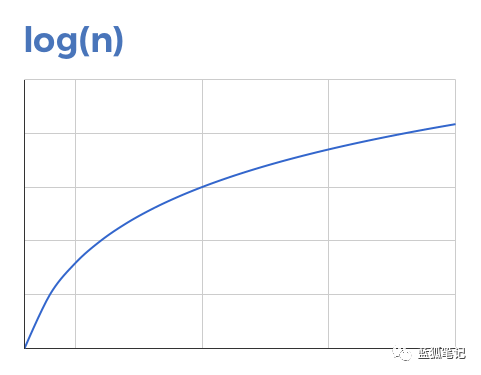 There is a wealth of evidence to prove that this is empirically correct. If the network effects of exchangeable commodity transactions are superlinear at all times, we will not have so many cryptocurrency trading platforms. What we can observe is that as long as a trading platform has some liquidity – a certain percentage of the market leader's liquidity – it can often make itself a usable trading platform and provide reasonable liquidity for market participants. .

What kind of network effect does digital gold show?

To answer this question, let us review the mechanism by which users use digital gold.

The purpose of value storage media such as digital gold is to store value for future consumption. In addition to the conversion of digital gold to other media, it must remain intact. This makes it unaffected by user increases or decreases.

When a user wants to sell their digital gold to consume other goods or services, TA needs to have a way to sell: someone must be willing to buy digital gold. This can be done on exchanges that specialize in interchangeable digital gold trading.

The practicality of digital gold is a function of its liquidity. As mentioned before, this means that the network effect of Bitcoin can be described by log(n).

What kind of network effect does digital cash show?

The purpose of digital cash is to use both value storage and exchange media. In addition, digital cash can also become a unit of account.

The practicality of digital cash is broadly a function of the number of merchants willing to accept digital cash as a payment medium for goods and services.

This shows the direct network effect (the previous phone diagram). The more people willing to use digital cash as a means of payment, the more users can do business with more merchants.

All major global currencies exhibit this network effect in their respective jurisdictions. Because merchants and consumers must pay taxes in local French currency in their own jurisdictions, they also choose to receive wages and income in local currency. This creates a powerful network effect, because few people will want to see the currency in their hands experiencing severe price fluctuations when used to pay taxes and consumption.

It can be expected that this network effect is subject to the S-curve. The role of 50% of merchants who initially accept digital cash as a means of payment is much greater than the latter 50%.

In the cryptocurrency circle, this framework is often referred to as "the debate between value storage (SoV) and utility." SoV's view is based on feedback: the more people hold Bitcoin, the greater its value, which in turn encourages more people to hold.

Of course, this feedback is also ups and downs. This creates too much volatility and creates instability, which undermines the purpose of the value store itself. When the price does not rise, we can easily believe in the value storage hypothesis. But when the price falls, the underlying value of the utility value produces a bottom price.

It is easy to forget that we are in the early stages of cryptocurrency. There are 7 billion people in the world, and fewer than 50 million people have cryptocurrencies. We are still less than 1% of global saturation. In a world of open source software where features can be replicated, the key to success is to achieve network effects as quickly as possible. This is why the power of network effects is so important. In the hundreds of millions of users, these benefits are iteratively (or failed) in the form of compound interest, creating huge differences in the ultimate value of the network.

The network effect is just a competitive moat. There are many other moats besides this.

Another moat that the Bitcoin maximists believe in is the “brand effect” and third-party ecosystem integration, such as trading platforms, ATMs, other financial products, and hardware and mobile wallets.

In order to explore the power of these moats, I will compare Bitcoin with Ethereum. This is not to say that Ethereum may replace Bitcoin, just as an example of how a competitive network can grow in just three years.

While there is no good way to quantify the value of an open source and unlicensed brand like Bitcoin, we can use Google Trend as a rough measurement tool.

Bitcoin is blue in the picture and Ethereum is red. When the difference between the two is greatest, the search frequency of Bitcoin is about 11 times that of Ethereum. Today, the difference is 8 times. Given the instability and rapid evolution of this field, this leadership position may be erased within a few years.

So what about the integration of third-party systems? At this point, Ethereum can compete with Bitcoin:

ATM – As far as I know, all cryptocurrency ATMs support both. (Blue Fox Notes: There are a lot of ATMs that only support Bitcoin. This is a bit too exaggerated.)

Mobile Wallet – Bitcoin and Ethereum have a large number of wallet applications on iOS and Android.

Other financial products – Bitcoin leads the way in CME, CBOE and NASDAQ futures, but considering the development trajectory of Ethereum, it seems reasonable to catch up with Bitcoin within 24 months.

Again, the point here is not that Ethereum will replace Bitcoin, but the advantages of third-party system integration are not insurmountable.

In addition, other competitive moats, such as branding and eco-integration, do not show higher returns as they grow in size, and are easily overtaken by competitors with superlinear network effects. We have a wealth of evidence to prove the correctness of this.

The war for cyberspace dominance has just begun. In the first 1% of all network effect curves, the difference is difficult to distinguish. It is easy to use it for valuation when the network effect is not working.

“I am sorry, we are not “traditional banks””