Figure: If “coin influence” is an equation, then “asset weight” and “discourse weight” are two variables that cannot be ignored.
Second, it is getting harder and harder, the ordinary class is in the three stages of the encryption market layout.

The first phase of the encryption market is mainly in 2010~2012. During this period, the way to expand your influence and presence in the industry is very simple, that is, buy Bitcoin as much as possible.

At first glance, the technical content of this behavior does not seem to be particularly high, because the legal currency trading channel at that time has not been closed, and the total market value of the encryption market is not high, and the price of bitcoin is not particularly expensive. In fact, this layout The threshold of means is not reflected in the "buy bitcoin" itself, but in the "dare to buy bitcoin". According to Li Xiaolai's slightly exaggerated statement, the fields involved in Bitcoin are extremely complicated, including mathematics, cryptography, topology, finance, programming, distributed computing, chip design, network management, political science, sociology, psychology. Learn… and be able to get to know and understand the Bitcoin white paper, and conclude that this is a good thing, the world at that time is very rare.

That is to say, in the first stage of the encryption market, the threshold of thinking is very high, but the threshold of action is very low. As long as you are brave enough to take the shot, you have a considerable proportion of presence in the bitcoin industry and even the entire encryption field. Influence is not particularly difficult. A typical example is a middle class like Li Xiaolai, who can own up to 1% of the entire encryption world by simply mobilizing some of his savings. [Note], it is natural to achieve class crossing.

[Note] In an interview in 2013, Li Xiaolai claimed that he “has six-digit bitcoin and starts with 1”. In view of the fact that the total amount of bitcoin on the market was less than 10 million, it was inferred that Li Xiaolai owned it at the time. The Bitcoin market is about 1% of the wealth.

However, the happy time of this niche group did not last long. In 2013, Bitcoin opened the first round of real bull market with sufficient liquidity and sufficient trading depth. At the end of the year, it rushed to a high of $1,200. Few people realize that from this point on, ordinary people can buy bitcoin to achieve the era of class crossing, that is, the first development stage of the encryption market is over. As the market value of Bitcoin has expanded to a new level, it is very difficult for most people to purchase a sufficient amount of bitcoin in this market through limited income and savings. Force and presence. In this way, they can only turn their attention to another type of crypto assets with a small market capitalization but a large growth potential – that is, the altcoin.

Later facts proved that in the second phase of the subsequent encrypted market, many of the latecomers who achieved class crossing at this stage basically relied on altcoin instead of bitcoin to turn over. During the bear market around 2015~2016, the low-end layout of the value of the altcoin (such as Ripple, Bitcoin, Ethereum, IOTA) was completed, and with the big bull market in 2017, the proportion of assets and discourse rights was obtained. The great expansion, the extent of this class leap, is generally higher than those of market participants who only have heavy positions in Bitcoin.

So, if you have the opportunity to look back at the "big bangs" at various blockchain conferences around 2017 and 2018, you will find a very interesting phenomenon – the title that many currency laps can give, often There is a “early investor in the XX cottage project”, which shows that it is the investment in certain altcoins, not bitcoin, that helps them achieve class crossing. 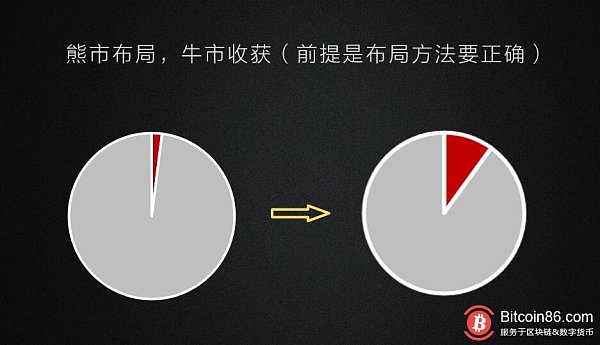 If the first stage of the cryptocurrency market is to end the bull market in 2013, then the second stage is to stop the bear market in 2018 – as the project's suppliers and investors flood into this “financial beast” "The market" is getting more and more difficult to gather on the market, and the more intensive and more unpredictable buying and selling orders have also increased the cost of market value management. People began to panic and found that even 2019 The "bull market" of the year, the legend of "a hundred times a thousand times" can not be reproduced, this market is increasingly showing a trend of stock market, even if the amplitude of 10% of such fluctuations has become a "surge" in public opinion. "Plunge." Whether buying bitcoin or buying altcoin, it is no longer possible to simply and ruthlessly achieve class crossing. At most, it can only allow assets to increase in value, that is, "the poor are rich and the rich are richer."

Under such circumstances, people can only find the rest of the way to share the dividends of the cryptocurrency industry while investing in bitcoin and altcoin, and then cross the class they are in. From the current point of view, this way of cutting in is to join the blockchain company or the community. By becoming a practitioner of this emerging industry, while expanding its influence, it also allows the value of its unit time to grow rapidly. After all, Compared with the unpredictable cryptocurrency price, the “time value of practitioners” has a relatively large development space, but the uncertainty is relatively small. The most important thing is that this is a blue sea that has not been fully exploited. .

Table: According to the difference in the way ordinary people cut in, the development of the cryptocurrency market can be roughly divided into three stages. 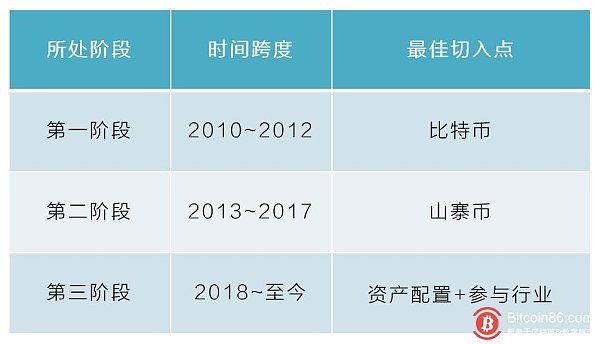 [Note] In addition to becoming a practitioner in the cryptocurrency industry, equity investment in certain institutions and the purchase of some blockchain concept stocks are also ways to share industry dividends, but the former does not apply to ordinary people, while the latter does not. Too mature, so it is not considered and discussed here.
Third, a new stage, a new entry point

I believe that careful readers can easily see that the three stages mentioned above, in which the ordinary people participate in the encryption market, have a very obvious feature, that is, the operational difficulty coefficient increases rapidly. It can be said that for those who want to gain a lot of benefits from this industry, or even achieve class crossing, and change their own destiny, at this stage, there are quite a lot of things to think about and implement: on the one hand, as an investment You must rationally allocate the proportion of Bitcoin and Ark in your portfolio; on the other hand, as a practitioner, you must strive to maintain or even expand your industry influence. Only by "walking on two legs" will you be able to replicate the hierarchy of the predecessors. And if you just want to achieve the same effect by imitating the behavior of the predecessors, it is already impossible.

In order to express this situation more intuitively, the author can do a scenario simulation for each friend: If we divide the social class into 100 layers, then the traversing effect brought by the cryptocurrency can achieve 50~70 layers. Crossing, considering the start of the encryption market for only ten years, many "old leeks" immersed in the market for five or six years, so this score is quite amazing. And if you ambush projects like IOTA, Ruibo, and Ether in 2014 and eat most of the growth bonus, then you will achieve a class leap of 50 or so; but the same thing is now, you It may also realize a four-and-five-level class leap. Other than that, there are several new entangled KOLs from 2018 to 2019. As in 2015~2017, just a heavy acuity coin becomes a celebrity in the industry? By the way, if you accidentally step on the air project while investing in the altcoin, you may not go back and return to poverty.

Figure: In different stages of the encryption market, the means to achieve the same level of traversal is not the same. The experience of rushing to copy past experience often exceeds the expected range. As for many currency circles, it is highly recommended and only participates. Bitcoin-related matters, such as fixed investment and mining, are extremely difficult to achieve a significant leap in the current environment. The specific reasons have been introduced before, and will not be repeated here. If you invest in Bitcoin in 2011, you can achieve a social stratum across 70 floors. In 2013, you can only achieve 20 or so. As for now, considering that 20% of the daily increase will be considered as "surge". It is estimated that the investment behavior associated with Bitcoin will also allow you to cross a layer or two. In fact, although it is politically correct to sing multi-bitcoin publicly in this circle, in the dark, many people are trying new directions. For example, many members of the "bit-monotheism" have begun to vote with their feet. Going to invest, heavy positions, or even send a cottage currency directly.

Therefore, for today's readers, if you want to use the historical opportunity of the encryption market to achieve a substantial traversal of your own class, then the author can give you two general suggestions: on the one hand, you must be diligent, because with the encryption market The rapid increase in the market value, the desire to have a certain proportion of influence and voice in the industry, the amount of work required is much higher than a few years ago, even if you can not always feel the presence, can not let attention Get out of this market. On the other hand, you can't be "too diligent", or to be precise, you can't be too "hard work", because in the ever-changing currency circle, the layout must relax and calm down at the right time, and always think: yourself now Can this thing be done to maximize the ratio of output to investment? If you only look down on the car and don't look up the road, the final result may not be good.

Undoubtedly, this seemingly contradictory solution is enough to make a lot of friends who are interested in laying out the encryption market feel a headache. After all, a perfect balance is very difficult to find, however, as a hundred years, it may even be the largest in human history. The opportunity of a class to cross the opportunity, the window of opportunity to encrypt the market, is destined to be open only to those who have both strength and luck. If you want to pass only passive methods such as “fixed investment”, you will get tens of thousands of yuan from it. The profit of the speculative coin, it seems that some have lost the opportunity, too much pursuit. Only by doing everything you can to get the biggest bonus in the opportunity of the encryption market is the best way to open the industry. It’s a success. Naturally, there is no need to say anything, even if it’s a failure, all the efforts and struggles in this industry. It is also enough for you to recall this time after many years, feel no regrets. (Deputy Sun)

Grin receives another 50 bitcoin donations, and the donor is the earliest believer in Bitcoin.