In the past six years, the average price of BTC dropped more than 80% after the first three scenes appeared. The bull market in the first half of this year ushered in a major danger signal.

On June 27th, the BTC quotes of many exchanges once touched the 14000 integer line. Afterwards, the market quickly reversed, and the market closed back to 12000. The wave of this side has been maintained for two weeks. During the time period, the market still did not find an opportunity to break the deadlock, and as the space in which it operates continued to narrow, the short-term tendency of BTC became more and more blurred in the short term.

However, when I further combed the BTC disk, I found a very dangerous roofing signal. 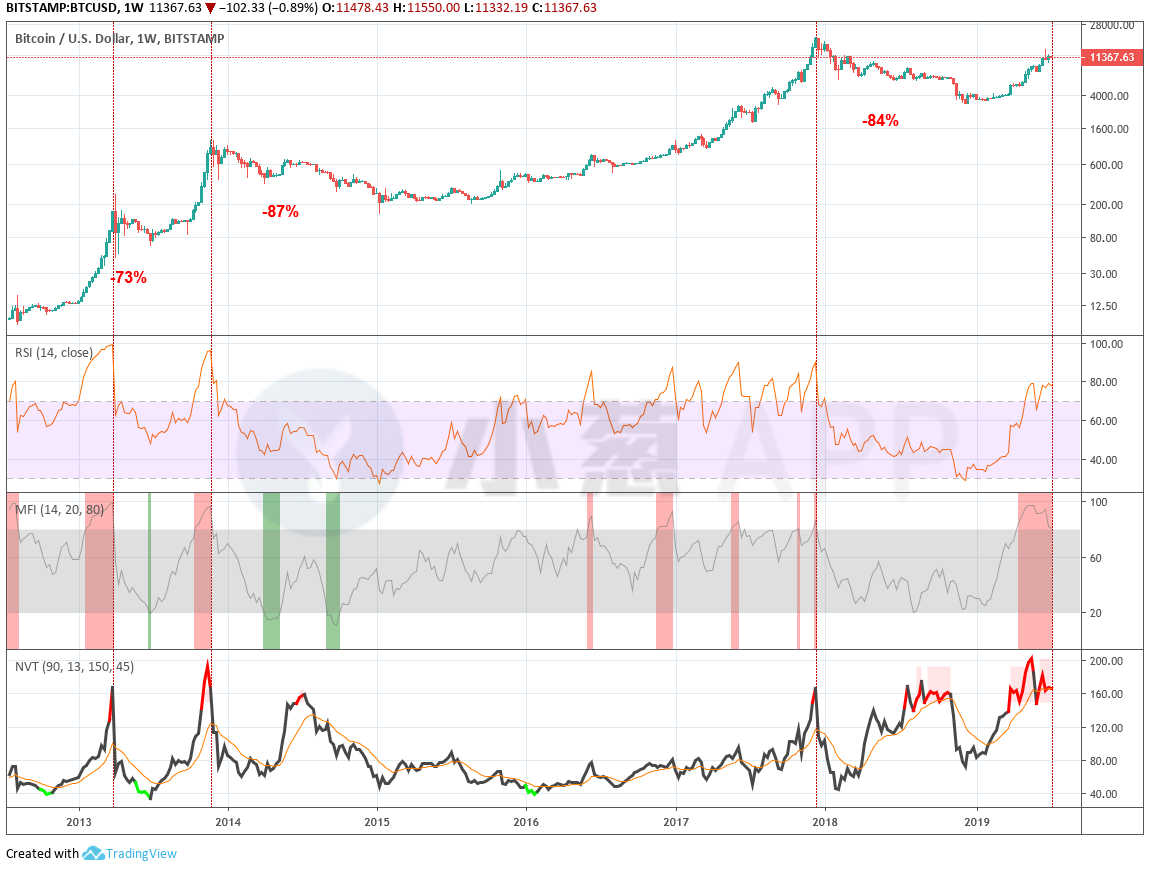 However, if we look at these three indicators in a comprehensive way, the frequency of the three real-time resonance bearish signals in the past six years is actually very low. Before the publication of the document, the three major indicators in the true sense are given the bearishness. The signal only occurred four times in 6 years. Except for the “incurring” indicator synchronous bearish signal, after the first three similar signals appeared, the BTC price appeared 73% in the callback correction process after the bearish signal appeared. 87% and 84% of the amazing decline , and this historical performance, will undoubtedly greatly increase the possibility of BTC ushered in the weekly level.

If the current high point of 14000 is estimated, this potential round of future corrections may cause BTC prices to fall back to around $3,000 , and the lows are expected to occur from the end of this year to the end of 2020. Considering that the NVT indicator's overbought condition after the recent round of highs is even more extreme than that of the big bull market at the end of 2017, it is not excluded that the market will surpass 2018 in terms of strength and duration in the next round of potential downtrends. The possibility of a bear market in the year.

With the MFI indicator almost hitting the overbought threshold of 80 after last week's weekly take-off , the system consisting of these three indicators has actually given a preliminary signal for mid- and long-term roofing. In terms of the signals, the demand for lightening positions in the medium and long-term lines cannot be ignored.

The RSI indicator is widely used and is not explained here.

MFI indicator (Money Flow Index): It can also be called the fund flow indicator. It is actually the evolution of the RSI. The RSI is based on the transaction price; the MFI indicator combines the price and quantity to include it in a comprehensive consideration. It can be said that the MFI indicator is the RSI indicator of the volume.

NVT (Network Value to Transactions Ratio), which is the ratio of the total market value to the daily chain trading volume. The volume on the chain is the transfer that takes place on the Bitcoin blockchain, not the volume of the exchange. Therefore, the exchange brush volume has no effect on this data.

As for the individual application methods of the above three indicators, as well as the "design concept" in some details, it is limited by the length of the text.