"Sino-Russian strong supervision, Japan and the United States to prudently legislate, South Korea's attitude is more stringent", this seems to be the public's inherent impression of the blockchain regulatory policies of various countries.

Mutual chain pulse observed that with the official implementation of the Regulations on the Management of Blockchain Information Services on February 15, China's blockchain supervision is more inclined to "make truth" than the previous "anti-counterfeiting" in 1994. . The supporting policies for promoting the development of blockchain real projects throughout the country have also gradually kept up.

In foreign countries, the United States has incorporated digital currency into its existing securities regulatory system; South Korea has paid more attention to financial support in the blockchain sector while monitoring; Thailand, Ukraine, Marshall and other countries have begun to promote the development of national digital currency. 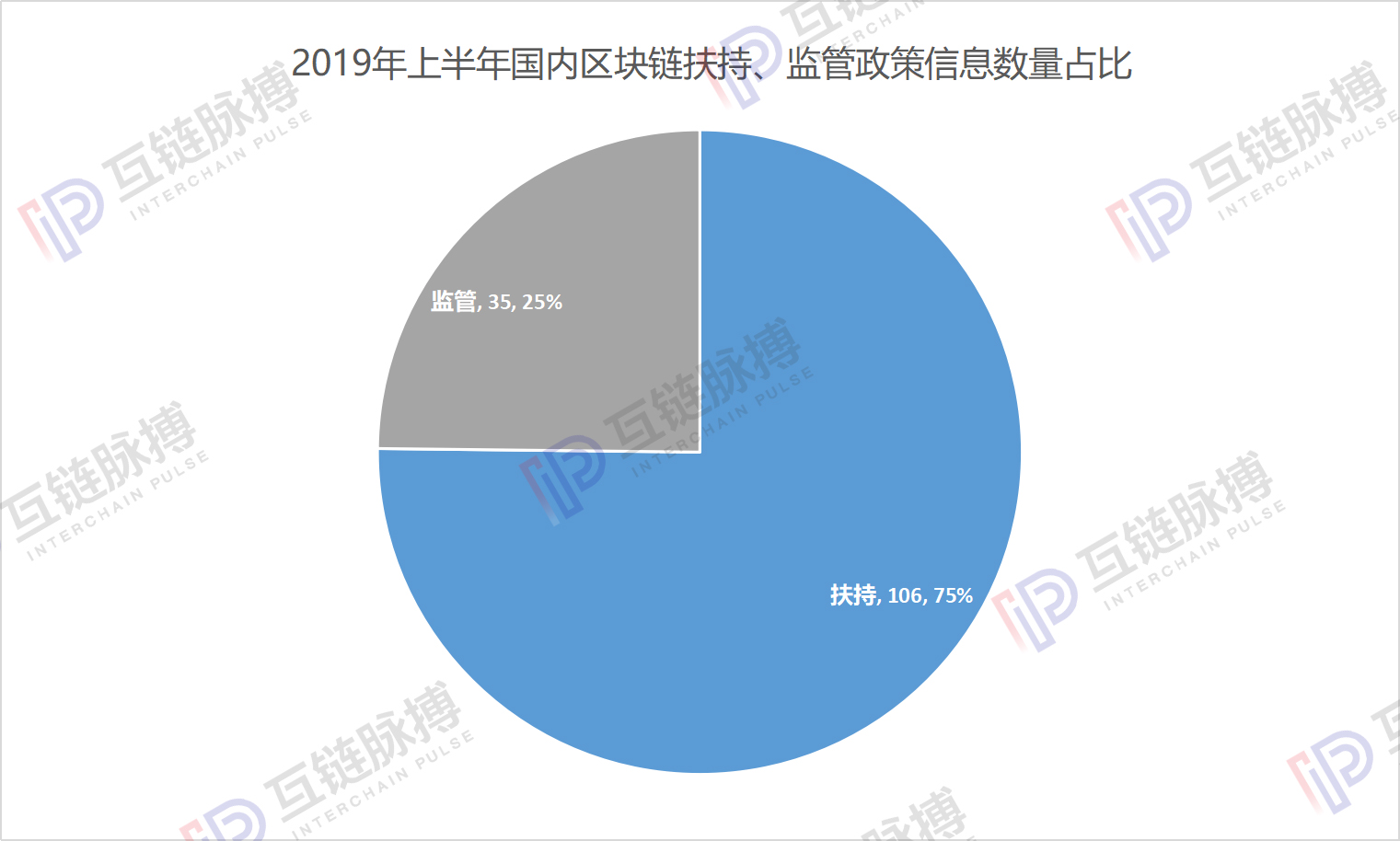 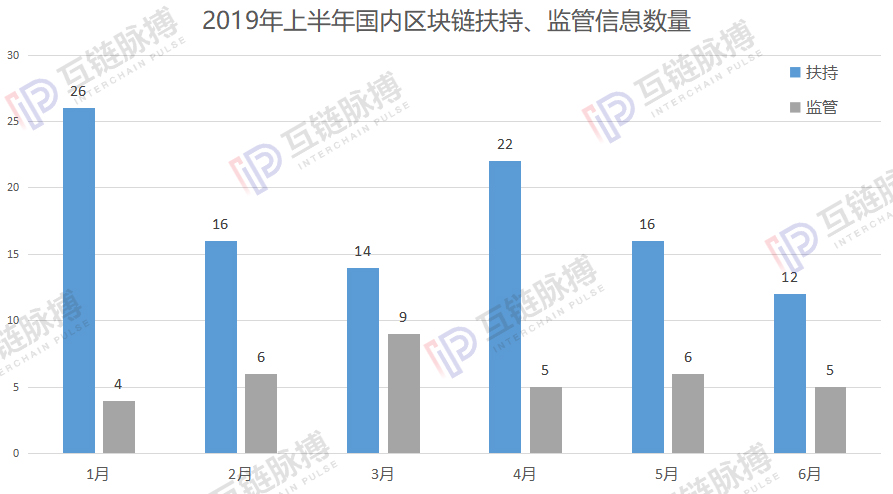 The inter-chain pulse is further counted from the time dimension. In January, the blockchain support policy has the most information, with a total of 26. At the beginning of the year, many provinces and cities have indicated in their work reports and conference reports that they will focus on the development of blockchain. At the beginning of the month, Yuhang District of Hangzhou held a meeting to express the focus on the development of blockchain and other technologies; the Guangdong Provincial People's Government issued a notice on certain policies and measures to further promote technological innovation, including the application of technologies such as blockchain in the financial sector. stand by.

It is not only the areas where Hangzhou, Guangdong Province and other areas have long been placed in the blockchain field. Harbin City, Heilongjiang Province, and Zhangzhou City of Jiangxi Province have also announced relevant support policy information at this time.

The number was second in January, and 22 support policy information was issued in April. There are only 5 support policy information proposed by the ministry. At the beginning of April, the National Development and Reform Commission publicly solicited opinions on the Catalogue of Industrial Structure Adjustment Guidance (2019, Draft for Soliciting Opinions). Compared with the version released in 2013, the 2019 guidance catalogue adds “big data, cloud computing, information technology services and blockchain information services within the scope of the state” to the encouraged “information industry”; in mid-April, the Ministry of Industry and Information Technology publicized A list of pilot projects for network security technology applications, including six blockchain projects.

Except for January and April, the number of information related to blockchain support policies in the first half of the year was basically maintained at 15.

Among them, the most important thing is that on March 30, the National Internet Information Office released the first batch of domestic blockchain information service filing number, and urged the undocumented entity to fulfill the filing obligation as soon as possible.

In addition to the regulatory information in March, the number of blockchain supervision information in the remaining months was basically maintained at five, which was three times different from the support policy information. 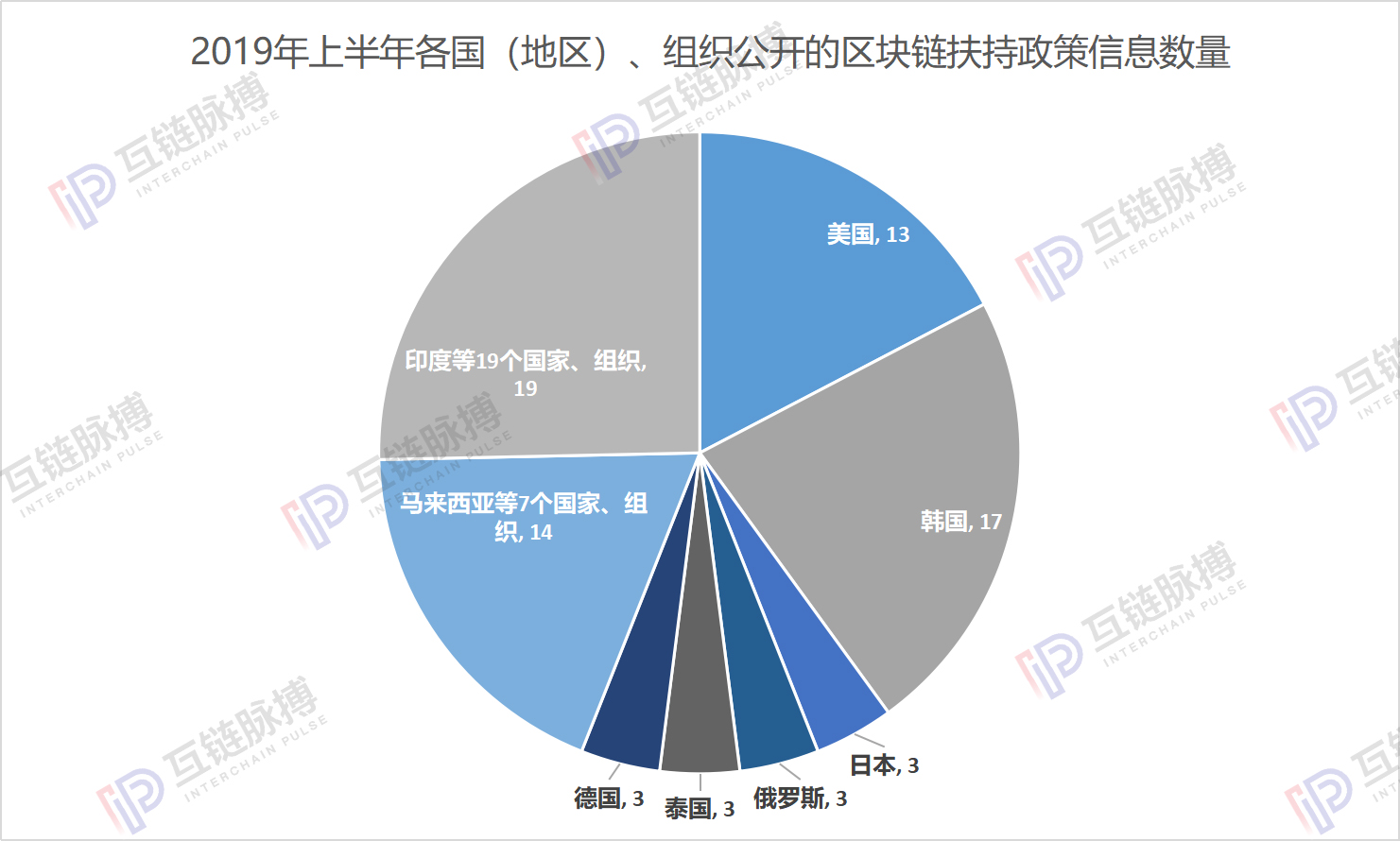 On January 23, South Korea will launch an investment support program, including new growth sectors such as blockchain;

On February 18, the Ministry of Science and Technology of Korea: plans to support 7.9 billion won for the Internet of Things industry, and companies that aim to integrate technologies such as blockchain can participate;

On February 19th, the Seoul government will use the fund to invest in blockchain and other startups;

On March 13, the Busan Port Authority of South Korea will use the blockchain and other technologies to develop the port security system, which will be funded by the Ministry of Science and Technology for 3 years and 1.8 billion won;

On March 21, Gyeongsangbuk-do, South Korea will invest 1.3 billion won to focus on the blockchain industry.

Russia's support information mainly allows cryptocurrency transactions and use; Germany is reflected in the gradual development of blockchain development, research and development proposals, plans to establish research institutes. The “Industrial 4.0 Vision 2030” document issued by the “Industry 4.0 Platform” established by the German government indicates that the blockchain and other workgroups are actively communicating with partners such as China; the more important support information for Japan is June. The Japanese government proposed a policy to promote the adoption of technologies such as blockchain at the "Future Investment Conference." Further promote the integration of blockchain technology and various application areas.

At the same time, the inter-chain pulse observed that not only Thailand, Ukraine, Marshall, Iran and other countries are also carrying out the practice of national digital currency. 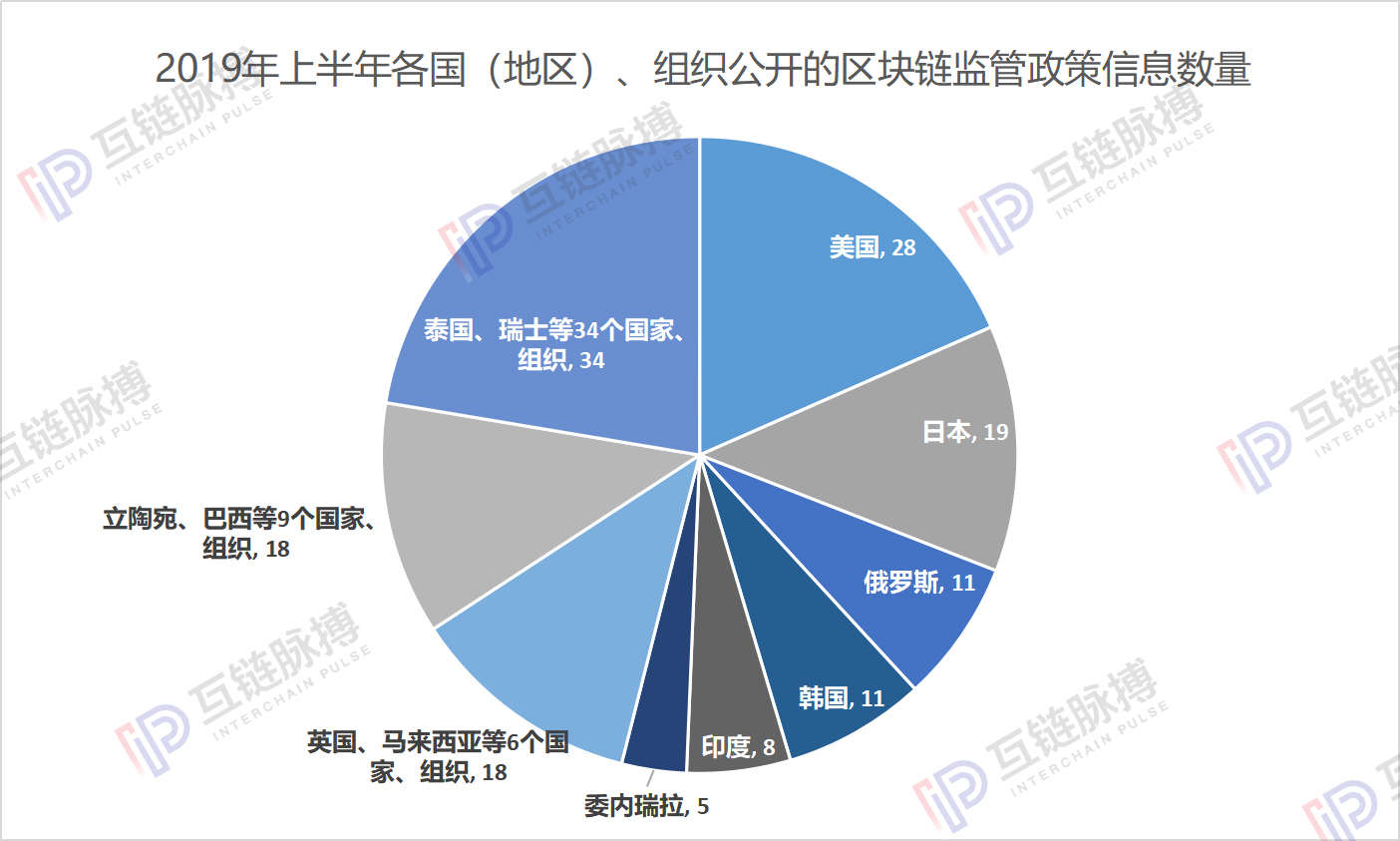 The number of blockchain regulatory policy information in foreign countries is more than the number of supporting information, with a total of 152. Among them, the largest number is the United States, a total of 28, accounting for 18.42%. 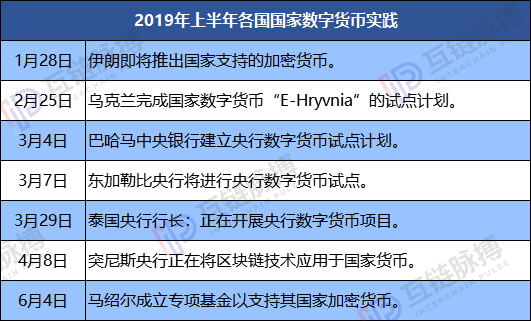 Russia and South Korea have 11 regulatory information respectively. Russia's regulatory information mainly records the process of the Russian parliament's continued promotion of digital financial assets and cryptocurrency-related bills in the first half of the year. The regulation in South Korea is mainly that the supervisory authority has stated that it will maintain the ICO ban; and the blockchain service will be included in the financial supervision sandbox review. In March, South Korea’s highest-level criminal investigation team, such as cryptocurrency, was added. According to the Financial Supervisory Authority, the number of cryptocurrency-related reports and negotiations increased from 53 in 2016 to 453 in 2017, an increase of 8 times. the above.

Like South Korea, countries such as Spain, Rwanda, Ghana, and Malta have also clarified the criminal behavior of cryptocurrencies, launched a response to the practice, and warned the public about cryptocurrency risks. On February 12th, the Bank of Spain warned citizens of cryptocurrency risk; on April 26, the Malta Financial Services Authority issued a guide on encrypted assets and fraud; on May 20, the Ghana police issued a warning to the public about the risk of encrypted hijacking attacks; May On the 30th, the Rwandan central bank warned the nationals to guard against cryptocurrency investment scams.

The release of Libra's white paper by Facebook in late June has made countries more vigilant and pay attention to the regulatory issues of cryptocurrencies. On June 24th, the US House Financial Services Committee said that it will hold a hearing on Libra on July 17. Later, the Bank of Thailand officials said that the Bank of Thailand had set up a task force to review Facebook's Libra; the Deputy Director of the People's Bank of China's Payment and Settlement Division, Mu Changchun, also said that Libra must be included in the central bank's regulatory framework.

With the development of Libra, and the involvement of more international “big manufacturers”. The regulatory situation in the second half of the world and the changes in the support of the blockchain will be worthy of attention.

The last interchain pulse is sorted by statistical country according to the number of policy information as follows: 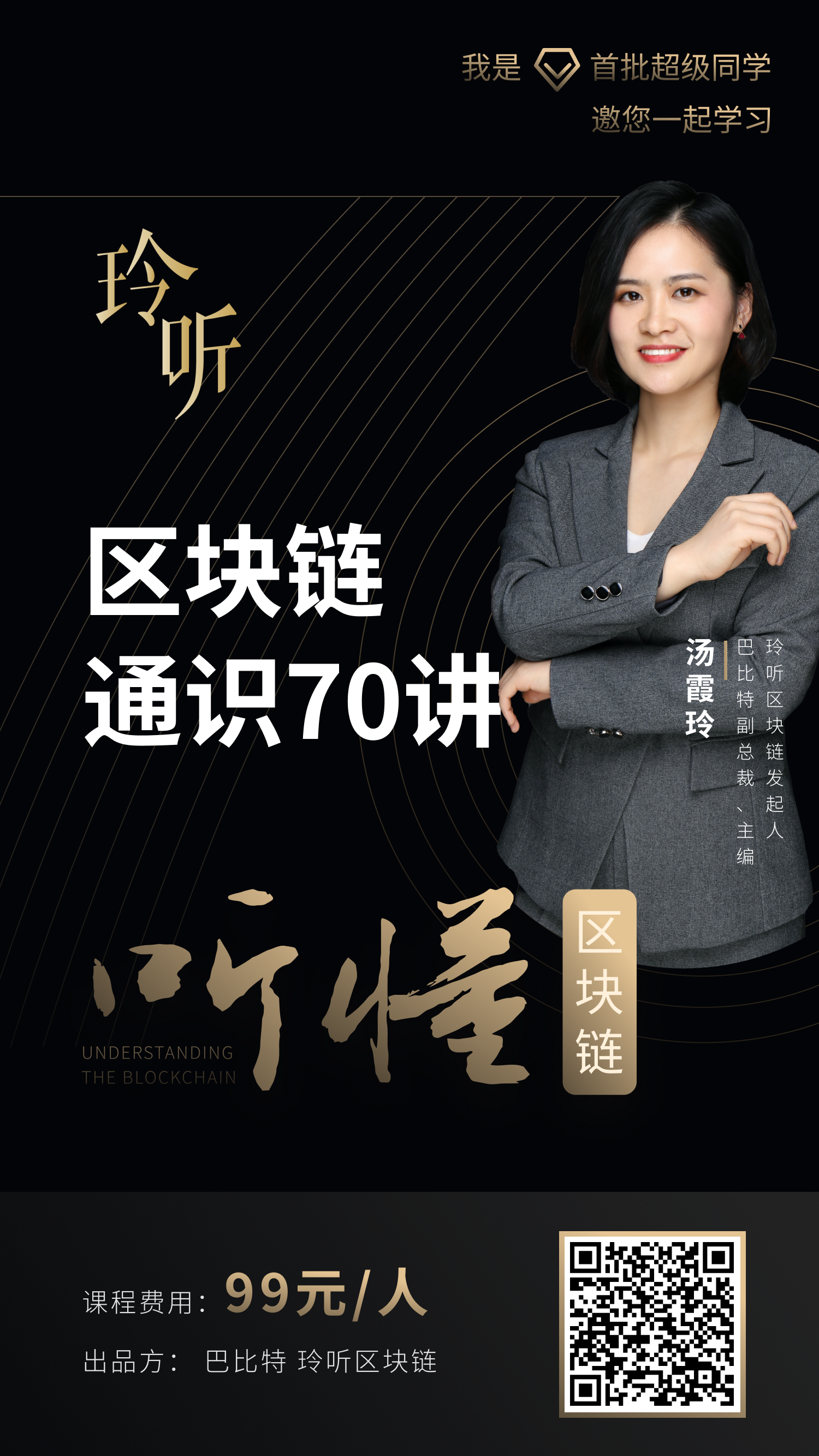 Yang Dong: The registration of blockchain information services should be set up with appropriate filing thresholds.